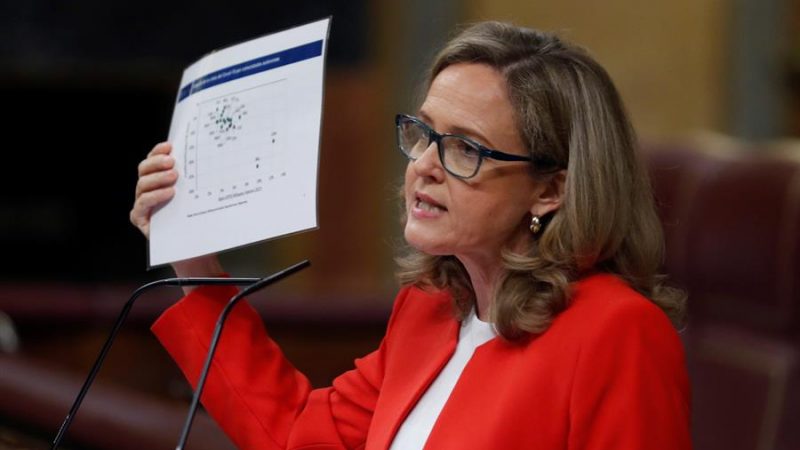 If Spain accelerates the roll-out of ambitious structural reforms, it could receive the first of two or three tranches of a total of €140 billion from the EU recovery fund by the end of the year. [EFE/Emilio Naranjo]

The Spanish government has said it expects to send the draft of its national recovery plan to the the European Commission this week ahead of the official Friday deadline, EURACTIV’s partner EFE reports.

The draft plan, which includes ambitious structural reforms, including an overhaul of the pension and tax system and the country’s labour market, is “almost completed” Spanish Labour Minister Yolanda Díaz said while visiting the EU institutions last week.

Díaz discussed plans to reform Spain’s embattled labour market with European Commission Executive Vice-President Valdis Dombrovskis. According to Díaz, Spain has in the past 36 years experienced an “anomaly” in the labour market related to a structural unemployment rate, very high youth unemployment and an “unbearable precariousness”.

Spain’s number of jobless has now surpassed 4 million, the labour ministry recently reported. Meanwhile, 2020 saw the unemployment rate in the country reach 16.13%, with analysts calling it the country’s worst year in terms of employment since 2012.

Madrid is hoping for flexibility from Brussels in the implementation of its plan, Spain’s Economy Minister Nadia Calviño has said.

The Spanish government, a coalition of the socialist party (PSOE) and left-wing United We Can (Unidas Podemos), has been working hard to meet the deadline this Friday. Initially, the target was to have the draft ready by March.

Spain is set to be the second largest beneficiary of the EU recovery fund after Italy. It hopes to use the money to alleviate the impact of the pandemic on key sectors such as tourism, which accounts for about 15% of Spain’s GDP.

Madrid hopes that the first direct money transfers will arrive before the summer. As soon as they receive the EU’s green light, the countries are entitled to an advance payment of 13% of their allocated funds – a little more than €9 billion for Spain.

“There will be no doubt about the convenience of making a first partial disbursement to Spain” to complete the €27 billion budgeted in 2021 (in the Spanish national budget) for the recovery plan, since it has already fulfilled some of its objectives, Calviño said recently.

EU sources quoted by the financial daily El Economista said a dozen countries are planning to send their investment and reform draft plans to Brussels this week. The rest will send them after the 30 April official deadline. However, the European Commission has said it is not overly concerned with the deadline as it gives priority to the quality of the plans.