A handout photo made available by the Moncloa Press Office shows Spanish Prime Minister Pedro Sanchez attends a press conference after an extraordinary meeting of the Minister Council on the coronaviurs situation at the Moncloa Palace in Madrid, Spain, 17 March 2020. [Handout photo/EPA/EFE]

Police carried out checks at borders with France and Portugal, turning back foreigners attempting to enter Spain as part of strict measures to stem the spread of the coronavirus in Europe’s second-worst-hit country.

More than 20 inmates clambered onto the roof of a migrant detention centre in Madrid in protest against the poor conditions inside, which they said were facilitating the spread of coronavirus. Some inmates had symptoms of the virus and isolation measures were insufficient, according to a letter shared on social media. Firefighters escorted the protesters back down without incident.

Half of the economic assistance measures, which are worth 20% of Spain’s output, are state-backed credit guarantees for companies, and the rest include loans and aid for vulnerable people.

Some €117 billion of the total will be mobilized by the state, with the rest to come from private companies.

The measures will be applied retroactively from 14 March, when Spain declared a state of emergency, a government source said.

Spanish stocks rose by more than 6% after the announcement.

“These are extraordinary measures, without precedent in our country’s democratic history,” Prime Minister Pedro Sánchez told a news conference attended remotely by journalists.

Spain will pay benefits to workers temporarily laid off and suspend mortgage payments for those whose employment has been affected by the outbreak, among other measures.

“We want to protect employment and we want companies to know the government will help them,” Sánchez said. “Nobody will be left behind.”

He said the health crisis had put the brakes on the economy, but would not say whether a contraction was on the cards as in countries like France. He said the government would need a new “reconstruction budget” to deal with the aftermath of the epidemic when it subsides.

More than half of jobs in Spain are dependent on small or medium-sized companies in a country with one of the developed world’s highest unemployment rates.

“I have a little saved up, but I have absolutely zero income at the moment,” said Raquel Las Heras, who runs a booth selling lottery tickets in Albacete, in southeast Spain. “If I stay home like this, I reckon I can last about two months.”

Spain’s 47 million people have been under partial lockdown since Saturday night, allowed to leave their homes only to go to work, buy food or visit a pharmacy or hospital, and hundreds of thousands have been sent home temporarily from companies such as Volkswagen and Burger King.

The Defence Ministry said it would increase the number of troops deployed to police the lockdown including detachments across Madrid’s network of commuter rail stations to prevent crowds from forming at rush hour.

The government reported 182 new fatalities overnight, bringing the total to 491 and making Spain the country with the world’s fastest-rising death toll after Italy. The number of people infected rose to 11,178.

In response, the Health Ministry began distributing more than 1 million surgical masks to health workers, around half of which were donated by China. Police previously seized more than 150,000 such masks from a factory.

Spain shut its land borders on Monday to all but Spaniards, permanent residents and cross-border workers. Trade in goods is not affected. The Balearic Islands – among Europe’s most popular holiday destinations – closed their air space and ports to visitors. 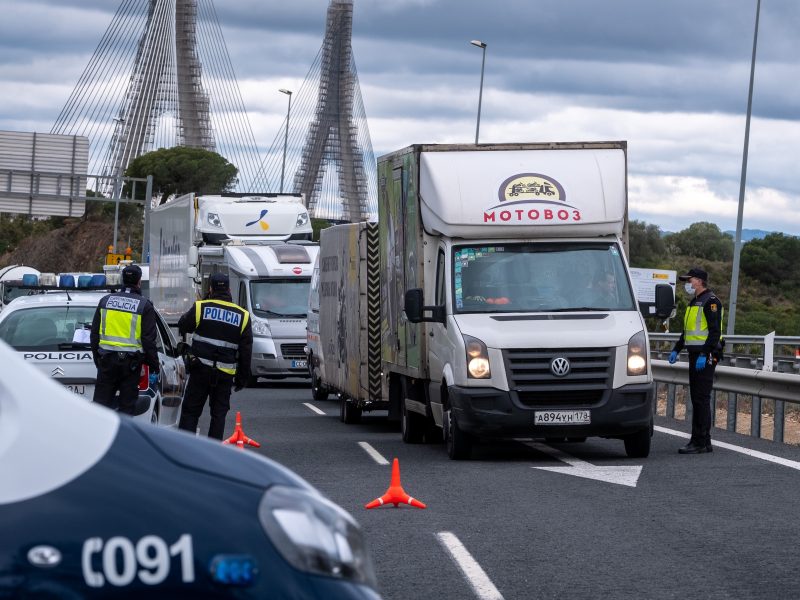 Spain set up police checks at its land borders with France and Portugal on Tuesday (17 March) and turned back foreigners attempting to enter, part of strict measures to prevent the spread of the coronavirus in Europe’s second hardest-hit country.

Cars queued to get into Spain at Vilar Formoso in Portugal as Spanish police wearing protective face masks and latex gloves checked identities and turned back vehicles carrying passengers without permission to enter.

Joaquim Silva, a Portuguese man, wanted to drive through Spain to get back to France, where he has lived for more than 50 years.

“It’s terrible because we live there (in France), we have family there, we have health problems that are being treated there,” he said.