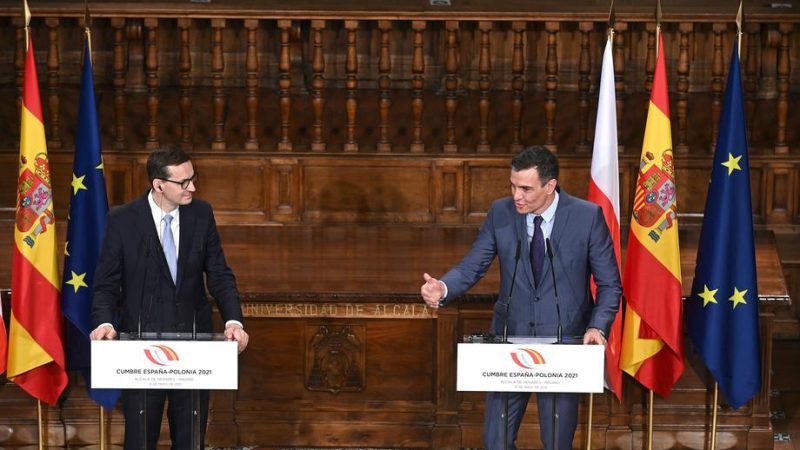 “Given that all member states have already done their part, it is now important that the Commission, ECOFIN and the European Council approve these recovery plans,” Sánchez said on Monday (31 May). “At this time […] a message of certainty must be conveyed by the public institutions, by Europe, to our social agents and to the workers”, he added.

Sánchez spoke after meeting with Polish counterpart, Mateusz Morawiecki, for bilateral talks in Madrid. The EU has approved a recovery fund worth €750 billion, partly financed via borrowing, to help the bloc overcome the economic aftermath of the COVID-19 crisis. The fund has now being ratified by all national parliaments and is awaiting implementation by the EU institutions.

Poland, meanwhile, is set to receive a sum equivalent to almost two-thirds of the country’s annual budget, amounting to €23 billion in subsidies and €34 billion in loans – despite having blocked the initial EU proposal during a spat over the bloc’s rule of law mechanism.

Although the Spanish government of the socialist party (PSOE/centre-left) and left-wing United We Can (Unidas Podemos) and Poland’s nationalist-conservative party Law and Justice (PiS) share some viewpoints, the two differ widely on migration and asylum policy.

While Spain favours a compulsory solidarity mechanism to distribute asylum seekers across the bloc, Poland – together with the other Visegrad countries, Czechia, Hungary and Slovakia – is more reluctant to accept migrants. The two also differ on issues such as abortion and the LGBT+ community.

Poland, together with Hungary, blocked the EU agreement on recovery funds, which was finally reached during the Brussels summit held last December.