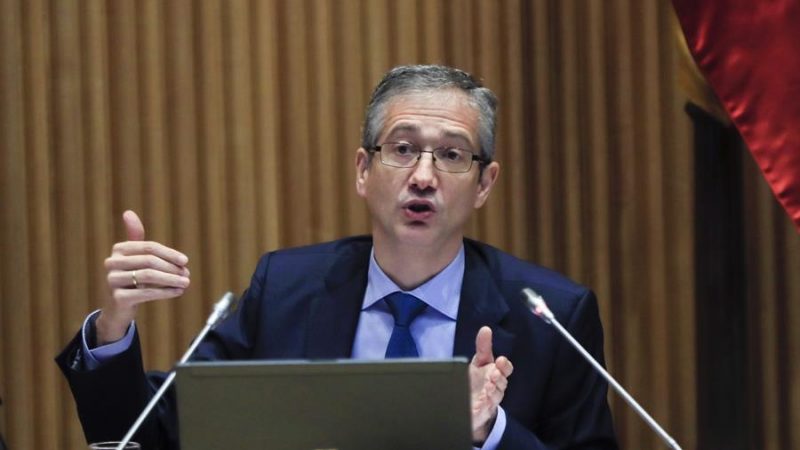 The risks of the crisis caused by the pandemic have been borne by Spanish institutions due to "the improvements experienced over the last decade in the quality of balance sheets and solvency levels", the governor pointed out. [EFE/Fernando Alvarado]

The governor of Spain’s Central Bank, Pablo Hernández de Cos, has stressed in an article published on Sunday (21 February) that banking supervisors must “take measures to mitigate the risks” that the financial sector may incur due to the COVID-19 crisis.

According to the governor, an EU guarantee fund “would make a decisive contribution to guaranteeing financial stability in the euro area and avoid problems of financial fragmentation, both in the short and medium-term,” the Spanish financial daily Cinco Días reported.

As a result, banking institutions could continue to act as a “mitigating – and not amplifying – factor of the economic effects of the pandemic,” he added.

What ‘post-crisis scenario’ in the EU banking sector?

According to the bank’s governor, however, “the Spanish and European banking sectors will have to face the low profitability by deepening efficiency gains, reducing costs and using new technologies more intensively” during the post-pandemic period.

Hernández de Cos reached these conclusions after pointing out that “the deterioration in the results of the institutions observed in 2020 was due, above all, to the anticipation of provisions for credit impairment”.

In his opinion, these contributions would need to be maintained in “the future, since the full impact of the crisis on the payment capacity of customers will be observed with a certain delay”.

In any case, the final impact of the crisis will depend on its magnitude and duration and on the effectiveness of the measures taken by governments and at the EU level to mitigate its effects on households and companies – big ones, and SMEs equally.

The risks of the crisis caused by the pandemic have been borne by Spanish institutions due to “the improvements experienced over the last decade in the quality of balance sheets and solvency levels,” the governor pointed out.

For their part, Spanish companies only see a clear roadmap for economic recovery starting in 2020 at the earliest. Only then, do they expect to return to pre-pandemic and turnover levels.

According to an economic barometer published by KPMG and the Spanish Confederation of Business Organisations (CEOE), 61% of Spanish companies expect to start recovering their turnover in 2021, while 66% do not expect pre-COVID-levels to return until at least 2022.

Successive waves of infections have extended the crisis to the point that seven out of ten companies consider the economic situation in Spain “bad” or “very bad”, although 39% of companies are confident that the situation will start to improve by the end of this year.

The most affected sectors are the hotels, restaurants, and cafes commonly known as HORECA, leisure, tourism, and transport, which have seen their revenues collapse due to lockdowns and restrictions to mobility across the country.