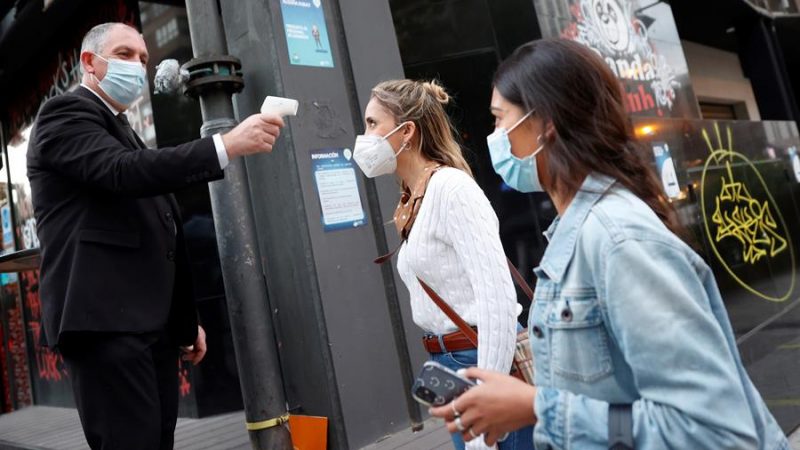 Spain's vaccine roll-out has prioritised the elderly, leaving young people in their 20s unprotected ahead of the summer season. [EFE/Mariscal]

Local authorities in Spain have said they will roll back relaxations of restrictions on party venues and nightclubs as primary healthcare services are having to deal with a rise of COVID-19 cases among the country’s youth. EURACTIV’s partner EFE reports.

Images of crowds of youngsters at parties and nightclubs have been seen across the country as nightlife venues reopen after regional governments relaxed restrictions. Among the country’s youth, aged 20-29, the 14-day incidence rate is now close to 500 cases per 100,000.

Spain’s federation of leisure and entertainment entrepreneurs demanded in a statement published Monday that its sector not again be stigmatised or used as a “scapegoat” for the spike in cases. It pointed to the central government’s “chaotic management” of the night curfew and its relaxing of measures on recreational activities being the cause of the outbreak.

However, in Catalonia, one of Spain’s most affected regions, cases have increased sevenfold in the last 15 days, kicking off a fifth wave of infections.

The northwestern region of Galicia has also reported a 40% increase in COVID-19 cases in the last seven days and in the city of Navarre, authorities have announced that nightlife venues will go back to closing at 1 am instead of 3 am.

Even though most cases are affecting people in their mid-20s – who are not yet vaccinated and generally do not show severe symptoms – primary care health centres across regions are buckling under pressure from the pandemic.

Spain’s vaccine roll-out has prioritised the elderly, leaving young people in their 20s unprotected ahead of the summer season. Only 1 in 10 people aged 20-29 have received at least one vaccine, despite 40% of the country already being fully vaccinated.