Stars seem to align for Spanish economy after disastrous 2020 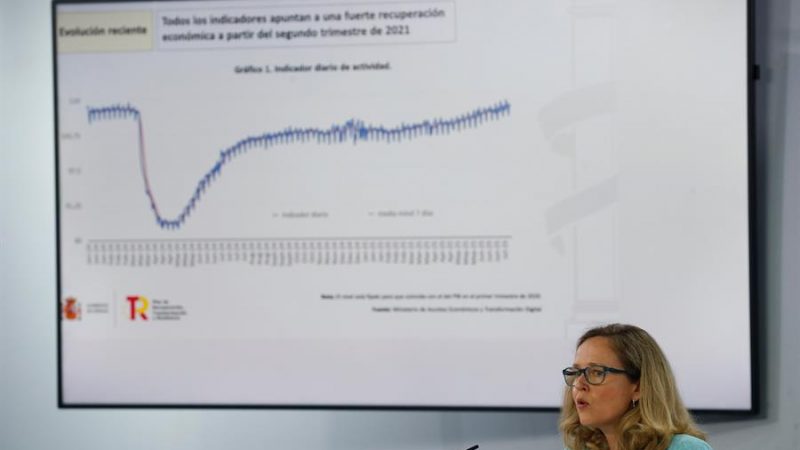 Spain "will recover the level of daily economic activity and employment prior to the pandemic before the end of the year" Calviño stressed at the press conference following the Council of Ministers (Consejo de Ministros). [EFE/ Javier Lizón]

The Spanish economy appears to be recovering faster than expected after a disastrous 2020 marked by the coronavirus pandemic, with the latest forecasts pointing to a robust growth in 2022 and 2023. EURACTIV’s partner EFE reports.

Spain “will recover the level of daily economic activity and employment prior to the pandemic before the end of the year” Calviño stressed at the press conference following a meeting of the Council of Ministers.

Meanwhile, the Bank of Spain also raised its growth forecast this year by one-tenth of a percentage point, to 6.3% as a result of the better than expected performance of the second quarter.

This improvement to Spanish GDP, together with the positive effect of the EU’s Next Generation funds, will allow the Spanish economy to grow by 5.9% in 2022 (one tenth more than estimated in June) and 2% in 2023 (two tenths more), according to the Macroeconomic projections of the Spanish economy 2021-2023 published by the bank on Tuesday.

Optimism in the OECD

The OECD also revised upwards its forecast for the Spanish economy and is even more optimistic than the government: Spain should expect a growth of 6.8%, nine-tenths more than what it had anticipated at the end of May and probably the highest of the OECD member countries.

In its interim Outlook report presented on Tuesday, the international organisation far exceeds the most recent forecast of 6.1% of the Spanish Executive for 2021, but also the 6.2% that had been estimated in July by both the European Commission and the International Monetary Fund (IMF).