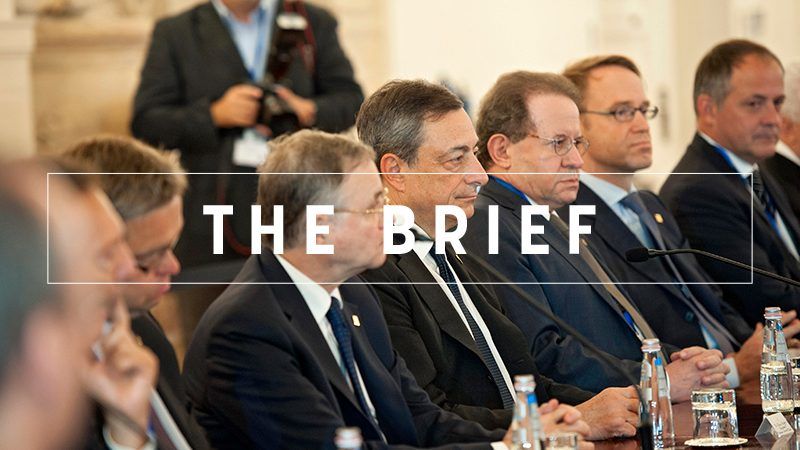 Back in 2016, a delegation of 24 people from the European Central Bank came to Paris. What was a very serious working visit did not bring a smile to the face of then-MEP Sylvie Goulard. And not because of the risks of quantitative easing or lack of bank regulation.

Goulard, who now happens to be number three at France’s central bank, posted a picture of the delegation on her blog. The 24 old white men, pictured here, were hardly a diverse bunch.

Now, anger towards the ECB’s all-male line-up is growing as a new round of nominations rolls around. Two-thirds of the ECB’s top officials are scheduled to be changed within two years, starting with a vice-presidency that should be filled in May.

But Ireland and Spain, obviously totally lacking in imagination, ended up suggesting two men for the job.

The European Parliament’s ECON committee will be grilling them soon, and it won’t be easy for Luis de Guindos from Spain or Philip Lane from Ireland.

The Parliament’s green faction has already written a letter to new Eurogroup President Mario Centeno, highlighting that the two women on the ECB Governing Council account for a mere 8%. The letter also urges gender parity.

Back in 2012, the nomination of the Luxembourg delegate, Yves Mersch, took months: at the time there were no women in top jobs at ECB and he was nominated in the end. Only two women, a German and a Cypriot have made it into top management since.

It’s true that financial institutions tend to be all-male clubs though.

BNP Paribas, one of the biggest European banks, is headed by a team of six men and its 19-strong executive committee is only made up of two women.

Banking giant HSBC is barely any better, with four women sitting on its board of 18 directors.

But when more women work, economies grow. And it’s not as if there have never been any women in economics before.

In the US, the Federal Reserve has been headed with success by Janet Yellen for the last four years. Russia’s central bank governor Elvira Nabiullina was voted Central Banker of the Year for 2017 too. It really shows how much the ECB is lagging behind.

Back in 1918, British women gained the right to vote. One hundred years later, European women could at least be taken into account at the top financial institution.

After months of drawbacks and negotiations a German coalition agreement was reached today. But the mood is far from optimistic.

No other country lectures its fellow EU members as much as Germany. Sweet irony then that the Bundesrepublik is the top rule breaker in the EU, German newspaper Handelsblatt writes.

MEPs voted in favour of a deal to reform the EU’s emissions trading scheme, which has long suffered from a glut of permits and a low carbon price. The EU’s main investment bank granted its largest ever loan, €1.5bn, to a controversial mega pipeline.

Overcoming a decade of enlargement fatigue, the Commission launched its long-awaited Western Balkans strategy. Brussels wants the six countries to do their homework properly before they join the bloc.

Cold water was poured on Bulgaria’s ambition to join Schengen by Dutch Prime Minister Rutte, who also slammed the country for not doing enough to meet eurozone criteria. The Commission’s midday press briefing was monopolised by questions on the EMA

In the clash between MEPs and EU leaders over the Spitzenkandidaten process, the Parliament rejected any back-door deals among EU leaders on choosing Juncker’s successor.

A bid to kickstart transnational lists was defeated by a majority of MEPs, one of whom is the president of the European Federalists. Emmanuel Macron has pledged to continue fighting for the pan-EU measure though.

Jean-Claude Juncker will meet with old-new German Chancellor Angela Merkel. He will likely congratulate her for finally putting together an agreement (nearly). MEPs will vote on whether to scrap the Daylight Savings Time menace.