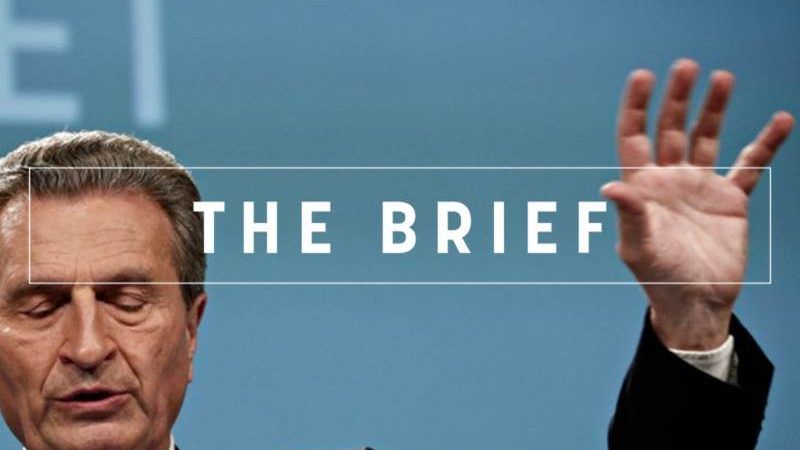 The Commission scrambled to “clarify his position” but the honest reaction came from Donald Tusk, the European Council President. The Pole reminded his EU colleagues about basic democratic principles: “My appeal to all EU institutions: please respect the voters. We are there to serve them, not to lecture them.”

Tusk is right, of course – voters should always be listened to, especially when they vent their frustrations by handing “populist” politicians the keys to power.

In the case of Italy, the reasons are well known: citizens justifiably feel they have been let down by other European countries on the migration crisis while still having unnecessarily brutal austerity imposed on them by the eurozone’s ruling instances, led by Germany.

But Oettinger’s remarks are also a stark reminder that politicians in Europe can only be spurred into action when a serious crisis starts to ramp up.

Take the euro. Those in Brussels who witnessed the 2008 global financial market crash and the ensuing debt crisis can testify – the eurozone is incapable of taking bold decisions unless it is forced to.

Germany bears most of the responsibility for its chronic incapacity to act, and now, reform. After all, its economy is doing well, so why should it make concessions – and financial commitments – to its eurozone “partners” unless it really needs to?

This kind of shortsightedness gave rise to a pattern that has become all too familiar during the debt crisis: financial markets first attack the sovereign debt rating of a country, calling for a credible response at EU level.

Politicians first deny and delay decisions until the pressure from financial markets becomes intolerable and finally spurs them into action.

The pinnacle of the debt crisis brought significant reforms to the eurozone that would have otherwise been impossible: the European Stability Mechanism (ESM), with a maximum lending capacity of €500 billion, the Banking Union (on which Germany is dragging its feet), and stronger macro-economic surveillance with the infamous two-pack and six-pack of reforms (which also made eurozone governance more punitive and less democratic).

But since market pressure has waned, so has Germany’s appetite for reform. This is all the more disappointing since France rejected Marine Le Pen’s populism by electing a reformist president, who unlike his predecessors is willing to play by the EU rulebook.

History will eventually tell whether Merkel is seen as the eurozone’s saviour or undertaker. During the debt crisis, she turned the habit of kicking the can down the road into an art.

No doubt she can do it again. But only if financial markets tell her to. The Italian crisis might just offer the eurozone this opportunity.

For automated driving to succeed, technology is only half the battle. The right legal framework must be in place to cover complex issues like liability and ethics. 2025AD reaches over 10k users per month as it fosters discussion on the key topics surrounding automated driving.

While Italy is running around like a headless chicken, South Tyrol looks anxiously towards Rome. Attentive commentators might have found a secret reason for the uproar in the Mediterranean country.

After 27 months of negotiations, the never-ending story of posted workers came to an end in Strasbourg: MEPs approved a revision of the directive, which became a symbol of division between Eastern and Western Europe.

One attentive German journalist was rather surprised about the suddenly high attendance rate in the holy plenary halls in Strasbourg this week.

After the Commission proposed more spending on Italy and the south and less on the Visegrad Four, and Parliament starts scrutinising the EU’s regional budget reform, watch out for proposed cuts being a major issue of dissent.

Since 2016, the EU has been working on reforms to tackle the problems of refugee registration. While a Hungarian MEP wants to prevent games being played with multiple identities, Austria wants to tie minimum income to German language skills.

The anti-Brexit group backed by billionaire philanthropist George Soros is set to intensify its campaign for a new referendum on whether the UK should stay in the EU.

EU trade boss Cecilia Malmström told MEPs that the EU would activate “immediate” rebalancing measures if US President Donald Trump decides to impose quotas on the EU’s steel and aluminum exports as an alternative to tariffs as early as Friday.

It is trilogue time for the EU clean energy laws: This week might see a breakthrough in negotiations over two crucial energy files on renewable energy and energy efficiency. Follow our liveblog for the latest developments.

To end on a serious note: Sad news reached the world from Kiev, where fellow journalist and Kremlin critic Arkady Babchenko was murdered near his apartment. This comes also at a time where the crackdown on critics manifests in random arrest warrants and travel entry bans.

Vice-President Dombrovskis and Commissioner Moscovici presenting the Commission’s proposals for a program to support reforms and a European stabilization function for investments, new instruments to deepen the Economic and Monetary Union in the EU budget.