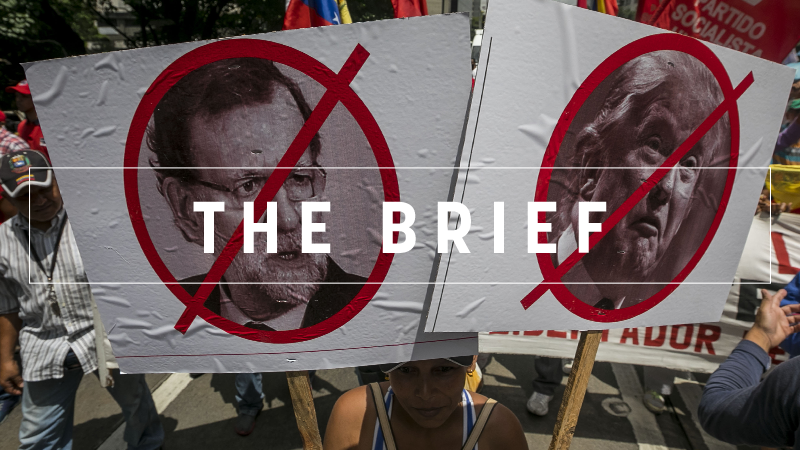 In few days, a trade war blew up in front of our noses, new governments took power in Italy and Spain, and the European Commission beefed up its proposals for its largest expenditure envelopes for the next years.

Even the Catalan conflict that attracted Europe´s (and the world) attention was about to be solved, for now, with the formation of a new executive blessed by Madrid.

Surfacing this torrent of news, comments and reactions stood out a victory of an unglamorous warrior: the institutions.

From World Trade Organisation’s central role in the global trade war to the presidency in the Italian political crisis, and including the judiciary system in the collapse of Mariano Rajoy’s government, or reining in the Catalan pro-independence parties, institutions are holding the line in a world where instability is the new master.

US President Donald Trump represents the biggest threat to the system. His attack against global partners, including the European allies, triggered a trade conflict that could accelerate the end of the expansion cycle.

The EU and China, the other big economic blocs, said that they would challenge Trump’s tariffs at the WTO.

The organisation “is and remains at the centre of a rules-based multilateral trading system,” said the EU’s High Representative for Foreign Affairs Federica Mogherini.

The news broke as the Commission announced that it would also file a complaint against Beijing’s intellectual property practices.

The multi-front war brought new life to the WTO. But the body would face its biggest test in years under the extreme pressure of a president who threatened to pull the US out of it.

As Europe started playing war drums, Brussels and the capitals finally got some good news from Rome. President Sergio Mattarella’s opposition to the appointment of Paolo Savona as finance minister, whose plans to exit the euro were aired, survived the outrage of Five Star Movement and Lega.

Mattarella could not hide a half smile when he announced the members of the new executive, who would include a pro-European foreign affairs minister. Still, voters’ will remains and Italy will be in the hands of two populist parties.

While the market turbulence sparked by the political turmoil in Italy spread across the Southern economies, Spanish prime minister Mariano Rajoy was ousted by the Parliament on Friday.

For Eurogroup president, Mario Centeno, the positive news was that “courts are working and we have to be happy about it.”

Socialist leader Pedro Sanchez took over on Friday, following the first successful no-confidence motion in the history of Spain.

He will also be the first Spanish prime minister who is not a member of the Parliament and whose party did not win in the ballot box. He will be the first Spanish leader capable of having a proper discussion in English with his EU colleagues. And according to some on Twitter, he would be the first to top the list of most handsome political figures.

The EU greeted the new Spanish government and, especially, its intention to maintain the budget greenlighted by Brussels to respect the fiscal rules.

While Rajoy walked toward the exit door, a new Catalan government was about to be sworn in. The pro-independence president Quim Torra desisted from including members in jail or under arrest warrant. The end of Madrid’s intervention in Catalonia could follow in the next few hours.

It was a good week for institutions, but no need to mention that they are far from perfect. The WTO is accused of being slow and inefficient (who remembers its last success in a multilateral round?). The Italian presidency is part of a broader institutional set up that the Italians have failed to reform to break political deadlocks.

And the Spanish judiciary system has a lot of room for progress compared with its European peers.

But disruptive forces, including volcanic presidents, populist waves, corruption scandals or separatist movements, could help to raise the stakes, kill the inertia, and hopefully overcome longstanding flaws. The UN and its Security Council could take note.

For this week, Europe had enough to digest. Weekend rest will be well-deserved (if you are lucky enough to have one).

Dialogue and knowledge transfer between all stakeholders is vital for the acceptance of automated driving. 2025ad.com is the place to go if you’d like to feature and have your voice heard. 2025AD reaches over 10k stakeholders per month as it fosters discussion on the key topics surrounding automated driving.

It is official, Europe finds itself in the middle of a full-blown trade war with the US. As US President Trump hits allies with trade tariffs, Europe started countermeasures ‘within hours’.

A Franco-German response followed quickly to show unity and French President Macron debunked the tariffs as ‘illegal’. Europe and China meanwhile pledged to deepen their relationship despite the trade tensions.

We also see the end of a political career: Spanish PM Mariano Rajoy has been ousted by a no-confidence vote brought by the Socialists – we predicted that his luck will end.

Italy’s populists want to govern after all. The Italian anti-establishment and nationalist parties reached government deal – with a Eurosceptic to oversee Europe.

A spike in unemployment numbers would give EU countries access to €30 billion to maintain investment in times of economic turbulences, according to a Commission proposal.

Poland attaches great importance to history. It is therefore no wonder that it continues to change its history and the names of those who made it, with the help of the state-controlled media.

MEPs want to revive the Schengen area, which has suffered setbacks with the reintroduction of internal border checks in the face of the migrant crisis and terrorist threats.

The UK’s latest crazy plan to have its cake and eat it in Northern Ireland? A North/South Korea-style DMZ buffer zone.

Surprise: Germany’s planned coal commission shows little interest in the climate as it focuses more on restructuring coal-dependent German regions than on reducing CO2. EURACTIV looked into the leaked document.

A hopefully calmer week in (geo-)politics next week.

From Europe to Iran to North Korea, the world doesn’t make sense anymore — unless you put all your illusions aside and think like a Realist.