The Brief, powered by ACCA – How best to deal with the Joker? 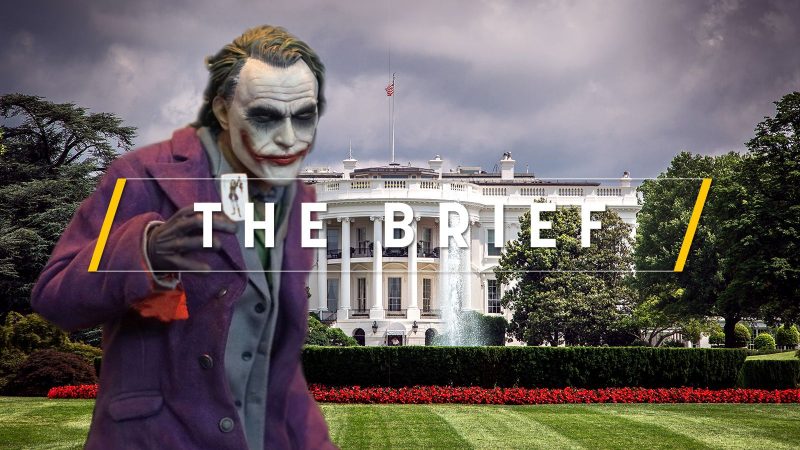 Donald Trump’s looming tariffs on European products will be the most serious and irrational attack against its main trade partner. Europe is still clueless about how to deal with a man whose impulsive behaviour is bringing down the international system.

Our closest ally became our worst nightmare (terrorism aside) since Trump took over in the White House.

He slapped tariffs on steel and aluminum exporters and Spanish olives. He dumped the Paris Agreement and the Iran deal, two initiatives behind which the Europeans threw all their weight. He is about to render useless the WTO, a top priority for the EU as the cornerstone of the multilateral system. And new duties could come against European cars.

Meanwhile, he disregarded the European efforts to rebuild the relationship with a positive agenda.

Still, the latest round of duties over the Airbus case takes his attacks against transatlantic ties to a different level. It is not the first time that Trump slaps tariffs against the EU. But the volume, the sequence and the context make it different this time.

The volume ($7.5 billion worth of goods) represents a record figure for WTO compensatory tariffs and for any duties ever imposed on European exporters.

Once the sanctions are published in mid-October, the Europeans will follow suit early next year, thanks to the ongoing Boeing case. Trump is neglecting the EU’s offer to avoid the mutual pain.

The damage will be particularly serious now. An escalation of the trade war would worsen the economic slowdown affecting both sides of the Atlantic while the risk of a downturn increases.

Not even using Trump’s narrow-minded zero-sum logic could someone see how he could benefit from increasing the tit-for-tat dispute with the Europeans while he is fighting on the Chinese front and the recession is looming.

The trade balance is not going to improve with this strategy, and the EU already made clear it would never surrender its farming sector to US exports, a primary goal for Trump.

Raising the stakes this much to divert attention from the impeachment process is a very high price to pay. If economy always matters, history proved that it especially does in election year (again Carville’s “economy, stupid!”)

Given all the good reasons and solid arguments, the Europeans are still hopeful for a negotiated solution to avoid the new tariffs.

US Secretary of State Mike Pompeo added to those hopes by telling La Stampa that “we will certainly talk to the EU… We will do our best to accommodate each country.”

But these conciliatory words by Trump’s minion barely help to inspire optimism.

Because, as Batman’s butler, Alfred, said, “perhaps this is a man you don’t fully understand.”

The Commission accepted last summer to join talks with the US Administration at gunpoint. The Europeans said they would never negotiate with tariffs in place but they thought it was worth trying to avoid new ones, in particular on carmakers.

The EU tried to please (or even buy) Trump’s favour by increasing the imports of US soybeans and liquefied natural gas.

The EU also flexed its muscles by imposing countermeasures and preparing new ones for the Boeing case.

But all attempts failed to restore any sense of normality.

Emmanuel Macron has been the most successful European leader in handling Trump, walking a thin line between courting and skillful agenda-setting during the G7.

The conditions, however, are different in this case. And since the impeachment was launched, Trump’s descent into irrationality is only increasing.

Against this turbulent backdrop, the Europeans are still doing their utmost to save the multilateral system before its too late, with a fully functional WTO at its heart as the best firewall.

But Trump continues to block their efforts, obstructing the renovation of the Organisation’s appellate body.

In light of the past failures, maybe the EU’s top echelons could find some inspiration by watching Joaquin Phoenix’s ‘Joker’ this weekend.

But as Alfred already warned us, some men “can’t be bought, bullied, reasoned or negotiated with. Some men just wanna watch the world burn.”

The first week of Commissioner hearings came to a close, with 16 out of 26 prospective candidates getting the green light from the Parliament. Estonia’s Kadri Simson, Greece’s Margaritis Schinas and Italy’s Paolo Gentiloni made it through.

Keep up to date with all the von der Leyen drama in our tracker, now complete with video coverage of the hearings.

In Germany, conservative interior minister Horst Seehofer, previously well-known for his anti-migration rhetoric, has had a change of heart and is now considered a “refugee saviour”.

Check out this interview with a former Ukrainian lawmaker who believes Russia is chipping away at the Minsk Agreement every day. A Normandy format summit is expected to take place soon.

Dutch PM Mark Rutte said during a speech on transatlantic ties that Europe needs to up its military spending to keep NATO alive.

Blast-off: EU satellites could help the bloc dominate the battery industry by scouting out raw materials. Europe could use the boost after US tariffs on numerous products were announced.

In necessary Brexit news, UK PM Boris Johnson reportedly told a Scottish court that he will seek a deadline extension if the EU, as expected, gives his new Irish border proposal short shrift.

Here’s the latest edition of Tweets of the Week, covering Brexit, Austria and the now ubiquitous Commissioner hearings.

Commissioner hearings resume on Monday, with Věra Jourová and Josep Borrell taking the floor at 14:30 CET. Poland’s Janusz Wojciechowski will also face MEPs once again. We’ll have the full coverage on our liveblogs.