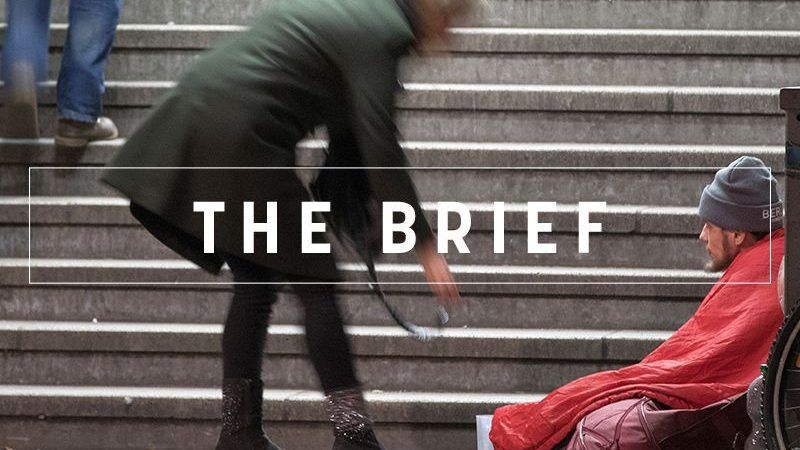 A passer-by donates money to a homeless person sitting at the bottom of stairs at the Friedrichstrasse train station in Berlin on Christmas Day, 25 December 2017. [epa.eu/social-issues-photos/home…]

We have fallen into the trap of the far-right, as we only speak about refugees and migration, argued Wolfgang Thierse, who served as president of the Bundestag from 1998 to 2005. And he is right: the Chemnitz riots show how poverty has turned into a blasting powder keg in Germany.

That millions of German currently find themselves on the brink of poverty and social exclusion has been widely documented in the recent years.

But the political debate in Germany focuses either on the booming economy and the low unemployment rate or migration, as the recent political feud between the CDU and the CSU bitterly showed.

Yet, there is another story behind the far-right riots in Chemnitz, which saw an unprecedented violence against the media. And it is an ugly one.

In 2016, the average share of people at risk of poverty or social exclusion amounted to 23.5% in the EU, while it was 19.7% in Germany, the Federal Statistical Office reported in November 2017 as part of an EU study. That’s 16 million people in Germany.

According to the study, about 16.5% of the people in Germany are facing such precarious conditions because they are paid too little.

The proportion of threatened people is “higher than ever since the unification of the Bundesrepublik and the German Democratic Republic,” the social scientist Christoph Butterwegge told KNA news agency when the report was released.

A study published by the Hans-Böckler Stiftung also in November 2017 shows that assets (houses, cars, jewellery, shares, etc.) are very unevenly distributed in Germany. Ten percent of the population owns 60% of the assets. The lower 50% of citizens have just 2.4%.

The foundation asked the question of how long a German household can keep its head above water until there is nothing left.

The findings are that one-third of the German households could manage for a maximum of a few weeks. Households at the upper end of the asset scale could easily stick their head above water for at least two decades – without further income.

There is also a strong East-West divide, with East German households reaching only half as far as West Germans with their assets.

The European Central Bank (ECB) has also published a report that shows that half of the German households have zero to a maximum of €60,000 in assets after the deduction of debt. In France, the average assets are up to €120,000 – twice that of Germany – while in Italy, they are up to €150,000.

“Germany has a solid social protection system overall, but there are concerns about the future,” the ECB report reads.

“(…)Future deterioration of pension adequacy (…) is expected to increase the risk of poverty in old age, especially for low-wage earners or people with atypical work and interrupted employment history. The gender pension gap is one of the highest in the EU.”

I could go on quoting yet more studies and reports that all go towards the same conclusion.

Looking at the Chemnitz riots, one can argue Germany is paying the price of the changes that have been taking place in the last decade in favour of temporary jobs, contract workers and precarious working conditions in the low-wage sector.

“Material insecurity certainly leads to populist attitudes, even in support of the AfD,” the report from the Hans Böckler Stiftung concluded almost a year ago. “You have to take care of this group of society and deal with their economic problems.”

Now more than ever.

Realizing the potential of an energy-neutral water sector.

It is time to reduce water loss, cut energy consumption and deliver better quality of water to our citizens. The EU´s Drinking Water Directive revision must include clear objectives to accelerate investments in a sustainable drinking water management. Learn more about how Danfoss is rethinking the water sector.

Ten years after the Lehman bust and with economic growth back on track, average citizens still feel betrayed. And while the next crash could be brewing in Italy, commentators suggest that it is the financial crisis that gave us Trump and Brexit and the worst is yet to come.

The European Commission proposed on Monday (9 September) a redistribution of the existing quota for non-hormone produced beef in order to address the US’s longstanding demands to have a bigger share.

Meanwhile, the most recent move of US President Donald Trump was to end aid for a UN Palestinian aid agency that assists three million refugees.

After resigning from the front benches in July, former foreign secretary and Brexit hardliner Boris Johnson, renewed his attack on Britain’s government.

While an expert group warns that a ‘no deal’ Brexit would be ‘chaotic and severe’, a recent opinion poll suggests that Britain’s exit from the EU could tempt Scots to vote to sever ties with the UK in a second independence referendum. It is therefore even more surprising, that Brexit was absent from the Commissioners’ input for state of the EU speech.

Sweden’s Social Democrat PM Stefan Löfven has probably never stood so alone: roasted by the right for leaving the door wide open to asylum-seekers and lambasted by the left for later slamming it shut.

While it appears that the EU thinks that recycled plastic is safe for food packaging, food safety activists say that ‘there will always be a risk’.

With the kick-off of the school year around Europe, Denmark asks itself if the country has too many academics.

Data protection will be one of the priorities for the next European Parliament, a recent forecast shows.