The Brief – Who will be the next Eurogroup president? 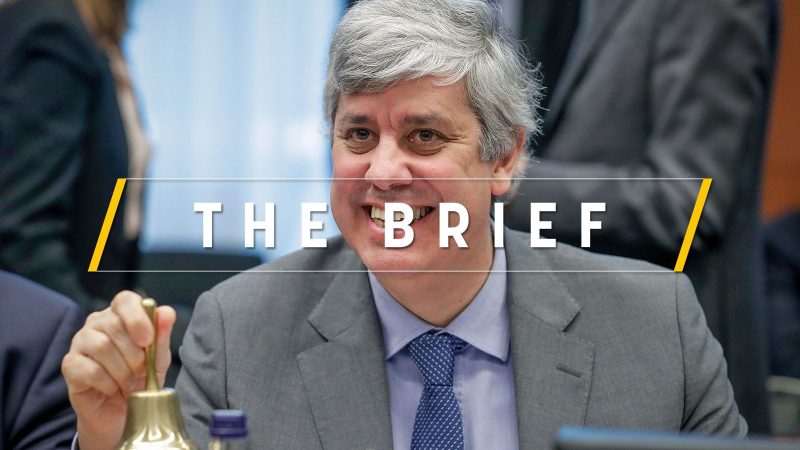 The race for the Eurogroup presidency is (unofficially) on and it is still unclear if the current holder, Portuguese Finance Minister Mario Centeno, will stay in the job. But the names of possible candidates to chair eurozone meetings during a critical period for the common currency are already doing the rounds.

By 2023, the next Eurogroup president will have handled the completion of the banking union, the proposal for a European Unemployment Reinsurance Scheme, the review of the EU’s fiscal rules and, if things turn bad, the impact of the next recession.

In an interview with the author of this Brief in Davos, Centeno said “no decision” has been made yet. “I like a lot what I do, but a term is a term,” he added.

He is not the only one to blame for this lack of clarity. His prime minister, Antonio Costa, may decide to pick him as the next governor of Portugal’s central bank, a post which will be up for grabs in June, just a few weeks before his Eurogroup mandate ends on 13 July.

Neither Costa nor Centeno really know at this stage what they want, but most likely Centeno would be reelected if he decided to stick around, according to half a dozen officials and diplomats close to the Eurogroup consulted by EURACTIV.

“I don’t think there would be much resistance,” a diplomat from a large eurozone member said.

In case he drops out of the race, some candidates are starting to emerge. For some, Spanish vice-president for Economy, Nadia Calviño, is the frontrunner.

Calviño is well considered by a large number of her colleagues, because of her knowledge of the dossiers gleaned during her 12-year experience at the European Commission.

Following her failed bid for the IMF leadership last summer, Pedro Sánchez gave her a bigger clout in the new coalition government.

Her name would appear to be a safe option for the socialists, who will undoubtedly fight to retain the chair, and it would help to make progress on gender balance among the EU’s top posts.

But some diplomats are rather concerned about the lack of geographical balance. “Is the Eurogroup a southern chair these days?,” one of them said.

Southern member states currently have considerable weight in economic posts: the economic Commissioner (Paolo Gentiloni), the Parliament’s chair of the ECON committee (Irene Tinagli), the banking supervisor (Andrea Enria), the banking authority (José Manuel Campa), and some even include the ECB chief in this context (France’s Christine Lagarde).

But this time around, party lines could play a bigger role than the geographical bloc, according to a European official.

The Liberals may put forward their own champion for the race. One of the names flagged by various sources is Pierre Gramegna. The Luxembourgish minister is one of the most senior members of the Eurogroup, and his seven-year experience would be an asset when it comes to looking for support across the aisle among centre-right ministers.

For the time being, Calviño is playing it close to her chest. Her team does not want to speculate about her future plans but underlined her good relationship with Centeno.

More clarity could come once the ministers decide who will chair the Eurogroup’s preparatory meetings in the next few weeks.

The chair of the Eurogroup Working Group, Hans Vijlbrief, has been called back to the Netherlands to lead the tax authority, after a scandal forced the former tax boss to leave.

The election of a northern candidate would play in Calviño’s favour. Most officials, however, admit that it is too early to speculate, even more so given that it is unclear what Centeno would do. And consensus candidates tend to emerge at the very end.

In the end, as one diplomat said, if there is no clear consensus, “a Luxembourger or a Belgian fills the void”.

French President Emmanuel Macron will pay his first visit to Poland on 3 and 4 February. With the two countries not seeing eye to eye on several issues, including the rule of law and climate protection, this is expected to be an interesting meeting.

5G security standards are set to be bolstered across the EU, amid fears that non-EU states may be trying to infiltrate the next-generation mobile technology networks. The EU has pledged not to exclude any specific suppliers, despite US pressure against the Chinese tech giant Huawei.

In a surprise move, EU foreign affairs chief Josep Borrell said he intends to visit Ukraine in the coming weeks, including the disputed region of Donbas which is under the control of pro-Russia separatists.

Modernisation and structural problems are some of the biggest challenges for rural areas across Europe, along with shrinking demographics, urban migration or digital transformation. Smart villages are an increasingly popular concept that may counter those negative trends.

Washington, the European Union’s main ally, has in recent years earned the reputation of a country that creates rather than solves problems. But the EU can now normalise and restore recently broken relations with Moscow, writes the Russian ambassador to Croatia, Anvar Azimov.

Commission, Parliament and Council presidents meet for a ‘Presidents’ retreat: Preparing the future’.