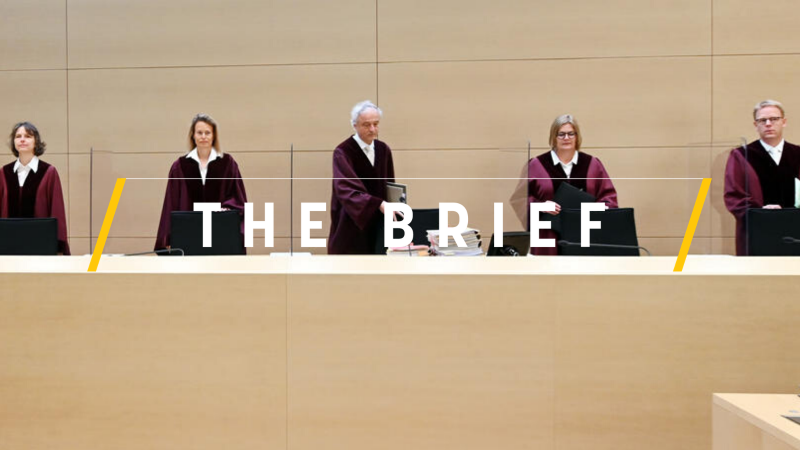 The Brief is EURACTIV'S evening newsletter.

Who needs Eurosceptics when you have the German constitutional court?

For those who covered the eurozone debt crisis and the stuttering response by EU political leaders – until European Central Bank boss Mario Draghi rescued them – Tuesday’s (5 May) ruling by the constitutional court in Karlsruhe landed with a grim sense of inevitability.

In another verse from the Old Testament of Bundesbank dogma, the Karlsruhe court states that the ECB’s Public Sector Purchase Programme must be reassessed and that the bank should not be distracted from its price stability goals by economic policy.

The consequence is that the Bundesbank has the option to withdraw from the ECB’s programme, if it is not satisfied, in three months’ time – which would be a major blow to the eurozone.

The ruling relates to government debt worth €2.1 trillion, bought by the ECB since 2015, with the justices at pains to stress that it does not cover purchases in the coronavirus crisis, including the ECB’s new €750 billion bond-buying programme.

But that hardly matters.

The timing of the ruling, just when the EU is drawing together a badly needed financial rescue programme needed to shield several member states from market attack following the pandemic, is about reducing the EU’s options for the economic recovery.

The justices argue that the ECB’s independence ends when it gets into “economic policy” as opposed to “monetary policy”. That is not new – Bundesbank leaders have been parroting this line for years. But it is naïve in the extreme to think that the two can be disconnected.

More sinister is the attack on the European Court of Justice’s 2018 ruling on the programme as being not “comprehensible” and “ultra vires” [overstepping one’s authority].

What is most frustrating is that these cases are not about economics or sound money. They are political acts designed to prevent the ECB from acting like a normal central bank and, instead, measuring it for a strait-jacket.

The plaintiffs included Bernd Lucke, a former MEP for the far-right Alternative für Deutschland party, and academics whose end goal is the break-up of the eurozone. That goal, it appears, is shared by the court justices.

The ECB now has the happy job of explaining to the German justices why its bond-buying programme is “proportionate”.

Perhaps the ECB could also furnish the justices with the impact assessment that they also requested, pointing to the economic carnage that would have been (and could still be) caused if Italy or Spain was to tumble out of the eurozone?

The Karlsruhe court will, again, be quietly ignored by Angela Merkel’s government. But that is not enough.

The truth is that if the top court in Poland or Hungary made such a transparently political ruling that sought to infringe on the independence of an EU institution and rubbished the European Court of Justice, they would be roundly – and promptly – criticised.

A virtual meeting of EU and Western Balkan leaders to discuss the future of the region on Wednesday will produce a final declaration that is set to omit the word “enlargement” altogether, instead focusing on EU support during the COVID-19 pandemic and the importance of continued adherence to European value and reforms.

The draft declaration of Wednesday’s EU summit with the leaders of the Western Balkans, seen by EURACTIV,calls on North Macedonia to find a solution to bilateral disputes in the implementation of the Treaty on Good Neighborhood Relations with Bulgaria.

Even if Russia has said that it is up to Finland to decide on its possible NATO membership, such a decision would still have negative implications for the bilateral relations, according to a study commissioned by the previous Finnish government.

Most EU countries are seeing a “substantial decrease” in cases of COVID-19, and Bulgaria is the only EU country where coronavirus cases are increasing, the director of the EU’s disease control agency said.

Nine out of ten people living with rare diseases across Europe have been adversely impacted by the coronavirus pandemic, including three out of ten who said that this has caused “life-threatening” disruption, according to a recent study by EURORDIS-Rare Diseases Europe.

The EU’s bid to regulate online platforms, the Digital Services Act, is likely to address a number of competition issues related to the digital economy, possibly through a new competition tool, the European Commission’s Vice-President for Digital, Margrethe Vestager has said.

More than 200 of the world’s foremost economic experts spelled out their wishes for a post-coronavirus recovery, ranking airline bailouts last in order of climate-friendliness and long-term economic benefit.

3 responses to “The Brief – With friends like these in Karlsruhe…”