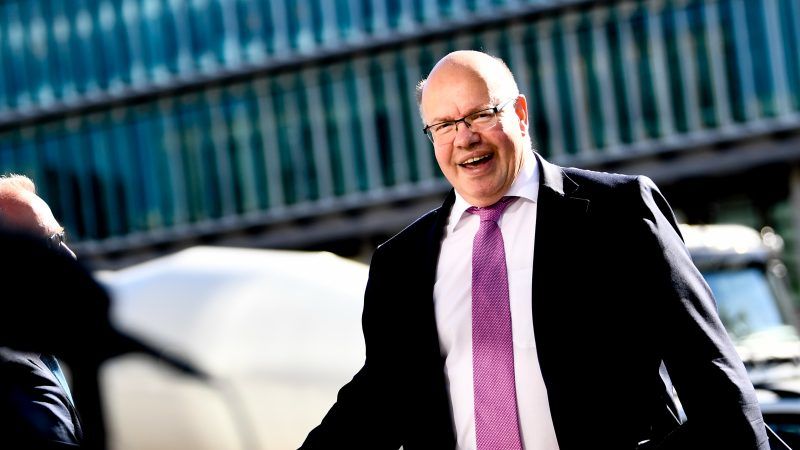 German Federal Minister of Economy and Energy, Peter Altmaier arrives for a board meeting at the CDU headquarters in Berlin. [Filip Singer/EPA]

Germany’s economy minister on Sunday lashed out at US President Donald Trump, slamming his global trade rows and efforts to “dictate” Europe’s dealings with Iran through renewed US sanctions.

In an interview with German weekly Bild am Sonntag, Peter Altmaier warned of the damaging consequences of a full-blown US-China trade war and expressed concern about Trump’s decision to slap hefty metals tariffs on Turkey in an escalating diplomatic row.

“This trade war is slowing down and destroying economic growth, and creates new uncertainties,” Altmaier said.

“The past has shown that consumers suffer most in trade wars because goods become more expensive,” he added.

Trump has already slapped punitive tariffs on Chinese imports worth $34 billion and additional levies on $16 billion in Chinese goods will kick in later this month, with Beijing vowing to respond in kind.

Trump also announced on Friday that he would double tariffs on steel and aluminium from Turkey, pushing the lira to historic lows against the dollar.

The brewing trade conflict comes as the two NATO allies remain at loggerheads over the detention of an American pastor and a host of other issues.

Altmaier, however, welcomed a recent easing of transatlantic tensions after European Commission chief Jean-Claude Juncker and Trump agreed to hold off on imposing new tit-for-tat tariffs for now.

The deal has “secured hundreds of thousands of jobs in Germany and Europe” but was only “the first step”, he told Bild.

“At the end of the day, we need global trade with lower tariffs, less protectionism and open markets,” Altmaier stressed.

Turning to the reimposition of US sanctions on Iran after Trump unilaterally quit the 2015 nuclear pact, Altmaier stressed the importance of keeping European business deals in Iran alive.

A raft of companies, including German carmaker Daimler, have already announced they are pulling out of Iran because of the sanctions, which ban transactions involving US dollars.

“We will not let Washington dictate our trade relations with other countries and that’s why we stand by the Vienna nuclear agreement to prevent Iran from producing atomic weapons,” Altmaier said.

“Both nationally and in Europe, we are looking for ways to keep financial channels open,” he added.