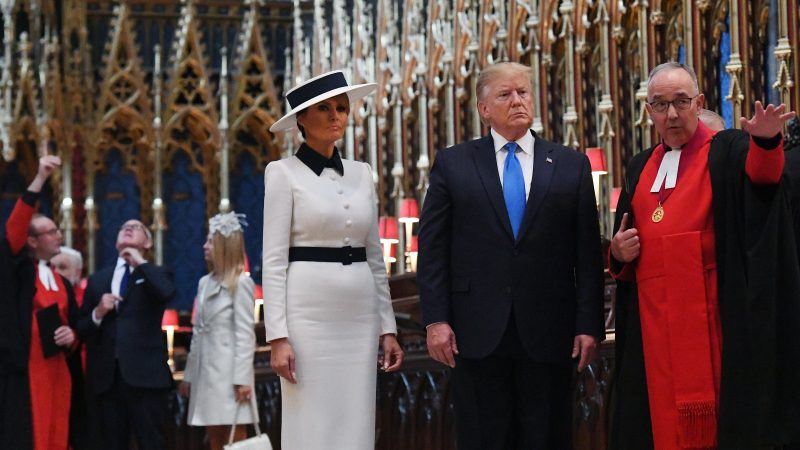 US President Donald J. Trump (C) with Dean of Westminster and a chaplain to the Queen Elizabeth II John Hall (R) and US First Lady Melania Trump (L) take a tour of Westminster Abbey in London, Britain, 3 June 2019. [Andy Rain/EPA/EFE]

US President Donald Trump meets outgoing Prime Minister Theresa May on Tuesday (4 June) for trade-centred talks during his state visit to Britain, with protesters set to gather outside the gates.

After a glittering banquet thrown by Queen Elizabeth II on Monday, the second day of Trump’s trip turns from pomp and ceremony to politics and business.

The president’s three-day visit — centred around Wednesday’s D-Day 75th-anniversary commemorations — comes at a tricky time for Britain, with May stepping down within weeks over her handling of Brexit.

The UK-US “special relationship” has been under strain over different approaches to Iran, the use of Chinese technology in 5G networks, climate change, and Trump’s personal politics.

May is due to step down as leader of the governing Conservative Party on Friday, her Brexit strategy having imploded after nearly three years in the job.

Some 13 candidates so far are jostling to replace her as prime minister by late July.

Trump has weighed in on Brexit, saying he would walk away from the European Union without a deal if he could not get a deal he liked.

He has also said he would like to strike a quick trade agreement once Britain leaves the EU.

“Big trade deal is possible once UK gets rid of the shackles,” he tweeted Monday.

Trump and May are set to co-host a business breakfast meeting at St. James’s Palace with five top companies each from Britain and the United States.

“It is a great partnership, but one I believe we can make greater still,” May was to say at the business round-table, according to her Downing Street office.

“With a bilateral free trade agreement, with broader economic co-operation… there are opportunities to seize.

“Through dialogue like this we can ensure that our economic partnership not only endures but continues to grow stronger for many years to come.”

May, Trump and their teams were then set to hold talks at Downing Street, followed by lunch together and press conference.

State visits are filled with ceremony, personal touches, gifts and fancy dinners — this one being no exception.

The three-course lunch in 10 Downing Street’s state dining room will consist of Paignton harbour crab, followed by Lake District beef fillet and an Eton mess with peach for dessert.

May will give Trump a copy of one of the most significant documents in the transatlantic “special relationship” — a framed copy of Winston Churchill’s personal draft of the 1941 Atlantic Charter, which defined the Allied goals post-World War II.

Trump and May will also go on a private tour of the Churchill War Rooms, the bunkers from which Britain’s wartime prime minister ran his operations.

Outside, thousands of leftwing anti-Trump protesters are due to rally in London’s Whitehall government district, headed by Labour opposition leader Jeremy Corbyn.

The demonstration will rally round a giant inflatable balloon mocking Trump by depicting him as an orange baby.

When Trump visit Europe, we inflate the helium baloon, to salute him. pic.twitter.com/V6z2QzvZT2

Corbyn, in his capacity as leader the opposition, was invited to Monday’s state banquet but boycotted the occasion, accusing Trump of “racist and misogynistic rhetoric”.

He said the protest was “an opportunity to stand in solidarity with those he’s attacked in America, around the world and in our own country”.

Corbyn is a late addition to a bill of left-wing lawmakers, trade unionists and protest regulars set to address the crowds.

Trump’s day will be rounded off with a dinner at the US ambassador’s Winfield House residence.

The heir to the throne Prince Charles and his wife Camilla will attend on behalf of Queen Elizabeth.

At Monday’s state banquet, Trump hailed the sovereign as a “great, great woman” as the Trump dynasty joined the royal family in the Buckingham Palace ballroom.

On Wednesday, May and Trump will conclude the trip by joining other world leaders in the English port of Portsmouth to commemorate 75 years since the D-Day landings, which changed the course of World War II.