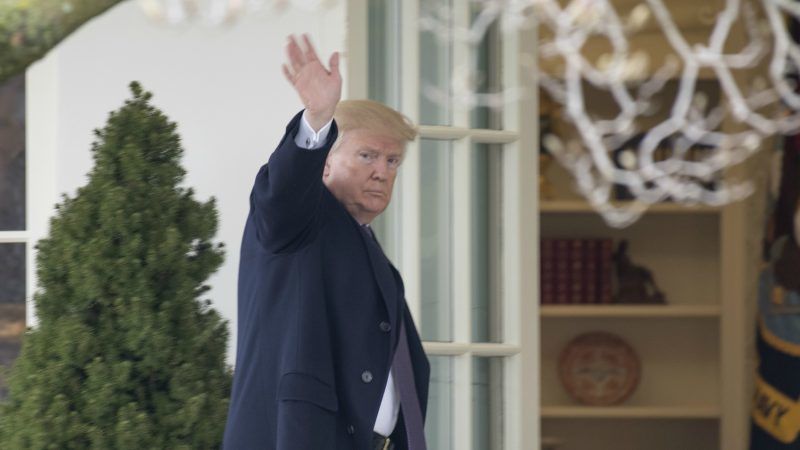 US President Donald J. Trump waves to the press pool as he walks to the Oval Office after returning to the White House, 7 March 2018. [Pool/EPA/EFE]

EU trade commissioner Cecilia Malmström warned yesterday the EU administration to step back from the brink of a trade war. She said the expected US decision would come under section 232 of a 1962 U.S. law that allows safeguards based on “national security”, adding that the EU cannot see how friends and allies can be a threat to the US national security.

Malmström said she still hoped the EU to be excluded, but if a move like this is taken, thousands of European jobs will be put in jeopardy, and a “firm and proportionate response” would follow. This includes new tariffs on US products such as whiskey, peanut butter, orange juice or motorcycles, including the Harley Davidson brand.

The Commission’s choice of US products to “re-balance” benefits seems to be ideologic and intended to punish voters in the southern states who predominantly supported Trump at the 2016 election.

EURACTIV asked Malmström what would happen if in the case American Bourbon is taxed, the US would tax back Irish and Scotch whisky for example. She said a list of such products would be very soon shared with member states and made public, but didn’t answer the question in essence.

The White House signalled yesterday it would water down plans for contentious tariffs, in the face of threats from trade partners, financial market jitters and a revolt within Trump’s own Republican party.

The US administration said the president still plans to sign off on global steel and aluminium tariffs as early as Thursday, but indicated there could yet be exemptions for infuriated allies.

“There are potential carve-outs for Mexico and Canada, based on national security. And possibly other countries as well,” press secretary Sarah Sanders told reporters at the White House.

From shortly after dawn, administration big guns rushed to the cameras, trying to limit the fallout from a Trump policy that has already sparked fears of a global trade war, rattled stock markets and prompted the top White House economic advisor to quit

Commerce Secretary Wilbur Ross insisted the tariffs were “thought through” and not the caprice of a president running a White House that appears to be careening off the rails.

“We’re going to have sensible relations with our allies,” he told CNBC, “we’re not looking for a trade war.”

Can someone tell me why Wilbur Ross is still commerce secretary?

He is under investigation by the European Parliament for insider trading

Markets sold-off early morning on news that Wall Street favorite Gary Cohn had resigned from the White House in protest at Trump’s decision.

Treasury Secretary Steve Mnuchin joined the damage limitation effort, claiming that the tariffs, although still in flux, would not hurt the administration’s projections for three percent growth.

“We’re comfortable that we’re going to manage through this so that it is not detrimental to our growth projections,” he told Fox Business.

Mnuchin is under fire for asking a video on the occasion of his participation to a discussion in UCLA which turned out to be embarrassing for him.

Trump's Treasury Secretary Steve Mnuchin doesn't want you to see this video of a 6th grader asking him how he… https://t.co/gVAdNauMAd

In Washington, a fierce battle over Trump’s proposals raged behind the scenes.

Trump’s move has surprised and angered allied lawmakers and the Republican-controlled Congress has whispered about legislation that would block their own president from acting.

“We are still trying to work with POTUS to avoid that outcome,” a congressional source told AFP.

Even Trump’s most accommodating allies have begun to speak out against what amounts to a major break with Republican orthodoxy.

“There is a lot of concern among Republican senators that this could sort of metastasize into a larger trade war,” Senate majority leader Mitch McConnell told reporters.

“Many of our members are discussing with the administration just how broad, how sweeping this might be,” he added. “There’s a high level of concern about interfering with what appears to be an economy that’s taking off in every respect.”

Sarah Sanders also tried to soothe unease at Cohn’s departure, saying a decision on his replacement would come soon.

“The president’s got a number of people that could potentially fill that role,” she said.

“What I can assure you obviously is he’s going to make a good pick that can help him continue to further building a strong economy and continue creating jobs and continue focusing on long-term economic success.”

Despite Republican agitation, it is far from clear what the final tariffs will look like.

Cohn, a 57-year-old former Goldman Sachs executive, had lobbied passionately against the tariffs before losing out.

Data released Wednesday showed US foreign trade deficit widened in January to its highest level in nine years, heaping pressure on Trump, who had campaigned on a promise to reverse that trend.

Trump took to Twitter to blame the deficit on “bad policies & leadership” from his White House predecessors.

“China has been asked to develop a plan for the year of a One Billion Dollar reduction in their massive Trade Deficit with the United States,” he tweeted.

China has been asked to develop a plan for the year of a One Billion Dollar reduction in their massive Trade Deficit with the United States. Our relationship with China has been a very good one, and we look forward to seeing what ideas they come back with. We must act soon!

“Our relationship with China has been a very good one, and we look forward to seeing what ideas they come back with. We must act soon!”

There could be stormier waters ahead, with a pending administration report on intellectual property theft expected to hammer China and possibly provoke further tariffs.