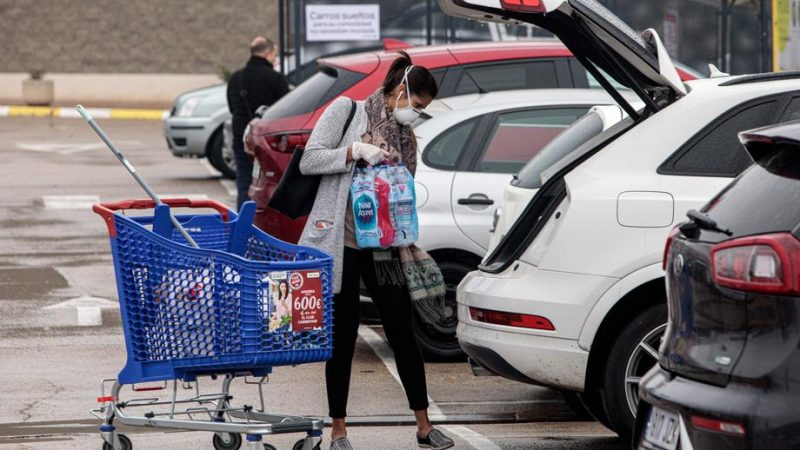 A woman protected with a mask and gloves puts groceries in the trunk of her car, parked outside a supermarket in the town of Paterna, eastern Spain, 17 March 2020. [EPA-EFE/BIEL ALINO]

Europeans have been living with euro banknotes and coins for 20 years now, but many still point the finger at the single currency for covertly driving up consumer prices — despite plenty of evidence to the contrary.

“The euro is a catastrophe, it’s catastrophic,” says Maria Napolitano, a 65-year-old Italian living in Frankfurt.

“With 100 deutschmarks, you could fill up your shopping trolley. Now, 100 euros aren’t enough to fill two bags.”

A deutschmark is roughly 50 eurocents.

It’s an impression that is shared by many across the eurozone, from Paris to Rome, Madrid to Athens.

Victor Irun, a 53-year-old teacher in Madrid, said that for Spaniards the switch to the euro was “like entering a club for rich people while not wearing the right clothes.

“You had the impression we weren’t yet ready,” he told AFP. “It was as if we were living in Spain, but paying with French or Dutch money.”

Some Germans even coined a new nickname for the single currency — “teuro”, a pun on the German word for expensive, “teuer”.

In a 2006 study, university professor Hans Wolfgang Brachinger compiled an index of “perceived” inflation among Germans, which measured a “felt” increase in consumer prices of seven percent between 2001 and 2002, compared with around two percent normally.

In reality, however, official statistics showed no pick-up in inflation in Europe’s biggest economy.

“There was a very strong feeling in several countries that prices had gone up, and yet we had official stats telling us otherwise,” said Giovanni Mastrobuoni, an economics professor at the University of Turin.

In a detailed study on the issue, he tracked the prices of different everyday goods in the eurozone — from fruit, vegetables and bread, to beverages and restaurant meals — and found that the prices of some inexpensive products really did increase as a result of the switch to the euro.

And as retailers tended to round up rather than down when converting the price into the single currency, it was hardly surprising that people noticed — and felt cheated.

“The things that you consume very often, food, coffee, things that don’t cost that much. Over time, they would shape your perceptions because these are the most frequent transactions,” Mastrobuoni said.

In France, the average price of a simple coffee in a bar rose from €1.19 euros to €1.22 between the end of 2001 and the beginning of 2002, according to the national statistics office, Insee.

According to Mastrobuoni, the phenomenon is even more marked in countries where distribution sectors are less concentrated, as small retailers there are at greater liberty to raise their prices.

The European Commission calculates that the actual increase linked to the introduction of the euro was between 0.1 and 0.3%.

However, headline inflation was largely unaffected because the prices of higher-end goods did not increase and, in some cases, even declined thanks to improved productivity.

For all 12 of the countries that adopted the euro from the very beginning, the average annual rate of inflation stood at 2.3% in both 2001 and 2002, according to the EU’s Eurostat statistics agency.

However, the picture varied from country to country.

In Spain, inflation stood at 2.8% in 2001 and 3.6% in 2002, while most other countries recorded constant inflation or, in the case of Belgium, Germany, Luxembourg and the Netherlands, slower inflation.

Pierre Jaillet, a researcher at both the Jacques Delors and Iris institutes in France, said that consumers’ profiles played a significant role in whether they felt a discrepancy between real and perceived price developments.

People who are less well-off tend to spend a greater proportion of their income on food, so they will be squeezed more, he argued, noting that consumers generally remembered price increases, but not price reductions.