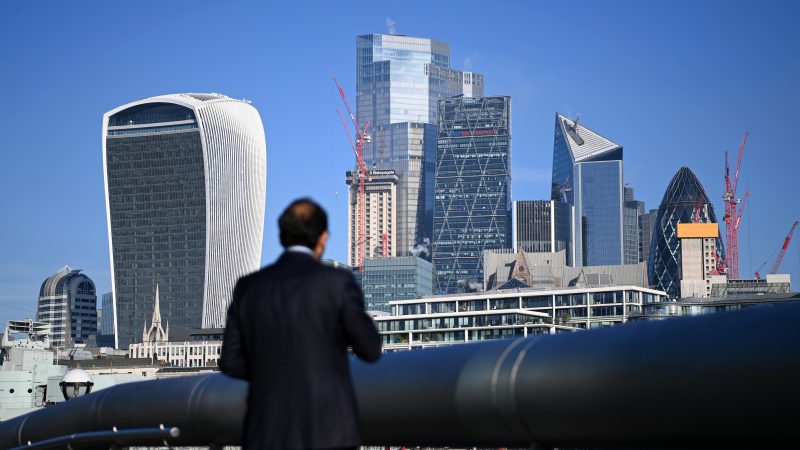 British financial services exports have struggled to recover from the twin hits of COVID-19 and Brexit and are lingering at levels last seen in 2006 when adjusted for inflation, new data showed on Thursday (27 January).

Britain exported 14.5 billion pounds of financial services in the third quarter of last year, according to new inflation-adjusted figures from the Office for National Statistics.

While up slightly from 14.1 billion pounds in the second quarter, which had been the lowest reading in 15 years, the data pointed to tough times for exporters of financial services.

Exports of financial services to the European Union totalled 5.1 billion pounds in current prices in the third quarter, just ahead of exports of 4.4 billion pounds to the United States.

In 2019 – when financial services trade with the EU was still unrestricted – quarterly exports to the EU were around 1 billion pounds higher.

“Financial services exports to EU are down around 10% compared to non-EU exports since 2019, but at least part of the fall is probably due to COVID-19 rather than Brexit,” Thomas Sampson, associate professor from the London School of Economics, said about the data on Twitter.

He said the data for services trade overall – excluding travel and tourism hit by the pandemic – suggested Britain’s deal with the EU had reduced flows in the first three quarters of 2021 overall, although mostly because of lower imports.

Financial services, which have been touted by ministers as key to Britain’s post-Brexit future, are the country’s largest single services export.

Other sectors are faring much better. Exports of “other business services” – which include consultancy, outsourcing, legal advice and architecture – had almost recovered to peak levels even adjusting for inflation, at 29.2 billion pounds in the third quarter.

Britain’s financial services exports hit an inflation-adjusted record high of 21.6 billion pounds in the fourth quarter of 2007, shortly before the financial crisis.

The most recent peak, 17.8 billion pounds in the second quarter of 2016, came just before the vote to leave the EU.

Following Brexit, the financial sector has found it harder to trade with the EU, which had been its biggest export customer by a wide margin.

Some banking, insurance and other financial activities undertaken for customers in the EU that had previously been done from London must now be conducted inside the bloc, with taxes paid locally.

Although surveys show London remains in the top two global financial centres with New York, financial sector officials are looking to authorities to help boost the city’s global attraction, given that EU financial centres such as Amsterdam present new competition to London.

“That means delivering on the government’s regulatory reform agenda, whilst, of course, maintaining high regulatory standards and a sound legal system – essential also to the industry’s success.”