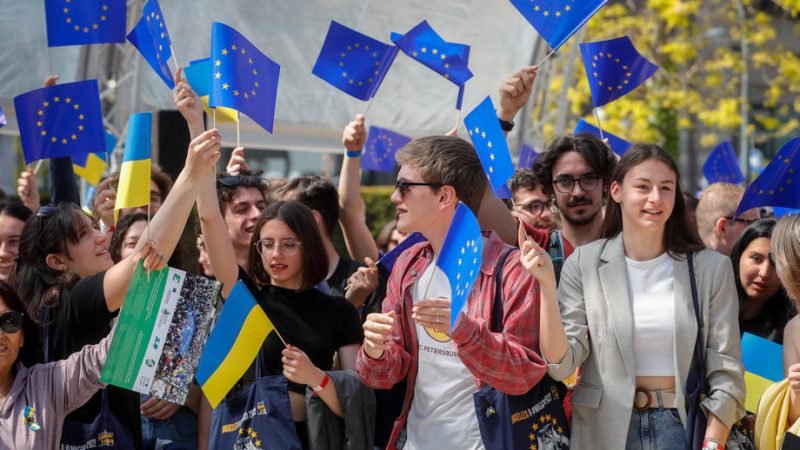 Since the start of the war in Ukraine, the EU has allocated funds and resources to support Ukrainian students and staff on mobility. [EPA-EFE/STEPHANIE LECOCQ]

Universities across the EU are supporting Ukrainian students through mobility partnerships. Meanwhile, academics warn that reconstruction efforts will be key to avoid the risk of brain-drain and rebuild a country able to attract talents.

Following Russia’s invasion of Ukraine, the EU has mobilised funds and adapted Erasmus+, the EU study and work away programme, to support Ukrainian students in the country and abroad.

“The idea is that through this incoming mobility, universities can support the students or the staff that have fled in the past few months and in a way support their safety,” said Nicoleta Popa, projects coordinator at the ANPCDEFP agency managing Erasmus+ programmes in Romania.

According to a study by the European Parliament Research Service, around 480 Ukrainian students are currently engaged in Erasmus+ activities.

Student mobility from Ukraine has grown significantly after the 2014 Crimean conflict. 78,000 Ukrainian students went abroad in 2019, with over 60% of them taking part in activities in European universities.

One of these partnerships is carried out by the University of Strasbourg, which established an Erasmus Mundus Joint Master programme (EMJM) in Chemoinformatics in collaboration with seven universities, including the Taras Shevchenko National University of Kyiv in Ukraine.

“Ukraine has become a very important partner,” professor Alexandre Varnek, director of the Chemoinformatics master in Strasbourg, told EURACTIV, adding that relations with the Ukrainian university started in the early 2000s.

The programme, which allows students to spend one year in one of the partner universities, has now been affected by the war, putting an end to the partnership with a Russian university and impacting mobilities towards Ukraine.

“The problem is that we cannot send these foreigners to Kyiv now, but I expect that in 2023 we will be able to work normally,” assistant professor Gilles Marcou told EURACTIV.

The programme has been adjusted so that the other partner universities can host a higher number of students, including Ukrainians.

“Certainly this is a very small contribution compared to the entire help which Europe can provide,” Varnek said.

Yet, “this could be actually important” so that the country is not isolated while the war continues, he added.

Moreover, these exchanges could also help in the longer term.

“These specialists are required in the country, because there are some industrial companies where methods of cheminformatics are widely used in their practice,” Varnek explained.

However, the conflict could also trigger a brain-drain, with many students deciding to permanently move abroad.

A June survey conducted by the Erasmus Student Network (ESN) on 528 Ukrainian students found that 41% of respondents will not keep studying in Ukraine, while 37% have not yet decided where to continue their studies.

In a statement released in March, a group of European universities, the ESN, the European Students’ Union and the European University Foundation called on the EU to “consider the brain-drain risk” due to the war.

Beside emergency support, the group stressed the importance of helping Ukrainians “smoothly transit back to their alma maters if and when circumstances allow,” as “young people and a robust academic community are critical for rebuilding countries after the war”.

Reconstruction efforts will play a key role in attracting talents back to Ukraine, according to Marcou.