European Commissioner for Trade Cecilia Malmstrom speaks at a media conference in Brussels on 18 September 2018 on modernisation of the World Trade Organisation. [EPA-EFE/OLIVIER HOSLET]

The European Union and the United States are still in exploratory talks about how they can pursue a limited trade agreement, with no real negotiations yet started, EU Trade Commissioner Cecilia Malmstrom said on Monday (24 September).

Malmstrom told reporters on the sidelines of the United Nations General Assembly that the two sides are looking at facilitating sales of U.S. liquefied natural gas to Europe and reducing regulatory barriers to trade.

“We’re still in that exploratory phase. We haven’t started any negotiations yet. People are talking to each other and we will have a new meeting in November,” Malmstrom said.

As part of an effort to modernise the WTO, the European Commission proposed last week sanctions on countries that commit “willful and repeated” obfuscation of their trade policies. 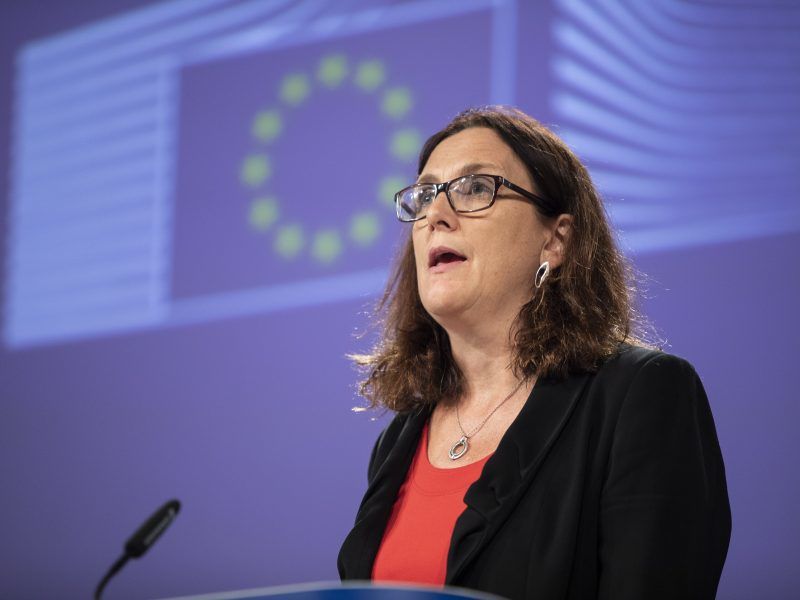 Malmstrom said on Monday the three ministers will discuss possible reforms aimed at reducing industrial subsidies, where China and other countries “are massively subsidising state-owned enterprise and thereby creating imbalances in the global market.”

“We are also talking about issues related to forced technology transfers, for instance, where we think we need new rules,” she added.

The United States is pursuing tariffs on hundreds of billions of dollars’ worth of Chinese imports based partly on its accusations that China’s policies unfairly force U.S. companies to transfer technology to their Chinese partners.

In an effort to appease Washington, the EU said in August it was willing to reach a “reciprocal” agreement with the US to scrap car tariffs as part of a new deal, but Malmstrom immediately warned there were still “profound disagreements” on trade.

US President Donald Trump and Commission chief Jean-Claude Juncker reached an agreement in July in the White House to open trade talks to address outstanding differences and to scope areas to reduce the duties.