Speaking at the BusinessEurope summit, von der Leyen recalled that she had a good meeting with Trump during the Davos forum in January

After that meeting, she said an agreement could be reached “in a few weeks’ time” to improve the bilateral relationship, while the threat of new US tariffs on European exporters is still hanging.

“There might be momentum toward improving our relations on a positive footing,” von der Leyen said on Thursday.

The offer would improve the bilateral cooperation on trade, energy and technology. But the details of the package and when she intends to travel to Washington to discuss it with Trump remain unclear.

As a result, the package is expected to propose scrapping tariffs for industrial goods and ease some regulatory burdens, including the conformity assessment procedure that some goods have to pass.

One of the most controversial issues continues to be the inclusion of agriculture in the trade negotiations.

Washington wants to reduce its €12 billion deficit in agricultural trade exchange, but European partners excluded this chapter from the mandate last year.

One of the issues raised was the possibility of lifting some regulatory barriers (sanitary and phytosanitary measures-SPS) to facilitate the export of some agricultural products.

But the European Commission and member states said that they would not include in this review controversial products such as chlorinated chicken or hormone-treated beef, Trade Commissioner Phil Hogan told reporters in February. 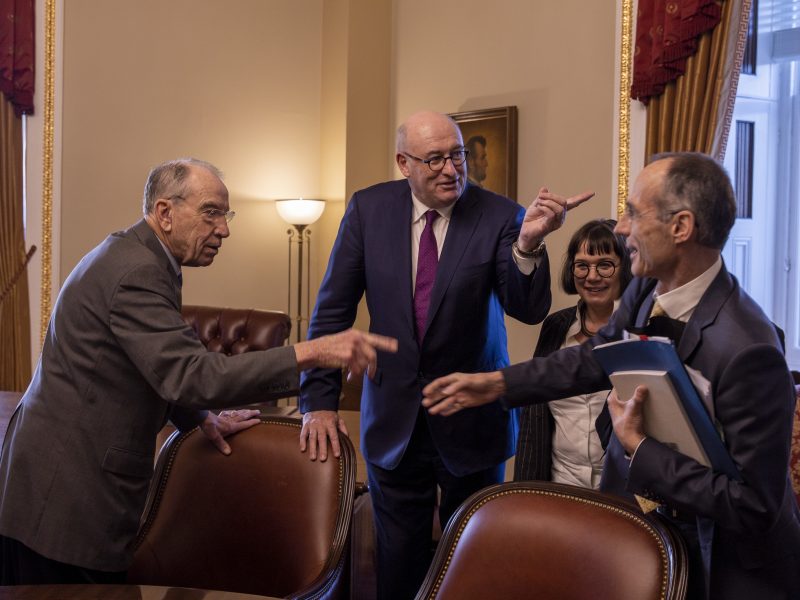 European Trade Commissioner Phil Hogan returned to Washington on Thursday (6 Febrero) for talks with US counterpart Robert Lighthizer designed to improve transatlantic ties as the threat of auto tariffs looms.

Hogan will travel to the US for the third time since January to deliver a speech on WTO reform – a top priority for the EU – at Georgetown University on 17 March. The following day he will travel to Ottawa (Canada), to participate in a meeting of the Ottawa Group, which brings together13 like-minded WTO members.

EU sources said there no meeting was scheduled at this stage with the US administration, although they were ready to consider it if the opportunity came up.

Hogan had said that there was a “window of opportunity” to reach an agreement with the US by 18 March, the date when higher tariffs on European aircraft products will increase from 10% to 15% in the context of the Airbus case.

Europeans interpreted as a positive sign the fact that Washington did not yet slap higher tariffs on agrifood goods, as they could have done in response to the EU subsidies given to Airbus.

But despite the mild optimism on the European side, the mini-trade package is unlikely to be finalised in time for Hogan’s visit to the US, EU sources said.

Hogan’s chief of staff, Peter Powell, said on Wednesday that “the work is not easy, but there is real commitment on both sides.”

“There is no silver bullet, there is no low-hanging fruit. The work is slow, detailed, granular and covering a diverse range of issues”.

Power warned that the upcoming US elections in November, the spread of the coronavirus and the volatility of the stock market are all threats to the transatlantic talks.