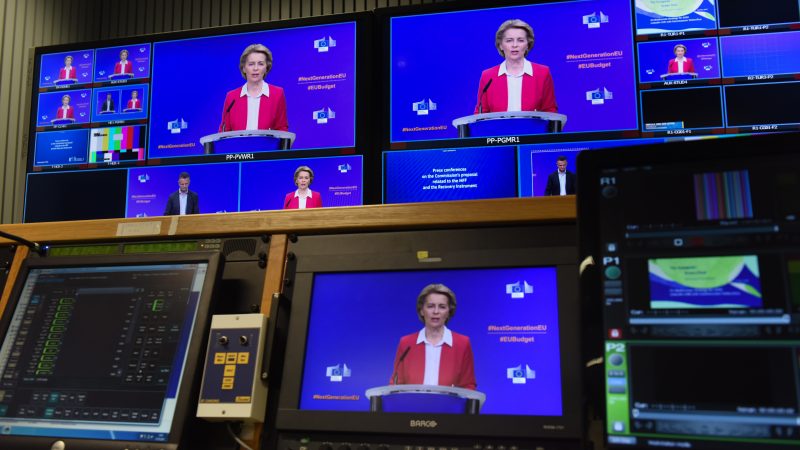 As part of its recovery plan, the European Commission wants to attract €600 billion of additional private investments in order to finance strategic sectors and support viable companies at risk of liquidity shortages in the aftermath of the COVID-19 crisis.

The former German minister proposed that EU member states provide guarantees allowing the Commission to borrow €750 billion on the markets to finance her recovery fund, named “Next Generation EU”.

But von der Leyen also wants the private sector to play a bigger role in the recovery, in order to fill the investment gap.

“Next Generation EU will help those perfectly healthy companies that have made the right decisions and investments over decades – but that find themselves at risk now because competitors in other member states have better access to public or private money to get fresh capital,” she told the MEPs.

Her fund will also invest in key European industries and technologies “to make crucial supply chains more resilient.” And it will finance cutting-edge technologies, such as artificial intelligence, precision farming or green engineering.

To that end, von der Leyen proposed to create two new instruments to support solvent firms and to invest in strategic sectors. In addition, she will reinforce InvestEU, formerly known as the ‘Juncker Plan’, the instrument to attract private capital through EU guarantees.

Von der Leyen proposed to set aside around €60 billion of the €750 billion to extend guarantees. By doing this, the Commission expects to attract an additional volume of €600 billion in private investments.

The bulk of the money will be channelled through the new ‘solvency support instrument’ that the Commission wants to set up this year.

By using €31 billion as guarantees, the EU executive expects to attract €300 billion to support viable firms in trouble by offering investors covering the first potential loses, an EU official explained.

The guarantees will be managed by the European Investment Bank, and will support mainly companies in the regions and sectors most affected by the pandemic.

There won’t be a preallocation key per country, but there will be guidelines to ensure that the investments are aligned with EU priorities. For example, at least 25% of the investment must go to the ‘green’ transition.

With this instrument, the Commission hopes to minimise the risk of fragmentation of the internal market, given that some countries like Germany have more financial firepower to help their companies. More than half of the state aid approved by the Commission to date has come from Berlin.

In addition, the Commission proposed a new ‘strategic investment facility’ to unlock €150 billion of investments by using €15 billion as guarantees.

These guarantees, also managed by the EIB through InvestEU, will boost the resilience of strategic sectors, especially those linked to the green and digital transition. They will also support key value chains in the internal market, such as medical equipment and pharmaceutical products.

Alongside these two new instruments, the Commission also plans to strengthen the InvestEU instrument by adding € 15.3 billion in guarantees. Using the same leverage ratio applied to the other guarantee-based mechanisms, this could attract around €150 billion in private investment.

The private investment unlocked by this mechanism could boost the EU’s GDP by 2.3% in 2024, compared with the baseline scenario, according to a Commission staff working document accompanying the recovery fund proposal.

The EU executive also hopes that, thanks to the new guarantee system, the investment mobilised could be 1% higher than the baseline scenario.