European Commissioner for Internal Market and Services, Thierry Breton give a press conference on a new strategy on Europe?s Digital Future at European Commission in Brussels, Belgium, 19 February 2020. [EPA-EFE/OLIVIER HOSLET]

The Commission proposed on Wednesday (27 May) an unprecedented stimulus of €750 billion to overcome the COVID-19 crisis.

In order to finance the record figure that it plans to borrow from the markets, the EU executive will not ask for more contributions from the member states, as it would have been a dead-end in the middle of a recession, and given the already immense stimulus.

Instead, the Commission proposed various taxes to cover payments over the next three decades, linked “in a positive way” to the EU’s digital and ‘Green’ priorities, Commissioner  for Budget, Johannes Hahn, told a group of European media including EURACTIV.

Member states face tough negotiations ahead as they will try to agree on issuing an unprecedented level of EU debt, the injection of an additional half a trillion euros in grants to the EU budget, and arguably the most important own resources transformation in decades.

The Commission could raise around €50 billion annually with half a dozen new EU taxes, including a carbon tax, a levy on single-use plastics, the extension of the Emission Trading System or the European digital tax.

One of the eye-catching proposals is a new tax on multinationals. According to Hahn, it would cover companies with global revenues of €750 million or more which operate on the single market, and it could raise €10 billion annually.

The details are still very vague. “There are only ideas floating around,” Hahn told reporters.

But the Austrian Commissioner already shared the reasons why big companies in Europe should contribute “a little bit”, given the benefits they obtain from the internal market.

These firms have “a much bigger customer base, a seamless supply chain, in many countries the same currency and a uniform regulation”, he explained.

Companies save costs by simply using the single market, he added. Therefore, getting a “modest levy for this access is something we consider as a fair deal”.

Hann said the discussions had only started but he had already tasked his team with designing this levy, as part of a broad menu of new own resources proposed to the member states to finance the recovery fund.

‘Imagination has no limits’

The proposal, however, met with a lukewarm reception in other corners of the Commission.

Asked about the ‘single market tax’, Breton, who oversees the internal market, recommended being “very cautious” about the own resources created to repay the EU debt.

“Imagination has no limits”, Breton told EURACTIV in an interview. 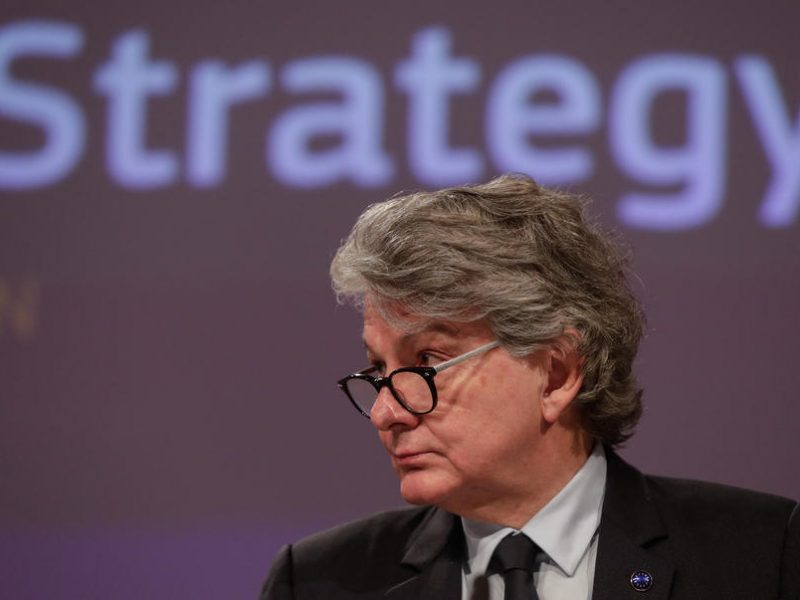 Commissioner for Internal Market, Thierry Breton, told EURACTIV.com in an interview that Europe could have been better prepared to face the COVID-19 if China and the World Health Organisation had offered “better and more reliable information earlier”.

The French Commissioner, who had once been a finance minister, said that he was “extremely, extremely cautious by experience”.

Therefore, he recommended being very cautious in picking up the appropriate ones to finance the stimulus.

In that regard, he listed the ideas already in the pipeline, including a European digital tax, if talks in the OECD, which groups the world’s industrialised nations, fail to reach an agreement, a carbon adjustment mechanism, or expanding the Emission Trading System to cover maritime and aviation sectors.

The European Commission is considering bringing back Europe-wide plans for a digital services tax in order to finance the bloc’s €750 billion recovery fund, the executive said on Wednesday (27 May).

Being “realistic”, Commissioner Hahn hoped for an agreement on the principles of the package in the next few months, and a final decision on the specific proposals for the new own resources by the end of the next multi-annual financial framework (2021-2027).

But he stressed that “what is important is that, at the latest, by the end of 2027, we can already rely on very concrete revenues from these new own resources, in order to start repaying from the beginning of 2028”.

The Commission has planned a reimbursement period of 30 years until 2058.