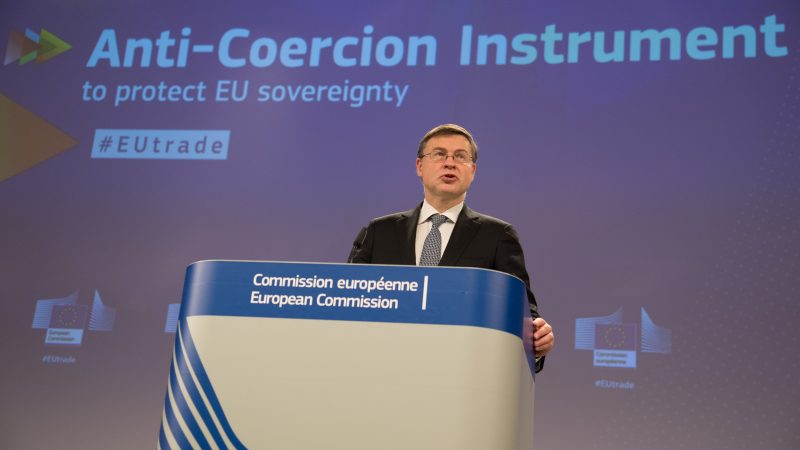 The European Commission proposed a powerful new trade instrument on Wednesday (8 December) that would give it more leeway to impose sanctions on third countries.

The EU has in recent years increasingly found itself facing threats from economic rivals such as China making threats against French wine sellers and German carmakers, or Washington imposing tariffs on European steel and aluminium.

“With this proposal, we are sending a clear message that the EU will stand firm in defending its interests,” EU trade boss Valdis Dombrovskis said in Brussels.

The new instrument lays out a process by which the Commission can take countermeasures if the EU or a member state is suffering from ‘coercive measures’ by third countries such as China, or even the US.

“The main aim of the anti-coercion tool is to act as a deterrent,” Dombrovskis said. If third countries saw that the EU would take countermeasures, they might not start any coercion attempts in the first place, the reasoning went.

The EU executive, however, did not define the coercive measures that might warrant an EU reaction.

The list of possible countermeasures Brussels could take under the proposed regulation is long and could include suspending preferential tariffs, restricting access to public procurement or the possibility to invest. Moreover, the EU’s countermeasures can target individuals, companies and/or third countries.

According to an EU official, the triggers for the application of the instrument are not linked to the form of the measures but to the intent to coerce the EU or a member state.

The Chair of the European Parliament’s trade committee, Bernd Lange, said the proposal would help the EU defend its interests.

“We now need to establish a comprehensive approach to what constitutes coercive behaviour and how the EU should respond to these aggressive acts. From investment restrictions to sanctions of intellectual property rights, we need a full toolbox. A rules-based multilateral trading order remains our priority, but we will not allow others to dictate decisions to us,” he said.

Dombrovskis gave as an example the coercion efforts the Chinese government has taken against Lithuania in the past few days, over Vilnius’ diplomatic support for Taiwan.

Earlier this week, Lithuanian Foreign Minister Gabrielius Landsbergis had sent a letter to Dombrovskis and the EU’s chief diplomat Josep Borrell, asking the EU to intervene on the country’s behalf and saying it was high time to finalise the anti-coercion mechanism.

“It is hard not to see that these recent measures by the People’s Republic of China are a continuation of the politically motivated economic coercion that Lithuania has been facing since August 2021,” Landsbergis wrote in the letter seen by EURACTIV.

“These activities by the PRC authorities against one EU member state have a direct impact on the entire EU and our common trade policy,” he added.

Dombrovskis said Lithuania’s case “could clearly be a reason to carry out an assessment to determine if there is economic coercion”.

Niclas Frederic Poitiers, a research fellow at the Brussels-based Bruegel think tank, said the multilateral trade system “has not managed to adapt to the current challenges in global trade”.

“In particular, the US has engaged in a number of trade policies in clear violation of WTO rules while China is using its economic clout to pressure smaller economies like Australia and recently Lithuania”.

And even if the World Trade Organisation were fully functional, it would not be suited to react to the rapidly evolving trade disputes the anti-coercion tool seeks to address, Poitiers said.

According to trade lawyer Charlotte Sieber-Gasser, however, a dispute like the one between China and Lithuania would take years to come to a conclusion in a WTO setting.

One of the future sticking points around the proposal, however, lies in the fact that the Commission argues the tool belongs to the realm of trade policy instead of foreign policy, which allows the regulation to be passed by a qualified majority of governments, circumventing the usual unanimity requirement.

“The instrument seems well suited as it avoids the problem of the unanimity of EU foreign policy and thus has better a chance of working as a more credible deterrent,” argued Poitiers.

“Whether it will work effectively as a deterrent will depend on how willing the EU will be to react forcefully to challenges by other major economies like China or the US,” he told EURACTIV.

Some member states, including Sweden, the Czech Republic, the Nordics, and Ireland warned in a recent non-paper the instrument should not lead to more protectionism.

Over to the French

“The litmus test for the new instrument will be when there is another incident like the Lithuanian one,” an EU diplomat told EURACTIV, adding that member states still have too few details about how the mechanism is supposed to work to question its use.

The proposal will now be discussed by the European Parliament and by member state governments in the EU Council.

The French government, which will be chairing the EU Council presidency in the first half of 2022, welcomed the proposal.

“We are determined to take this proposal forward during the French Presidency of the Council. It is time for the EU to have the means to assert its sovereignty when its interests are challenged by foreign powers”, said French Trade Minister Franck Riester.