WTO ministerial meeting fizzles out as no deal on trade reached 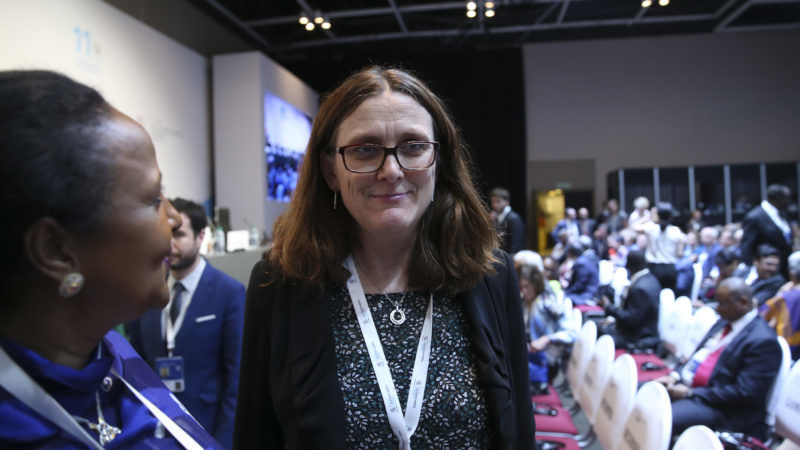 The World Trade Organisation concluded a ministerial meeting Wednesday (13 December) with nothing significant to boast – a meagre outcome for its first gathering in the Donald Trump era.

Trump is outspokenly hostile to multilateral trade accords, and his top delegate here launched a broadside at the WTO, accusing it of losing its focus on trade negotiation and becoming a “litigation-centered” body.

The three day meeting ended with no significant deal on promoting global trade.

Campaigners from Global Justice Now cheered the collapse of the WTO ministerial  and said it was “the best outcome possible” given the position of rich countries at this week’s summit. They criticised the continued intransience of rich countries like Britain who have “no interest in solving the fundamental injustice of current WTO rules, and instead want to turn the whole world into a corporate playground.”

On the sidelines, the European Union and the South American trading bloc known as Mercosur did however announce they were close to concluding a free trade accord under negotiation since the 1990s. It might be ready early next year, they said.

But the broader WTO gathering was seen as a dud.

“We are disappointed. Despite our efforts, members failed to reach any significant agreements,” said WTO Director-General Roberto Azevedo.

He took a jab at what he called the US delegation’s inflexibility, saying “multilateralism does not mean getting what you want, but rather that which is possible.”

As has been the case for years, bilateral deals took precedence over multilateral accords, which are hard to achieve because they require consensus within the WTO.

A fisheries agreement had shaped up as a possible major accord at this meeting, but it was blocked by India, according to an NGO called Bloom.

“Buenos Aires should serve as a wakeup call. The result is not satisfactory,” said France’s secretary for foreign trade, Jean-Baptiste Lemoyne.

The @WTO #MC11 Ministerial meeting was a lost opportunity. It failed to achieve any multilateral outcome. My statement to delegates, and more:https://t.co/tJ04bGlhzb

Trump has already withdrawn the United States from the Trans-Pacific Partnership (TPP) and insisted on renegotiating the North American Free Trade Agreement (NAFTA) with Mexico and Canada.

And on Monday, US Trade Representative Robert Lighthizer accused the WTO of losing its focus on trade negotiation.

“Too often members seem to believe they can gain concessions through lawsuits that they could never get at the negotiating table,” Lighthizer said.

He also criticized special treatment given to some countries because they are classified as developing nations.

Trump has long made the WTO a preferred target of its “America First” policy, threatening to pull Washington out of the trade organization it says is hampering its ability to compete.

Lighthizer did not even stay for the end of the WTO conference, leaving a day early.

Copa and Cogeca were disappointed that no major progress was made in the 11th Ministerial conference on the Doha round of world trade talks.

“We are committed to the world trade system and the Doha round of WTO trade talks as they represent a good opportunity for us to ensure fair trading rules for the agricultural sector,” explained Pekka Pesonen, Secretary General.  “The EU has made important steps in the talks but we regret that other trade partners are not willing to show the same level of commitment. Although some positive developments were seen in areas such as fisheries and e-commerce, there was no agreement on public food stock holding. WTO negotiations must resume to ensure fair trade for all including farmers and their cooperatives,” concluded Pesonen.

Nick Dearden, director of Global Justice Now, said:  “WTO rules have been created to serve the interests of the big players in the global economy – transnational corporations. Their demands have ridden roughshod over the needs of the majority of people in the world. Yet rather than transforming these rules, the rich countries continue to bring more and more issues onto the WTO’s agenda which will make the situation even worse.

“India is seen as the bad guy by rich countries because it stands up for its right to feed its citizens at reasonable prices. This is good public policy and has nothing to do with trade. It is obscene that any international institution would prevent countries taking such action, least of all when that action is being called for by rich states who subsidise their own agriculture to the hilt.