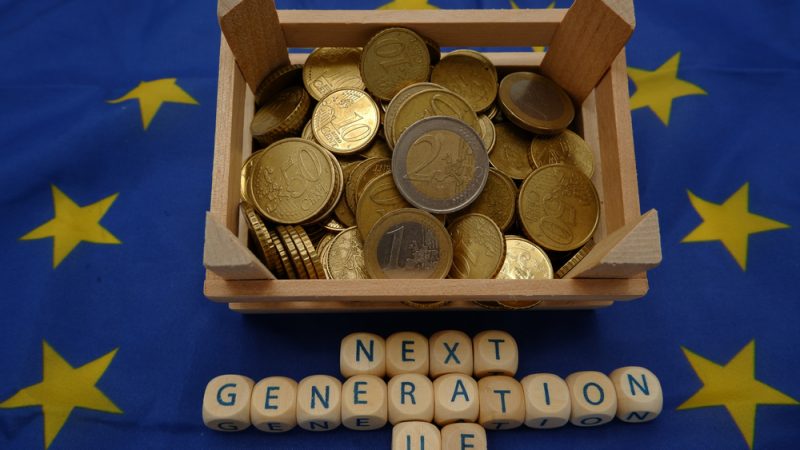 After a 5-day summit in July, another equally tense one in December, and tough negotiations with MEPs throughout, Europe will borrow an unprecedented 750 billion euros to propel itself into the future. With the European Parliament’s consent on the Union’s new 7-year budget secured, the total barely falls short of 2 trillion euros. [Shutterstock/EnzoVi]

Luis Garicano (Ciudadanos, Spain) and Martin Hojsík (Progresívne Slovensko, Slovakia) are EU lawmakers from the centrist Renew Europe Group of the European Parliament. Gergely Karácsony is the mayor of Budapest.

After a five-day summit in July, another equally tense one in December, and tough negotiations with MEPs throughout, Europe will borrow an unprecedented €750 billion to propel itself into the future. With the European Parliament’s consent on the Union’s new 7-year budget secured, the total barely falls short of €2 trillion.

These amounts are unparalleled; but so are the challenges that lay ahead. There can be no room for complacency, as troubling signs can already be seen from all corners of our Continent. The slow roll-out of the vaccines and surging infection rates threaten to plunge us into a protracted period of dismal economic performance.

Europe’s common recovery efforts too are suffering setbacks. Most national parliaments have yet to approve the authorization to borrow, Next Generation EU’s cornerstone, as well as the spending ceiling that paves the way for the Union’s new seven-year budget.

Not to mention a letter coming from the Baltic States explicitly threatening to delay this even further. There is no doubt that Europe will survive these momentary bouts of selfishness. What it cannot endure is to let yet another opportunity go to waste.

If our Union is to build a better future for its citizens, these common 750 billion euros must secure reforms and investments that last. To do that, we believe that it is a necessary pre-condition to garner the full acceptance of those they concern.

National plans must be rooted in the wishes of society – of all stakeholders, including civil society organisation, social partners and municipalities, and not only of those in power. This responsibility lies with European governments. They must guarantee meaningful public participation in the preparation and implementation of their recovery plans.

The Commission must ensure that this consultation process was properly conducted before approving the plans. This is not only reflected in the Regulation that establishes the Recovery and Resilience Facility but is also in line with the international commitments made through, most notably, the Aarhus Convention.

We count on the Commission to make sure governments comply with all their obligations.

Moreover, the fact that Next Generation EU would provide the necessary financing cannot override what is stipulated in national, European and international law concerning public consultation.

Some of the projects expected to be included in the national plans under the Recovery and Resilience Facility relate to renewable energy, wastewater treatment, tourism and transport.

Such projects may constitute plans and programmes requiring a strategic impact assessment. Governments cannot simply choose to ignore these obligations. The same goes for consulting society.

For Europe to secure a just recovery, citizens must be heard. The agreement reached in December between the European Parliament and the Council could not be clearer: national recovery plans must include “a summary of the consultation process (…) of local and regional authorities, social partners, civil society organisations, youth organizations, and other relevant stakeholders”.

Precisely because time is limited, there is no time to waste. European governments must kick-start the process now, opening a dialogue with companies, interested individuals and civil society.

Sadly, proper transparency and stakeholder consultation is absent in our countries. The Aarhus Convention and respective national laws are being ignored. Governments must stop with their PR stunts.

Instead of structured consultations involving the public, we can see orchestrated meetings and online conferences giving a mere illusion of involvement. Instead of full plans, only summaries are published.

Spending plans seem more dependent on election results than the actual needs of the people. How can anyone be surprised if the outcome only benefits those with friends in high places?

Member States cannot continue operating under a veil of darkness. To echo President Von der Leyen while presenting the Recovery Plan in May: “today, in this time of adversity and in response to the crisis, Europe, more than ever, needs unity, determination and ambition.”

The European Parliament stands ready to exercise its full rights of oversight. We will not waver when shedding light on the recovery plans that are not for the people because they are not by the people.