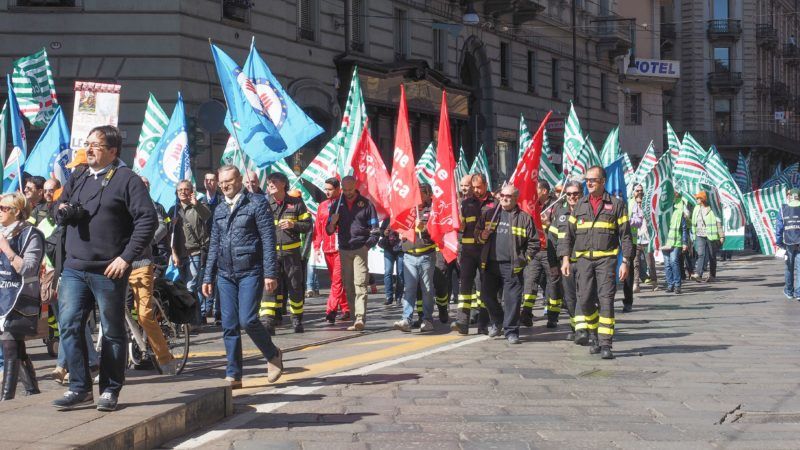 Protest march by major Italian trade unions on the occasion of an industrial action in Turin, Italy, on 4 May, 2016. [Claudio Divizia/Shutterstock]

On 17 November, EU leaders met with social partners in Gothenburg, Sweden, to discuss how to foster more and better jobs and growth in Europe. Karl-Petter Thorwaldsson, Eva Nordmark and Göran Arrius describe how the EU should now proceed.

This week, the European leaders will meet again in Brussels in the European Council to draw some conclusions from this important event.

We hope that this will be the conclusion of the European Council as well.

One of the highlights of the Gothenburg Social Summit was the proclamation of the European Pillar of Social Rights. The Pillar contains 20 fundamental principles to support the EU member states in developing well-functioning and inclusive labour markets and welfare systems.

The Pillar is not legally binding, which means it is now up to the member states to take responsibility for delivering better social conditions for citizens.

After a decade of economic crisis, the prospects for the European economy are finally looking better. But the repercussions of the crisis are still apparent. Inequalities between and within EU countries have increased, which hinders economic and social progress.

At the same time, labour markets are changing rapidly due to globalisation and digitalisation. These are challenges that all member states share.

The European Pillar of Social Rights can act as a guide for the member states in designing fairer and more inclusive national labour markets and social policies. This would in turn promote more sustainable growth, employment, competitiveness and social cohesion in all of Europe.

We welcome the Social Pillar. We especially welcome the emphasis on gender equality, life-long learning and the role of social dialogue. The Pillar does not transfer more powers over social issues from the national to the EU level.

The EU already has the possibility to lay down in law some minimum rights and protections for workers, e.g. on information and consultation as well as occupational health and safety. We support this EU competence.

EU legislation, however, needs to fully respect national collective agreement models, and member states must be able to maintain or introduce higher levels of protection for their workers.

Issues related to the labour market, education and social welfare primarily fall under national competence. The EU cannot and should not solve all problems. Therefore, it is important to be clear on where the responsibility for implementing the principles of the Social Pillar lies. A clear division of competences and a national ownership of the Pillar is key.

The role of the EU is mainly to support and promote the implementation of the Pillar, through co-financing, coordination, exchange of best practices, benchmarks and monitoring.

The decision by the European Commission to incorporate the “social scoreboard” into the European Semester is an important step and demonstrates that economic and social progress are two sides of the same coin. The Commission should also issue country-specific recommendations on the selected areas of the scoreboard, and Member states’ progress could be linked to the access to more EU funding.

Furthermore, we suggest the EU could support national policies related to the Pillar in the following ways:

• Support development of structures for social dialogue in member states. Social dialogue should be strengthened not only at EU level but also at national level. We therefore propose a new EU fund for building up and developing strong, independent and effective systems for social dialogue in EU countries in need. Countries that already have well-functioning systems, like Sweden, could contribute with knowledge and best practices. The European Commission should also appoint a Special Representative for social dialogue, nominated by the EU social partners, who could monitor the development of such systems in the member states concerned. Moreover, the Commission should introduce a new indicator in the social scoreboard, i.e. in the European Semester, relating to the institutional conditions at national level for industrial relations.

• Invest in national transition support systems. When old jobs disappear and new ones are created, EU member states need well-functioning transition support systems, both for up-skilling and re-skilling of the workforce. This is, not least, important in the limelight of digitalisation and the fourth industrial revolution. The EU should create a fund for co-financing the development of structures for such systems at national level.

The Gothenburg Social Summit was an important milestone in the debate on the future of the European Union. We would like to see an EU cooperation – united by common goals strengthened by cultural diversity – promoting both economic and social progress for its member states and citizens.

We therefore hope that the European Council recognises Gothenburg as the starting point for a more socially sustainable and inclusive Europe.