Before considering new debt, Europe should make full use of its common debt 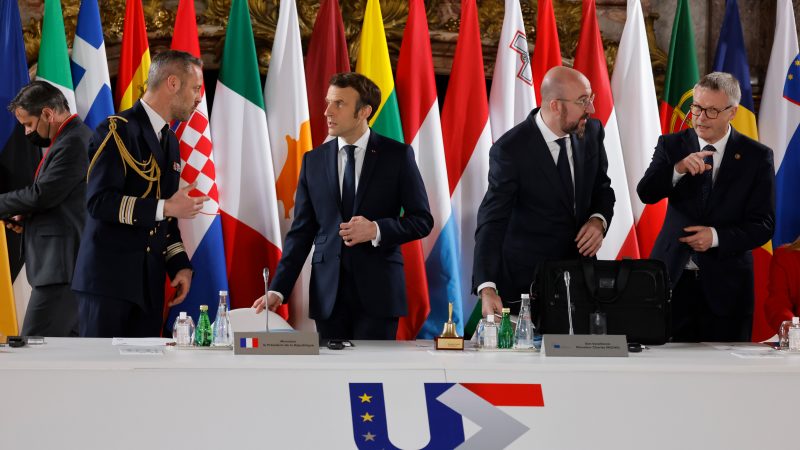 EU leaders meet at a summit to discuss the fallout of Russia's invasion in Ukraine, at the Palace of Versailles, near Paris, 10 March 2022. [EPA-EFE/LUDOVIC MARIN / POOL]

Rather than issuing new debt to deal with the economic consequences of the war in Ukraine and to build a “European defence,” the EU should transform the residual loans of the Recovery and Resilience Facility into immediate transfers and grants to member states, argues Jérôme Creel.

Dominated by the Ukraine crisis, the informal summit of EU heads of state and governments meeting this week in Versailles is likely to see tough discussions on the implementation of a new common debt issue that would operate in a similar way to the Recovery and Resilience Facility (RRF) of the Next Generation EU (NGEU) programme. This programme was developed to deal with the medium- and long-term consequences of the Covid-19 crisis.

The idea that will probably be discussed in Versailles is to provide EU member states with additional means to deal with the economic consequences of the war in Ukraine – energy, anyone? – and to build a “European defence.”

Beyond the tensions of certain northern European countries over the systematic use of public debt to combat all the ills affecting the European Union, it is perhaps useful to recall two things:

On the one hand, the activation of the Recovery and Resilience Facility is underway and we will have to wait a little longer to know whether it has achieved its objectives. The economic effects estimated ex ante are generally positive, all the more so as the funds allocated will be directed to the Member States most affected by the pandemic (Italy and Spain).

Transfers are a form of free money at least in the short-term for those who receive them: repayment will be late and shared between all Member States, so recipients will only repay a fraction of what they receive.

The loans imply paying immediate interest charges, albeit at a lower rate than the national rate if the borrowing country has a positive interest rate differential compared to the best borrowing conditions in the European Union.

So rather than considering renewing the NGEU programme – already – by adapting it to new challenges, would it not be possible for the EU to transform the residual loans of the Recovery and Resilience Facility into immediate transfers and grants to Member States?

The facility exists. It has not yet proved its worth, but Europeans have agreed that it should be implemented. Let’s give it every chance to be effective by using it fully and very quickly: there is no shortage of projects to finance!