By amfori and UN Women | amfori 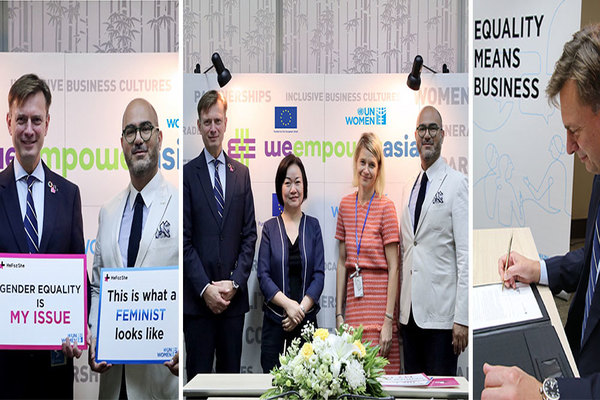 Globally, progress on women’s access to paid work has ground to a halt over the past 20 years. Less than two thirds of women aged 25-54 are in the labour force, compared to 93% of men. Today, women are still paid 16% less than men for the same job and only 1 in 4 managers are women.  Closing the gender gap in the workforce could add $28 trillion to the global GDP by 2025 (McKinsey, 2015). But the reasons for countries and businesses to close the gender gap go well beyond economic costs and benefits. Women make up half the world’s population. Equal access, opportunities and compensation are not women’s issues — they are basic human rights issues for everyone. The benefits of gender equality are not just for women and girls, but for everyone whose lives will be changed by a fairer world that leaves no one behind.

UN Women’s report “Women´s Rights in Review 25 years after Beijing”, which was just released, provides a comprehensive stock-take on the situation of women and girls today and progress achieved in the last 25 years. Featuring the latest global data, the report shows that there have been advances for women and girls. Overall, however, progress has been unacceptably slow.

Under the European Union-funded “WeEmpowerAsia” programme, amfori and UN Women are taking action to accelerate progress. Part of the “WE Empower” global movement, “WeEmpowerAsia” is a joint EU-UN Women initiative aiming to foster women’s economic empowerment by increasing the number of women who lead and participate in private-sector businesses in China, India, Indonesia, Malaysia, the Philippines, Thailand and Viet Nam, thereby advancing inclusive and sustainable growth and strengthening links between European and Asian markets through gender-sensitive trade and supply chains. “WeEmpowerAsia” also works with the private sector to implement the Women’s Empowerment Principles (WEPs), which amfori is proud to sign. The WEPs, which this year mark their 10th anniversary, are a set of seven principles offering guidance to businesses and industry associations on how to promote gender equality and women’s empowerment in the workplace, marketplace and community.  They are grounded in the recognition that businesses have a stake in, and a responsibility for, gender equality and women’s empowerment. Since the establishment of WEPs by UN Women and UN Global Compact in 2010, over 2,900 business leaders have adopted this global norm and framework.

The WEPs are central to amfori’s mission and will allow the association to leverage their new ambitious Gender Strategy 2020-2022, launched as a way to leverage its impact across supply chains to make steps towards closing the gender gap.

amfori’s mission is to enable each of its members to enhance human prosperity, use natural resources responsibly and drive open trade globally. Noting that women are also often disproportionately represented at the lowest tiers of supply chains and subject to the worst kinds of discrimination and abuses, amfori’s Gender Strategy supports women in the supply chains of the main sourcing countries of our member companies though the Women’s empowerment program. Launched in 2018, the programme helps businesses to empower women in supply chains   through trainings and workshops for managers and workers; research and advocacy on legislation and the development of guidance and tools.

Signing the WEPs now provides amfori with a new tool to address gender inequality in the entirety of our own and members’ operations and supply chains – i.e. from the C-Suite to the factory floor.

As a leading ethical trade business association with strong linkages with markets and supply chains in the European Union and Asia, amfori’s signing of the WEPs also represents an opportunity to help shape the global agenda on sustainable trade.

This year’s theme for International Women’s Day, 8 March, was, “I am Generation Equality: Realizing Women’s Rights”. On this Day, we celebrated women’s achievements, but we also called for more action. Inspired by the new European Union’s Gender Equality Strategy, that emphasizes the urgency to give a new impetus to gender equality, we call upon all partners to be part of “Generation Equality”!

amfori is the leading global business association for open and sustainable trade. Our vision is of a world where all trade delivers social, environmental and economic benefits for everyone.

UN Women is the United Nations organization dedicated to gender equality and the empowerment of women. A global champion for women and girls, the organization was established in 2010 to accelerate progress on women’s rights worldwide. UN Women’s efforts are based on the fundamental belief that every woman has the right to live a life free from violence, poverty, and discrimination, and that gender equality is a prerequisite to achieving global development.