Europe must reform its fiscal rules or risk disintegration 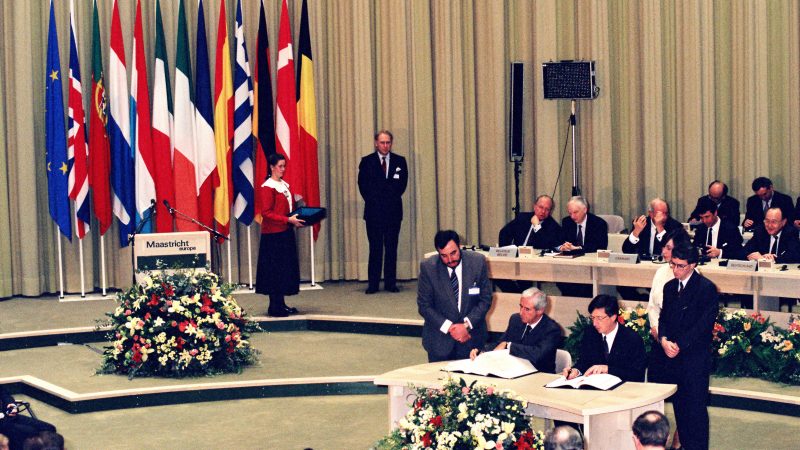 The Maastricht Treaty was signed 30 years ago, on 7 February, 1992. In the picture, Jacques Poos and Jean-Claude Juncker are signing the treaty on behalf of Luxembourg. [EC Audiovisual Service (Christian Lambiotte)]

Thirty years after the Maastricht Treaty was signed, the fiscal rules it imposed on EU member states are an outdated and counterproductive constraint, writes Benoît Lallemand.

Benoît Lallemand is the secretary general of Finance Watch, a European non-governmental organization that conducts research and advocacy on financial regulation.

Just before Christmas, Emmanuel Macron and Mario Draghi published a joint article in the Financial Times setting out the case for reform of the EU’s fiscal rules.

There was much in their analysis was correct. The two leaders pointed out that the current fiscal rules are “excessively complex”; they “constrained the actions of governments during crises” and “failed to provide incentives for prioritising key public spending.”

The rules are the product of their age. Thirty years ago this week, the Maastricht Treaty signalled a new era of economic integration for Europe’s 12 member states, with stability being the watchword.

This was very much in line with the Zeitgeist. At the time the treaty was signed, long-term sovereign interest rates were between 7-25% for the members of the Euro area, leading public debt servicing costs to become a significant part of public budget – between 3,5% and 11% of their GDP.

Right now, Eurozone long-term interest rates are at a historical low between 0% and 3%, with the European Commission itself projecting no change in this over the next decade. This has a pretty straightforward consequence: even with higher debt stock, servicing public debt has never cost so little to Euro area governments – 0-3% of Euro area countries’ GDP.

Given that fact, the 60% debt ratio – itself an arbitrary rule based on nothing more than the average debt ratio of EU member states at the time – appears for what it is: an outdated and counterproductive constraint.

Inflationary fears in 1992 were also considerably different, with Germany worried about the effect of reunification and the co-option of the high-cost, low productivity eastern economy. While inflation has been rising steadily in recent months, the ECB assessment is that this is a temporary blip in the graph, driven by covid-related supply side issues.

The past two years have seen the fiscal rules suspended and borrowing increased as member states scrambled to keep their economies afloat amidst the Covid-19 pandemic.

This borrowing was necessary, and – carried out at a time of record low interest rates – prudent. But as we emerge from the pandemic and into the end of the general escape clause that allowed for a pause of the rules, the calls for a return to “normal” rules will grow across the continent.

As early as September 2021, the eight most fiscally conservative members – Austria, Czech Republic, Slovakia, Netherlands, Latvia and the Scandinavian members – firmly planted their flag with a joint statement raising concern that the EU’s public debt ratio had gone from 79% of GDP in 2019 to a 94 % of GDP in 2021, and affirming their belief that “reducing excessive debt ratios has to remain a common goal”.

The potential for conflict is clear. The fiscal conservatives say that they are open for debate on the governance of the rules but they “do not consider the fiscal rules as an obstacle to efficient fiscal policy”.

But “efficient” fiscal policy is not an end in itself. Nor is it simply defined by arbitrary ratios.

The challenges faced by Europe in 2022 are very different to those it faced in 1992. Post-Merkel Europe faces some existential issues in the next decade: The recovery from the pandemic; the urgent need to build social infrastructure, to address climate change, and, relatedly, the heightened need for energy security so viscerally exposed by the crisis on the Ukrainian/Russian border.

Addressing these issues requires future-oriented spending that will put Europe on strong footing to face the next 30 years: investment is urgently needed for infrastructure investment, R&D, and a green industrial policy. Most importantly for the future of the Union, investment in a just transition that means that a new green economy does not leave the poorest behind.

Europe as an entity struggled to survive the post 2008 crash, with the strict imposition of the Maastricht criteria imposing needless hardship on citizens and feeding anti-Brussels sentiment across the continent.

To approach this latest crisis with the same out-dated, one-size fits all approach, forcing old-fashioned rules on a totally new era, would risk a fatal blow to European cohesion. For post-covid Europe, flexibility will be the key to durability.