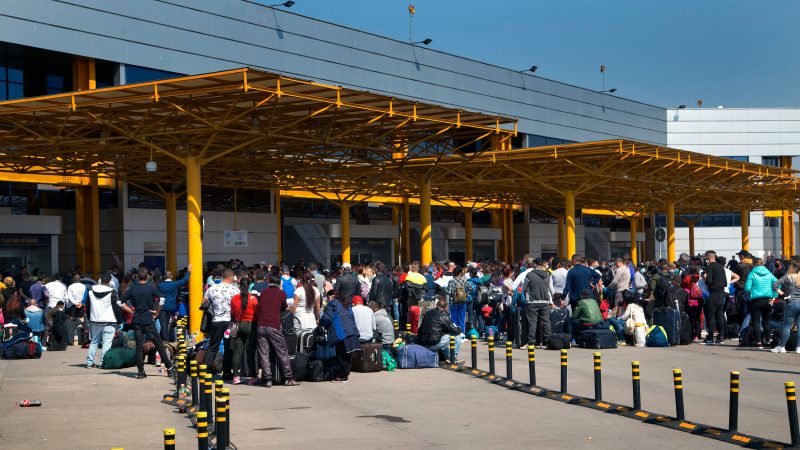 Seasonal workers from Romania prepare for their departure flight towards Germany at the International Airport in Cluj Napoca, 500 Km north-west from Bucharest, Romania, 9 April 2020. [Manases Sandor/EPA/EFE]

A truly integrated EU labour market cannot exist without a fair level of coordination for social security, writes Dragoș Pîslaru, who insists that Europe must learn the lessons of the COVID-19 crisis.

Dragoș Pîslaru MEP (Romania, Renew Europe) is the draftsperson for the Resolution on European protection of cross-border and seasonal workers in the context of the COVID-19 crisis.

On 11 April Nicolae Bahan, aged 57, was found dead in the living container he was sharing with other seasonal workers on a farm in Bad Krozingen in Baden-Württemberg, Germany. An autopsy later confirmed the cause of death as COVID-19.

Nicolae was one of the over 1.5 million European cross-border workers who work in another EU member state, in key economic sectors: agriculture, tourism, social and medical care, construction, HORECA or transport.

Even during the pandemic, when most of us were still in lockdown, tens of thousands of seasonal workers were being crammed in charter planes and flown to asparagus farms in Germany, to slaughterhouses in the Netherlands or to other places where labour shortage was critical.

Forced to sign contracts in German, Dutch, or other languages they don’t read, they ofen find out upon arrival that their working hours are longer, their salaries much smaller than promised and their living conditions abysmal, with housing and living with little protection against COVID-19.

This is not only an issue of workers from the East or South: in normal times, millions of EU citizens cross the borders of Luxembourg, France, Germany, Belgium, the Netherlands or Austria to work in neighbouring states.

All this has now ground to a halt. Who is covering their pensions? What happens if they do telework, would their work be eligible for social protection across the border? How about the self-employed acting as frontier workers?

The condition of the cross-border and seasonal workers is the topic of a resolution set to be adopted by the European Parliament during its plenary of 17-19 of June. Launched by Renew Europe, it received widespread approval.

The resolution covers a lot of policy areas – both for the protection of the mobile workers from the direct effects of COVID-19, but also from the numerous gaps in national legislation in which they often find themselves, indirectly worsened by the pandemic. It also calls for the proper implementation of often ignored legislation.

Too often national authorities, busy as they are with local issues, fail to show proper diligence in the cases of foreign nationals. Not all, but some employers of seasonal workers know this and use it, along with the ignorance of  workers, in order to cut corners: they invent arbitrary expenses which they then deduct from the already low wages of workers, accommodate them in cheap, cramped and cold spaces (such as barns or containers) and often fire them summarily upon any complaint, in order to keep all other workers in line.

This leads to much fewer complaints being submitted than reality would suggest. Whistleblowing protection or access to social dialogue organisation are often unavailable for foreigners.

All these and more are tackled in the resolution, found here.

However, one could argue that such abuses remain at the fringe of the issue. What troubles much more workers is what happens when all the laws are respected and still they can’t access adequate social security.

Coordination among the almost 15.000 European social security institutions at national, regional or local level is problematic in normal times as well. Enforced by EU Regulation 883 of 2006, its practice is difficult, lengthy and application is patchy.

A long-standing hot potato, the revamp of the infamous Regulation 883 has been in limbo between the member states and the EU institutions for some time. To put it simply, in the words of a diplomat from the Council, ”everyone wants their workers to receive benefits, nobody wants to pay for another country’s workers”.

Europeans working cross-border cannot often access medical services, unemployment benefits, or their pension contributions from the member state where they worked for years. When they do try, they must present evidence and paperwork which can be difficult or even impossible to acquire.

Waiting periods can last years. In the context of COVID-19, the social impact is staggering. Many of these people were never workers who could afford large economic shocks.

The revamp of Regulation 883 is nearing completion. Only two chapters remain open at this time. Should they be closed and if the 883 legislation were be implemented, the first to benefit would be exactly those worst hit by the current crisis.

A truly integrated EU labour market cannot exist without a fair level of coordination for social security. It is a pity that some member states have no qualms in using large scale labour in manual tasks but fight tooth and nail to prevent those same labourers enjoying their hard-earned benefits should they relocate or return to their home country!

The COVID-19 crisis has shown just how vulnerable we are. Protecting cross-border workers and their mobility is both a moral imperative and rewarding investment for internal market prosperity.

This is my plea for the member states and the Council – let’s act now, let’s act together, to show to our citizens that we did not endure this crisis without learning anything from it.