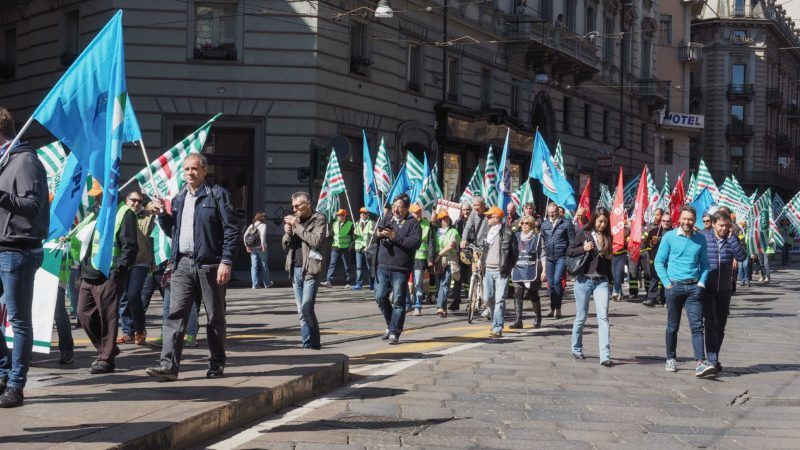 Protest march demonstration by major Italian trade unions on the occasion of an industrial action in Turin, Italy, in May 2016. [Claudio Divizia/Shutterstock]

Hats off to the Swedish Government for proposing the EU social summit that takes place on Friday, writes Esther Lynch.

A social democratic Government, led by former trade union leader Stefan Löfven, has brought EU leaders together to discuss ‘fair jobs and growth’, a topic that many feel has been too long neglected by an EU more concerned with fiscal rules than the well-being of working people.

And there is something worthwhile to discuss: President Juncker’s ‘European Pillar of Social Rights’ which is supposed to be adopted at the summit. The Pillar is made up of 20 commitments and rights including the right to “the right to fair wages”, the right to a high level of protection of health and safety at work and “the right to adequate social protection”.

One of the most innovative features is the commitment to prevent ‘employment relationships that lead to precarious working conditions’, widely understood as meaning that zero-hour type arrangements will be prohibited.

Time is running out and EU leaders absolutely must adopt the Social Pillar at the end of this week. If they do not, there will not be time before the European elections in May 2019 for the current Parliament and Commission to do anything substantial about implementing it. President Juncker’s promise of a triple-A Social Europe would be in tatters if the Social Pillar is not adopted in Gothenburg.

And that is the big test. Is the social pillar all hot air and nice intentions, as some fear, or will working people actually feel a benefit to their lives? European trade unions are determined to ensure that the EU delivers real benefits to working people. To do so, the EU has to get on with it: not just Commissioners and MEPs, but also Ministers and member states.

Trade unions – through the European Trade Union Confederation – are not simply calling vaguely for the EU to ‘do something’, but have a series of jointly-agreed proposals for what the EU should do.

The European Commission should publish an ‘Action Plan’ for implementation’ with concrete actions and commitments for enforcing each of the 20 principles and rights.

Investment to make the rights real: using EU funds to help pay for implementation of the Social Pillar.

New EU laws to enforce the rights, such as Directives on

would show the EU’s commitment to social fairness and justice, and to spread the benefits of economic recovery beyond the rich beneficiaries of tax avoidance as exposed by the Panama and now Paradise papers.

A Social Progress Protocol in the EU Treaty to assert that the single market exists to achieve social progress; that economic rules cannot have priority over social rights; that economic freedoms do not give the right to avoid national social and employment laws or to engage in unfair competition on wages and working conditions.

Time is running out for the EU – both for the Juncker-led Commission, that has made some efforts to achieve a fairer EU but has struggled to convince reluctant member states and for mainstream politicians who are losing out to Eurosceptic populists.

The European Pillar of Social Rights looks very much like a last roll of the dice.

The Social Pillar is not the promised triple AAA Social Europe but it is a threshold of decency that no one in the EU should fall below.