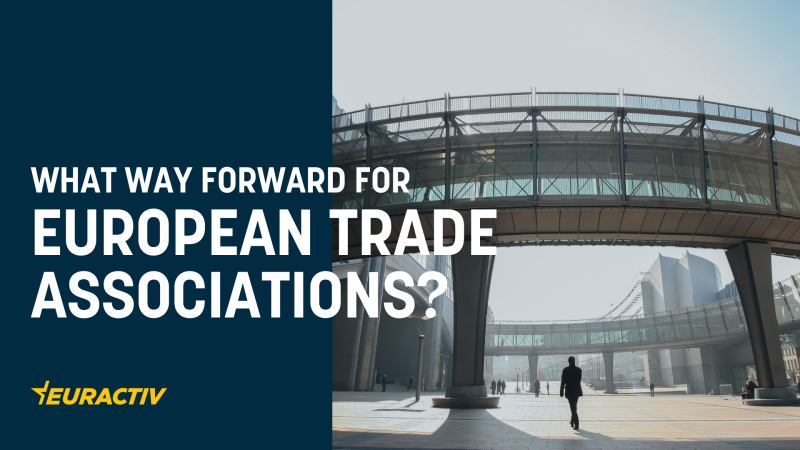 To Zoom or not to Zoom in 2022? At first sight, this might sound as an oversimplification of the challenge organisations have been facing since the gradual return to the office or any sense of tangible physicality. Yet, it sets the context any decision about future operations will have to be made in.

A recent survey by EURACTIV (and a subsequent launch event) sought to shed light on this type of issues, with a particular focus on European trade associations, a sector that the Brussels-based media outlet has long associated with.

To expand the initial question, EURACTIV sought to identify what has been the immediate impact of the pandemic on the way EU associations communicate, convene, engage and operate and chart future trends.

It was not meant to confirm any assumptions, but rather, give leading practitioners in the field the opportunity to share their recent experiences and speak of their plans ahead. What resulted is a snapshot of the moment and a peek into what the next months or year might hold.

“I think these changes are here to stay, [we will] not return to the former normal,” opined Michael Freytag, European Public Affairs Manager with the World Employment Confederation-Europe, during the launch event, while commenting on the future of the office, one of the key themes of the survey.

“The nature of the office is also changing: you are not coming to the office anymore to sit behind your desk and do your work in a silo but you come to the office to interact, to communicate, to exchange.”

EURACTIV’s study found that a significant majority of the 117 associations surveyed (75% of them) plan to give their staff members the option of working from home one or two days a week, even after the removal of teleworking measures that might still be in place for some. Yet, this has raised a number of questions.

“We need to completely reconceptualize well-being at work, profoundly. Not only put it front and centre, not only talk about it, but we need to tackle it because I think for, frankly, the last 15-20 years, it has been a thing [that] no one has really tackled head on.

That is one internal trend that we are going to have to really address, given this completely new normal of sort of hybrid, virtual; we are all everywhere and nowhere at the same time,” Joe Elborn, Secretary General of the European Youth Forum warned.

Adrian Joyce, Secretary General of EuroACE, the European Alliance of Companies for Energy Efficiency in Buildings, also speaking at the event, struck a similar tone: “When you are teleworking, you work more intensely. You find yourself constantly online.”

Challenges extend to integrating new employees, as the same speaker highlighted: “[During the pandemic,] we onboarded some new staff. Onboarding in an online environment is extremely tricky. Without that personal contact, which we advocacy people are so addicted to, it is really very hard to build a relationship.”

Another issue is the new skillset required, as Sudan Danger, CEO of the American Chamber of Commerce to the European Union, noted: “This is a mammoth new network of groups or teams, chats, all sorts of different ways, which you need to have at your fingertips to be able to communicate with everybody in this virtual world.”

But what about equity or equal chances? “We believe that hybrid meetings are discriminatory to the people who are not in the room. It is very difficult for a person outside the room to have full presence in the debate,” said Adrian Joyce of the new work environment shaping up.

Another issue that was extensively debated was that of the efficacy of advocacy in a virtual environment, the top challenge post-COVID-19 according to the survey results.

“If we cannot get in a room with people, it is harder to convey messages, it is harder to engage in policy discussions. Our impact has been limited to this effect; it was a big challenge. We are all happy to slowly go back to normal,” Emmanuel Mounier, Secretary-General of EU Travel Tech, pointed out.

This experience, however, has not been uniform: “It was actually an opportunity to get greater access to a certain extent. You found that some stakeholders had more time, it was easy for them to come on for half an hour and leave, fit in more in a day,” Susan Danger suggested.

Could any such concerns lead to further collaboration? Roxane Feller, Secretary-General of Animal Health Europe, who spoke at the event, believes so: “More and more, our members and ourselves realise that having a common message, speaking with one voice, is the way forward, rather than acting individually as one company or one association.”

Despite any concerns, the overall outlook is positive, thanks to the indispensable centrality of associations to the legislative process, but also their agility, a defining characteristic that kept coming up during the panel discussion (the average respondent has eight members of staff, and relies on centralised decision-making, according to the survey outcomes).

For now, shock-proofing associations based on the experience of the past 18 months might be the short-term plan. Diversifying revenue, upskilling and increasing impact by adopting innovative communication strategies were mentioned as potential pathway. As Joe Elborn put it, “diversification is critical.

One of the things that the pandemic has taught us is this concept of antifragility. We need to become more resilient to be able to take shocks.”

You can take a look at the event video at this link. If you would like to receive the full results of the survey, please email us at euaffairs@euractiv.com.