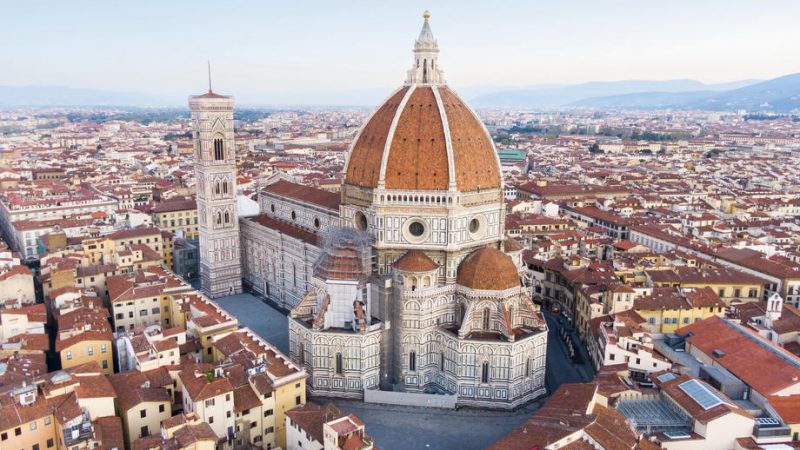 View of the Cathedral of Florence, with Brunelleschi cupola (R) and Giotto's toer (L) on sunrise during lockdown emergency period aimed at stopping the spread of the Covid-19 coronavirus. Although the lockdown and full absence of people, the scenery of the Italian squares and monuments remain fascinating, Florence, Italy, 11 April 2020 [EPA-EFE/FABIO MUZZI]

Dario Nardella is the mayor of Florence and vice-president of EUROCITIES, a network of major European cities.

In my country, Italy, doctors and nurses were confronted with a grim decision at the peak of the corona crisis: with not enough ventilators for all patients, they had to decide who to save – and who to let die.

We must do everything possible to prevent such a terrible situation from arising again.

And we must do everything possible to prevent a similar dilemma from happening in our society, in our cities.

In my city, Florence, we are being confronted with the financial costs of the crisis. More than 200 million euros are missing from the tourist tax and other revenues from our visitors, and this is only the beginning. At the same time, our expenses for those in need are increasing dramatically due to the pandemic and the lockdown.

Cities have been hit the hardest by the crisis. The state aid proposed for municipalities is by far not meeting our needs. With no additional funding coming in, cities like mine will be forced to implement service cuts. It could leave us in a situation where we will have to choose which services we can continue and which ones we have to stop.

Should it really come to that, I have already made up my mind: I am ready to pull out public lighting. I will do this before having to cut the care for the elderly and disabled, or contributions to families in need.

The situation is urgent. As city leaders, we are on the front line, serving our people. If we collapse, everything comes down.

But I believe that every crisis is also an opportunity. It’s not only time for emergency aid. It’s also time to build back better.

Instead of turning off the lights in my city, I want cities to light the way.

There are many examples of how the ‘new normal’ we are preparing for can become a new beginning.

Due to the forced lockdown, we had – and still have – fewer cars on the roads, less noise, less pollution. Do we really want to get back to what we had before? And do we really want to help the automotive industry, as the governments of some EU countries suggest, by subsidising cars with combustion engines? With an average age of eleven years of passenger cars in Europe, that would mean to postpone our climate targets by more than a decade. Clearly, we cannot afford that.

We can do better than that, as some cities already are showing. Large areas of London are being made car-free as the lockdown is eased. The streets will be reserved for pedestrians, cyclists and buses – to ‘repurpose London’s streets for people’, as my fellow mayor Sadiq Khan says. It will be the largest car-free zone of any capital in the world.

And others are no less ambitious. Milan will transform 35 km of streets over the summer, with a citywide expansion of cycling and walking. And many other cities want to keep the temporary cycle lanes they have established under the lockdown and remodel public space, for a greener, cleaner and healthier future.

As a city of art, Florence depends almost entirely on the income from over 11 million overnight stays per year. Knowing that future tourism will be different, we see the chance to develop a more sustainable model, replacing mass tourism with quality tourism. With new urban planning regulations, we want to bring back residents to the centre of Florence. The municipality wants to offer house owners a contract that makes it more attractive to rent apartments to our local families than to tourists.

Or take the economy.

Amsterdam has adopted a new framework for its post-pandemic recovery, the ‘doughnut model’. It aims to move beyond traditional economic paradigms, putting the needs and well-being of all people and the environment first.

The benefits of such an approach are supported by a recent study from researchers in Oxford that showed that green stimulus projects, as investments in green mobility, renewable energy and the retrofitting of buildings, tend to create more jobs and provide higher short-term returns.

We can build back better. To do so, we need a new collaboration between cities, regions, countries and the European Union.

Cities need direct and rapid access to national and European funding – otherwise, we will collapse. In exchange, cities have a lot to offer. We are already cooperating across borders all over Europe, to learn from each other and share best practices. We can inspire national and European politics to rebuild things better, to create a sustainable recovery.

City leaders are ready for a new pact in Europe. Together, we can make the new normal a new beginning of a better future for all.