SGI Europe: The EU institutions need to deliver on the outcomes of the Conference on the Future of Europe 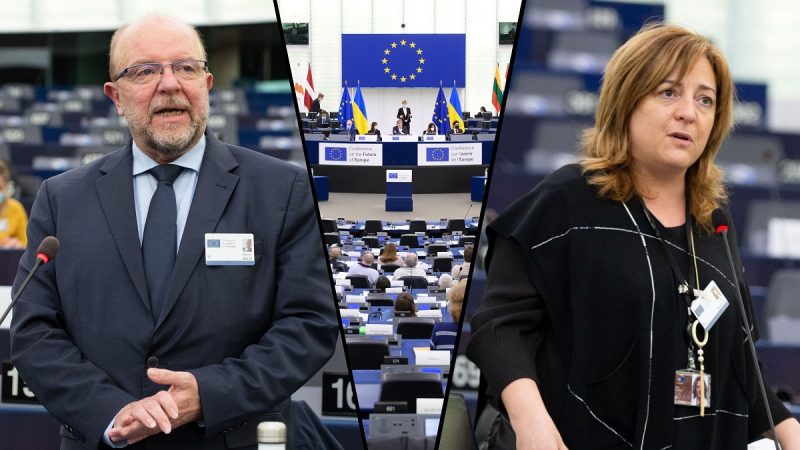 After a long – and sometimes demanding – journey, the Conference on the Future of Europe (CoFoE) is now ending. Despite the multiple crises since its inception in 2019, the CoFoE held firm against an ever-challenging environment, delivering on its initial promises to reflect on the medium to long term future of the EU and what reforms are needed.

Pascal Bolo is the President of SGI Europe.

Valeria Ronzitti is the General Secretary of SGI Europe.

Innovations never come in as perfect ready-to-go solutions. That is also true for ambitious projects like the European one.

So despite roadblocks and resistance, Europe needs to show resilience and continue to strengthen its governance and socio-economic fabric further, building upon a feedback loop with citizens and non-institutional actors: this is the strength and richness of the EU eco-system, what makes us different from autocratic regimes, and what makes us attractive not only as a market but also as a place to work, study and live freely.

SGI Europe, representing providers of services of general interest (SGIs) from across the EU, has been present and involved in the CoFoE since day one, with an open mind and always ready to support EU upward convergence based on effective and sound SGIs.

SGI Europe delivered on the spirit of the CoFoE from the very beginning, by amplifying its messages towards our members and by disseminating its objectives at national and local levels. SGI Europe also channelled the discussions of the CoFoE through our activities, nurturing its ambitions by streamlining it into the EU decision-making and attempting to lock in some of its objectives within existing structures.

In the context of the CoFoE, the exchanges of the past 12 months provided us with a very positive reality check on the citizens’ demands and expectations, representing well our long-standing core priorities and daily operations. In particular, the transversal calls to boost public and private investments in infrastructure and SGIs stand out as the critical linking feature throughout the final report of the CoFoE.

From health to climate, education, the economy, or the reinforcement of Europe’s geopolitical standing, security and democratic values, ambition and investments will be needed to deliver on those expectations concretely.

Based on the calls from the CoFoE in light of the lessons learnt from the COVID-19 pandemic, it is now clear that health policy should become a central pillar of the future EU resilience and security.

The EU now needs to push further to increase cooperation and preparedness at EU and national levels, channel adequate investments in our healthcare systems, including research, innovation and resilience, and reflect on possible shared competencies on healthcare matters where EU actions have a clear added-value.

Under the worst of times, the EU Common Vaccines Strategy, combined with the quick adoption of the EU Digital COVID Certificate, proved to be a great success, allowing the reopening of our economies and restoring trust in public authorities’ ability to lead us out of the pandemic. A collective effort, a common resolve and a united spirit. This approach should remain central in our EU actions moving forward.

Climate change and the preservation of the environment are also taking a central stage in the CoFoE final report, calling for doubling down on our efforts to achieve the objectives of the Paris Agreement and the EU Green Deal.

Securing Europe’s energy independence, reducing our reliance on fossil fuels, supporting transitional energies and investing in innovative and efficient public transport, stand out as key objectives on which institutions at all levels, together with citizens and stakeholders, must work together in a collective political effort, in continuation with the CoFoE.

Yet, this effort, intertwining energy and climate policies, requires funding and financial commitments to make it a success. In this respect, the Conference rightly puts the spotlight on the effort needed to make Europe the global leader for climate neutrality in the future.

Both as a social partner and as an active member organisation of the European Movement International (EMI), SGI Europe contributed to the works of the CoFoE, providing inputs on both our areas of direct expertise but also addressing the bigger picture and contributing to proposals going beyond the traditional comfort zone of employers’ organisations, such as discussing values, the rule of law and democracy.

The CoFoE was made possible thanks to the political will of the EU institutions. Its success was made possible by the cooperation between EU, national, regional and local Institutions, citizens, social partners and stakeholders from civic organisations.

Those who actively contributed and engaged in an innovative and healthy bottom-up democratic participatory exercise contributed to its ambitious conclusions.

We all invested capital, time and resources in doing the CoFoE work and delivering on its promises. We now count on national and European institutions to listen to the citizens’ demands and translate them into concrete initiatives.

It is only by acting together, by providing collective answers to vital common challenges, that we can secure a bright future for Europe and its citizens. SGI Europe will contribute its part with the EU institutions, and all the other actors involved, to transform those recommendations into reality.