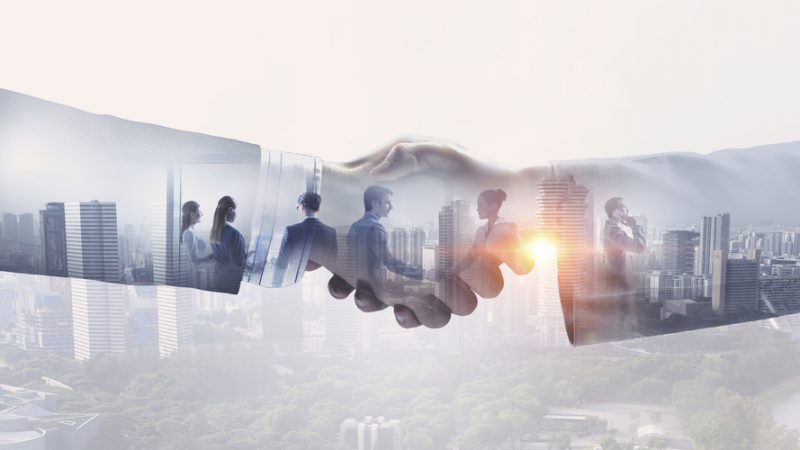 Companies in which employee representatives have a seat on the supervisory board have developed more favourably since the great financial and economic crisis than companies without codetermination. That applies to operating profits, capital market valuation, employment development and investments in capital assets and research and development. For example, between 2006 and 2011 cumulative shareholder returns in companies with codetermination were 28 percentage points higher than at comparable firms without workers’ participation. This was the outcome of a new study by Marc Steffen Rapp of the University of Marburg and Michael Wolff of the University of Göttingen.

During the crisis codetermination restrained companies from engaging in short-term behaviour and subsequently ‘facilitated a faster resumption of growth mode’ write the two business administration professors in a study commissioned by the Hans-Böckler-Stiftung. According to them, these findings are highly significant also with regard to the future, as digitalisation and globalisation continue to advance. Workers’ codetermination in the supervisory board can ‘be understood as an element of modern corporate governance that is able, in the face of increasingly volatile economic conditions, to cushion possible risks arising from strategic transformation processes’.

The two economists looked at 560 listed European companies to evaluate the effects of workers’ participation in the supervisory board, including firms listed in the Dax, the MDax, the TecDax and the SDax. They compared companies from Germany, most of which have codetermination, with matching companies of similar size from other European countries that are active in the same sector and similarly strongly diversified, but lacking codetermination. In the study, Siemens and the Swiss company ABB were compared, for example, or Continental and Michelin.

On this basis Rapp and Wolff deployed a range of analyses to achieve the most comprehensive picture possible of the companies’ behaviour and development. The complex analytical methods used were intended to ensure that observed differences are really due to the fact that some employees work in companies with codetermination and others do not and not to statistical ‘background factors’.

Operating profits: as benchmarks Rapp and Wolff used the key commercial indicators return on assets and return on sales, calculated as the ratio between operating profits and total assets and turnover. First of all it can be seen that most companies’ profitability suffered during the great economic crisis of 2008 and immediately afterwards. That is scarcely surprising. However, according to the authors of the study this development ‘was reduced and sometimes even entirely offset by codetermination’, so that companies with workers’ participation in the supervisory board performed significantly better. This is particularly significant in the case of return on sales. At companies without codetermination this fell by 3.1 per cent at the peak of the crisis, while in companies with parity-based codetermination it rose by 2.7 per cent. In the years after the crisis the profitability of firms without workers’ representatives initially continued to fall. In companies with codetermination it rose by a further 1.4 per cent 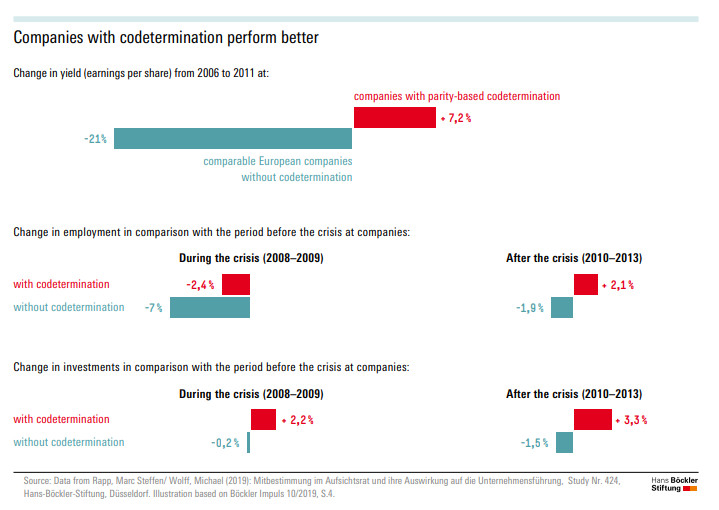 In order to get an idea of capital market valuations Rapp and Wolff looked at share yield, calculated as annual dividend per share divided by price per share or current market price divided by net asset value. They find a significant positive influence on these two variables: ‘in the case of capital market performance companies with codetermination registered higher profits over the period, experienced milder fluctuations and exhibited a more modest decline in company valuations’ during the severe crisis. Specifically, from 2006 to 2011 cumulative shareholder returns in companies with codetermination were 7.2 per cent. In the European comparative group of companies without employees on the supervisory board or the board of directors, by contrast, the figure was –21 per cent.

Instead of cutting jobs, according to the researchers, companies with codetermination were more likely to ‘adjust wages downwards’. It can be observed that, prior to the crisis, average pay in companies with codetermination was markedly higher than in companies without it. This gap closed somewhat in the course of the crisis, but was restored subsequently. The fact that large German firms often reduced working time rapidly and substantially during the crisis probably also played a major role. Employees were able to ‘cash’ time credits on their working time accounts or even ‘go into the red’ with regard to working time, as the temporal ‘overdraft’ was made good again with the upturn of the economy. We know from ergonomic research that such accounts are encountered much more frequently in companies with codetermination than in other companies. One reason for this is that when employees are backed up by a works council and collective agreements they are more likely to get on board and ‘set aside’ working time without demanding immediate payment.

In contrast to companies that made many employees redundant, companies with codetermination and stable employment were in a position to expand production again rapidly after the crisis had passed.

Fewer debts, fewer acquisitions: According to the study, before the crisis companies with codetermination were more prudent financially. For example, they spent less on share buybacks and were less likely to make acquisitions. They also accumulated fewer debts. During the crisis no significant differences in financial conduct were noticed, probably because other companies also reined in their activities. After the end of the crisis debt levels at companies with codetermination fell much more rapidly, however.

Summary: codetermination as an opportunity

In conclusion the study, in the context of the recent financial and economic crisis, provides a very positive picture of codetermination in the supervisory board, along a number of dimensions. The authors thus attribute to workers’ participation in company management the potential to create a triple win–win situation. ‘In this context company codetermination can make it possible to better absorb risks in relation to the company’s situation and also to the individual situations of employees, thereby also protecting the economy as a whole’. Rapp and Wolff take a positive view of codetermination: ‘Ultimately, workers’ participation in the supervisory board within the framework of future transformation processes should thus, generally speaking, be regarded not as a hindrance but as an opportunity.’