The Brief – Don’t bank on an ECB rescue from stagflation 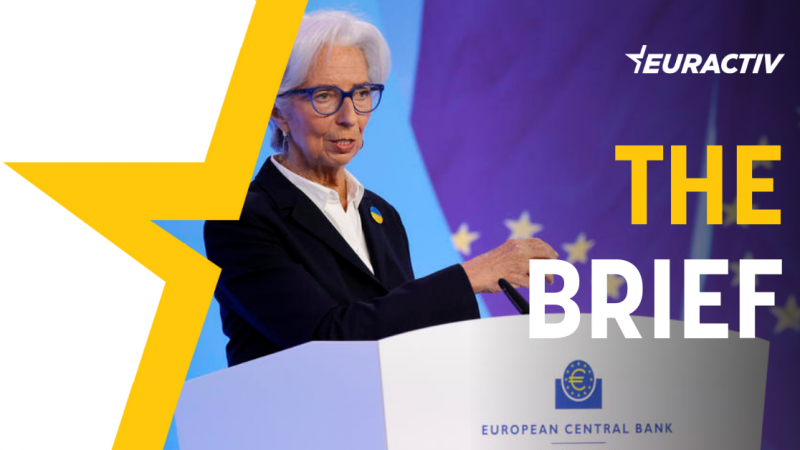 Central banks in Europe always used to be dull institutions run by dull men in double-breasted suits, but over the last 15 years, they have acquired a reputation for interventionism.

Following the 2008 financial crisis, the European Central Bank (ECB) did the most to keep businesses afloat. Four years later, while the European Commission and Germany dithered and delayed, the ECB came to the rescue yet again to quell the eurozone debt crisis.

More recently, as EU leaders battled over the terms of the €700 billion Recovery and Resilience Fund in 2020 and 2021, the ECB quickly ramped up its bond-buying programmes to keep money flowing.

Amid all this, the ECB has become a rather political institution.

After Wim Duisenberg and Jean-Claude Trichet, both central bankers of the old school, came ‘Super Mario’ Draghi. His successor, Christine Lagarde, is also more a politician than bean counter.

But with Europe facing the economic double whammy of price rises and flat wages, known as stagflation, there are no more monetary rabbits the ECB can readily pull out of the hat.

The bank won’t come to the rescue this time. Instead, it is likely to increase interest rates this year (as will Fed in the US), and the quantitative easing from the pandemic will come to an end.

Lagarde is likely to confirm this following the Governing Council’s meeting on Thursday, its second policy meeting since Russia invaded Ukraine on 24 February.

This year would have been painful enough for Europe’s households without the war. After splurging on support measures to help businesses and individuals survive the COVID pandemic, tax rises were already going to squeeze spending power.

Annual inflation in the eurozone has surged to 7.5%, while energy prices are up 44.7% yearly. And neither governments nor the ECB has any silver bullets left.

Fuel prices have soared, and that is just for starters. Several countries, particularly in North Africa, report bread and wheat shortages because of the disruption to Ukrainian and Russian exports. Who knows what the price of bread and pasta will be in six months?

“Europe is entering a difficult phase. We will face, in the short term, higher inflation and slower growth,” Lagarde said last week.

“The longer the war lasts, the greater the costs are likely to be.”

While EU countries have, with several exceptions, generously welcomed Ukrainian refugees and promised to do what it takes to arm Ukraine, the final price tag is hefty and increasing by the day.

Moreover, public opinion is fickle and if, as expected, millions of Europeans plunge into poverty this year, that generosity will wear thin. When Europeans can no longer afford to fuel their cars, heat their homes and put food on their tables, they are going to want help.

Both Emmanuel Macron and Marine Le Pen, the candidates that qualified for the second round of the French presidential election, support the revival of nuclear energy. However, they differ in their ambitions, strategies and modus operandi.

Far-right candidate Marine Le Pen has unveiled how she plans to govern France if she wins the run-off against President Emmanuel Macron, stressing that she would rely on  “consulting the people” through referendums.

While foreign aid from countries of the Organisation for Economic Cooperation and Development (OECD) reached historic highs in 2021, data analysis shows this was primarily fuelled by donating COVID-19 vaccines, many of which were out of date or unusable.

An upcoming scientific study expected before May is assessing the available detection methods for pneumonia-causing Legionella bacteria in the light of the new monitoring requirements included in the recently revised EU’s tap water rules.

Speaking of health, do not miss our weekly Health Brief.

View’s are the author’s.