The Brief – Ursula needs a ‘State of the Fusion’ 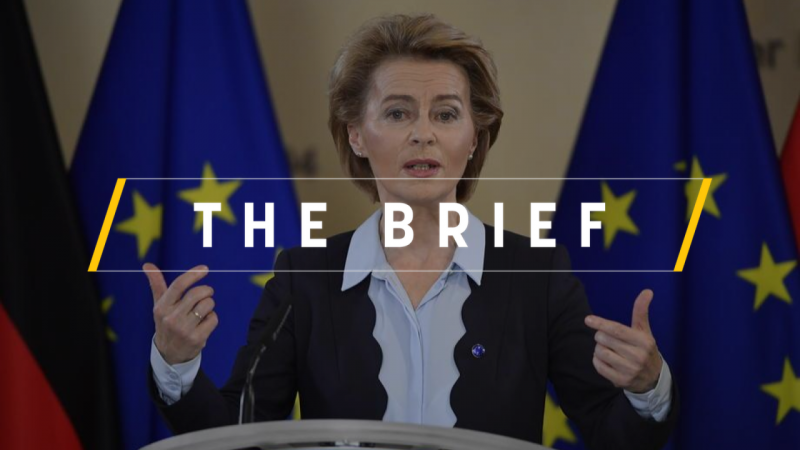 Ursula von der Leyen is already starting to prepare her first ‘State of the European Union’ address, due in the autumn. She is not the first leader to face an economic downturn or be in urgent need of a way to lift the morale of crisis-hit citizens or catch up in the technology race.

John F. Kennedy gave a special address a few months after he became US president to announce in 1961 that, by the end of that decade, his country would land on the moon.

At that time, the US was struggling to overcome an economic crisis, had just suffered the humiliating Bay of Pigs defeat and was losing the space race against the Soviet Union.

Now, von der Leyen has the opportunity to move from the defensive stance imposed by the virus crisis to an offensive one by unveiling a legacy-shaping initiative.

Last December, she said that the Green Deal is “our man-on-the-moon moment”.

But the proposals on the table hardly honour this ambition. Incremental solutions are not going to help us achieve our climate goals. The world needs radical solutions in order to keep global warming well below 2C or curb it at 1.5.

During the ‘great confinement’, with factories closed across the planet and mobility reduced to a minimum,  daily global CO2 emissions decreased by –17% in early April, compared with the previous year.

It is not the first time that this Brief’s author has told you why successful nuclear fusion would be our moon-landing moment. And it will be very much aligned with our own European narrative, as the energy dimension is very much rooted in the inception of our union.

The promise of safe, cheap, unlimited, clean energy has long been the Holy Grail of science. Europe is already working on it through its ITER project, which aims at proving that fusion is commercially viable.

But the project has been criticised for going over budget and suffering some delays, as well as persistent doubts about its benefits.

This time can truly be different. There is a unique opportunity to invest the political capital and financial resources needed to make it happen.

Landing on the moon cost US taxpayers around $150 billion, a total of 5.3% of the federal budget. But for every dollar invested there was a $5-7 return in new products, processes and jobs.

Meanwhile, EU funds for ITER represented 0.00011% of payments under the current multi-annual financial framework. This time around, the Commission proposed €7 billion for ITER up to 2027, which should cover the operational phase.

But more resources should be available if needed to achieve what could be a turning point in our production model, with potentially vast ramifications in new industries and materials. More than €1.8 trillion is now on offer under the combined MFF and recovery fund.

In addition, the recent unprecedented scientific cooperation catalysed by the pandemic and the race for a vaccine illustrates the great progress that could be achieved with a powerful mission when our future and well-being are at stake.

“It may turn out that [the space programme’s] most valuable spin-off of all will be human rather than technological: better knowledge of how to plan, coordinate and monitor the multitudinous and varied activities of the organisations required to accomplish great social undertakings,” wrote Science magazine.

In her first ‘State of the Union’, von der Leyen could pledge to achieve, by the end of this decade, not only a ‘moonshot’ to reconcile our growth model with our planet’s well-being, but also the promise of bringing together global powers and turning rivalry into cooperation under ITER.

A sovereign Europe may not be a stronger Europe capable of competing in a race we do not stand much chance of winning. But it is a union capable of reshaping the game and bring everyone together under a common mission.

EU leaders are locked in budget talks and look set to remain there for some time. There are still big divisions that might push the summit well into the weekend. All the details about where the power players stand are here in Beatriz Rios’ curtain raiser.

Portugal’s former finance minister and the ex-head of the Eurogroup, Mario Centeno, is the Iberian country’s new central bank governor. But is this a case of revolving door syndrome?

Budget talks seem pretty obsolete when viewed from 70 million kilometres away. At least that’s where the ESA’s ground-breaking satellite is currently located, beaming back first images of the Sun for analysis. They have already yielded new discoveries.

BMW inked a €2bn deal with a Swedish battery maker, as its e-mobility plans ramp up.  The next generation of warplanes might yet be powered by batteries, whether it’s onboard laser weapons or the engines themselves. More details here.

Norway’s government got the green light to invest more than €2bn in the rollout of carbon-capture tech, which Oslo hopes will finally kickstart the industry. A new report has warned that a fifth of soy bean imports from Brazil are produced on illegally deforested land.

Structural discrimination against the elderly apparently increased during lockdown, a new study finds, but there might be some hope that the pandemic might yet help bridge the generational gap.

Check out the latest editions of the Agrifood and Digital briefs, complete with podcasts, as well as the tail end of our ongoing Special Report on Europe’s quest for sustainability in food production.

A long night (and probably weekend) of EU summit talks. Look out for our coverage on the website. And to amuse yourself in the meantime, here’s the EUCO leaders imagined as characters from Batman.