The digital euro concerns the whole society, not only finance 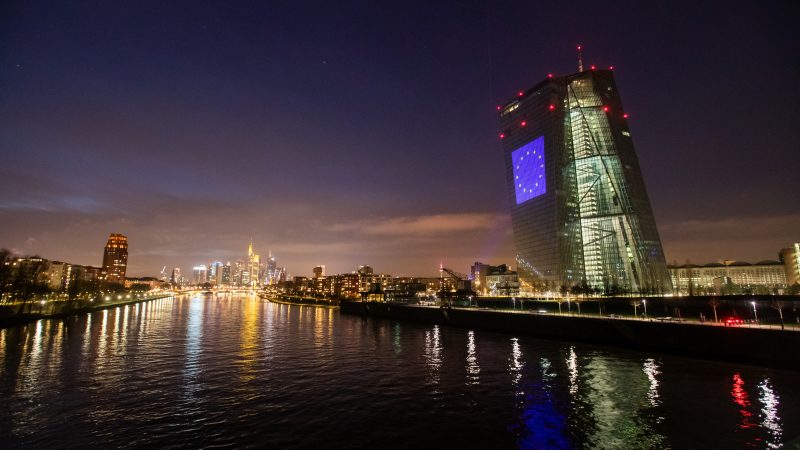 The European Central Bank (ECB) headquarters is illuminated with various motifs to mark the 20th anniversary of the euro in Frankfurt am Main, Germany, 01 January 2022 [CONSTANTIN ZINN (EPA-EFE)]

While the development of a digital euro offers new opportunities for Europe, they can only be seized if civil society can take part in this discussion, argue Tristan Dissaux, Jézabel Couppey-Soubeyran, and Wojtek Kalinowski in an opinion piece signed by more than 100 scholars and NGOs.

Tristan Dissaux is a researcher at Université Libre de Bruxelles. Jézabel Couppey-Soubeyran is an associated professor at Paris 1 Panthéon-Sorbonne and Paris School of Economics. Wojtek Kalinowski is the co-director of the Veblen Institute for Economic Reforms .

As the euro celebrates its 20th anniversary, the European Central Bank (ECB) investigates the possibility of creating a “digital euro” in addition to the coins and notes that we still use, but less and less, in our daily transactions.

Unlike bank cards and other payment systems, the digital euro would be a “central bank digital currency”, i.e. a currency issued and guaranteed directly by the ECB, accessible and usable by all.

As such, it offers new opportunities for our societies and for the Euro itself, challenged as it is by numerous private digital currency projects. But is the ECB willing to seize these opportunities?

Access to central bank money in digital form is currently restricted to banking and financial actors; a digital euro would make it available to all individuals and economic actors. A digital euro could make our payment systems more inclusive and less expensive for the poorest parts of the population.

It could also be used to implement new economic, social or environmental policies by enabling monetary transfers to all European citizens. Finally, it could reinforce the legitimacy of the single currency by putting it more clearly at the service of European citizens.

However, there are reasons to fear a missed opportunity. The ECB seems to consider the new digital currency as a purely technical tool disconnected from any social or political considerations, and the preparations advance without any real involvement of citizens, in a top-down and technocratic manner.

Although the ECB has announced its intention to collaborate with all actors of the society, for the moment it has only set up a group of 30 experts (the Digital Euro Market Advisory Group) exclusively from the banking and financial sectors. These experts are, as a matter of fact, in a privileged position to shape the concrete form of the digital euro.

As for the Euro Retail Payments Board, which does include two consumer associations among its 20 members, it is only invited to give feedback on specific outputs to be submitted by the ECB. Citizens will only be involved through a few focus groups, the details of which are unknown.

The public consultation already organised by the ECB and closed in January 2021 cannot justify not involving European citizens more widely.

The democratic stakes implied deserve much more than an online questionnaire hardly publicised, little accessible and which does not allow for the comprehension of the subject, while most people are unfamiliar with the whole issue.

We therefore call on the ECB to truly involve the society in the current investigation of the digital euro and to broaden the discussion to the objectives that could be pursued with the help of this monetary innovation.

This requires first of all transparency on the activities and discussions carried out within the ECB about the future digital euro, as well as the possibility given to civil society and academic actors to take part in them.

Second, we call on the ECB to initiate a true public debate about the digital euro, informed and enlightened, within the member states.

Most of all, we need our democracy to get involved. The matter is not only technical, it is above all political as the digital euro concerns us all.

We therefore call on the European Parliament to take on this issue as part of its monetary dialogue with the ECB. This dialogue is the main framework established by the Treaties where our democracy can express itself on the objectives of monetary policy.

It should thus include the objectives of the digital euro, without being reduced to a pure formality where Parliament simply takes note of decisions that have already been taken.

The future digital euro must be considered as a public good. Its preparation phase offers a unique opportunity to involve citizens, their representatives and civil society actors into a broader discussion about how the digital euro could help the eurozone countries to better address the multiple crises they face.

These options will heavily depend on the technical design chosen, which should therefore not be preempted by financial and banking actors.