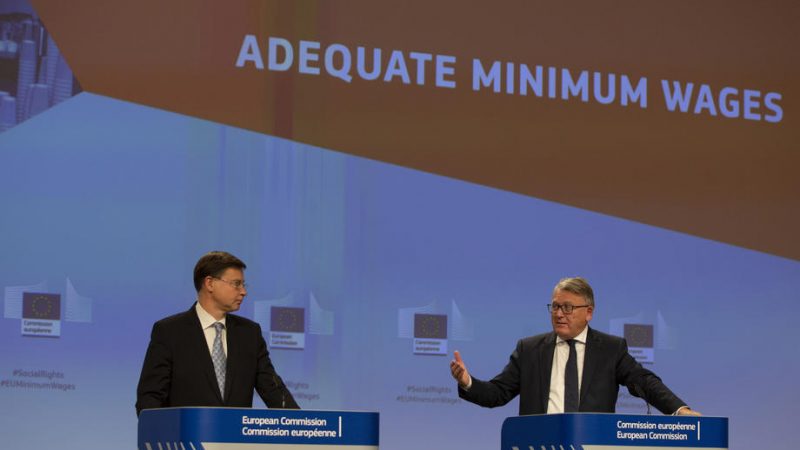 LO will not, for the time being, participate in the work of the Executive Committee of the ETUC or any work related to wage and collective bargaining issues and will limit all other participation in the ETUC’s work. The LO Executive Council has also stated that it lacks confidence in the ETUC leadership.

As a trade union federation we are accustomed to both negotiation and compromise. We know that trade union strength is based on unity and broad worker alliances.

But we also know where the red lines are drawn when Swedish workers’ fundamental interests are threatened. LO can neither confer legitimacy nor contribute extensive resources to an organisation that undermines what generations of national trade union struggles have achieved and built up.

In the autumn, the ETUC contributed to the adoption by the European Parliament of a proposal which, on several points, blatantly contravenes the EU Treaties and threatens to seriously undermine the self-regulation of the Swedish labour market through collective bargaining.

It is no exaggeration that the Swedish collective bargaining model is facing its most serious external threat in modern times.

European labour markets are very diverse and the ETUC member organisations often have different means to achieve our common trade union goals. However, cooperation within the ETUC has worked through a fundamental pact on the wage issue, based on respect for each other’s different strengths, traditions and conditions.

The pact has created favourable conditions for uniting the interests of European workers, ever since LO helped to found ETUC in the 1970s.

As recently as at the ETUC Congress in Vienna in spring 2019, this compromise was confirmed during the negotiations before and during the Congress. Wages would remain a national issue and proposals for a European framework directive on wages were rejected.

The Swedish trade unions did accept a formulation on non-legally binding EU recommendations on wages. The most important thing, however, was that we would continue to support each other’s different wage policy work, and not try to enforce a one-size-fits-all approach.

As before, the starting point was respect for the widely differing European labour market models and disparate national trade union wage strategies.

However, the ink on the congress documents had barely dried before the ETUC leadership was deeply involved and proactive in the new Commission’s initiative on European minimum wage legislation.

The ETUC leadership argued that congress resolutions can be adjusted by the Executive Committee during the congress period. If the ETUC Constitution is to be interpreted in such a way, our European trade union organisation has a democratic problem. For LO the problem is far greater than that.

The fundamental pact on wages within the ETUC is closely interwoven with LO’s support for the whole EU project.

An absolutely crucial prerequisite for a majority in the Swedish trade union movement to support Swedish accession to the EU during the 1994 Swedish referendum was the political guarantees given by the European Commission at that time that the foundations of the Swedish labour market model would be left untouched.

The fact that a majority in the Swedish trade union movement advocated EU membership in the referendum then became important for the end result of the closely run vote.

All through last year LO pragmatically sought a new secondary solution, despite our fundamental objections to all forms of European legislation on wages. With the goal to satisfy the will of a majority within ETUC for a minimum wage directive, but where Sweden and Denmark would be exempted from all or parts of the legislation.

Considerable time and resources have been devoted to this to prevent devastating divisions in both the European trade union movement and between European Social Democratic parties.

The work has been carried out in close cooperation with Members of the European Parliament from the S&D Group. Initially, the ETUC leadership seemed interested in this new fundamental compromise in the European labour movement.

But last autumn, the Scandinavian attempts to find new compromise solutions were rejected by the ETUC leadership, in connection with the decisive votes in the European Parliament.

We will always support our colleagues and friends in trade unions in other countries in their work for decent wages where minimum wages are primarily a state responsibility. For LO, giving priority to the lowest wages is a key factor.

The fight against underbidding competition and social dumping is transnational. However, we can never accept that the methods for raising the statutory minimum wages will result in undermining Swedish workers.

It is not enough with vague and non-binding political guarantees. We have already received numerous such guarantees over the past two years or more, not least from the European Commission.

We need robust legal protection for the Swedish autonomous self-regulation of the labour market through collective bargaining, which can withstand review by the European Court of Justice.

Respect for our differences is a requirement for achieving our common objectives. A clear and robust exemption for the Scandinavian wage models in the coming EU directive is fundamental to update the pact on wages within the European trade union movement.

The great and successful struggle of trade unions has been crucial in lifting people out of poverty and vulnerability through collective strength and determination. That struggle is based on the sacred principle that united we stand but divided we fall.

Those responsible in the ETUC leadership need to bring the European trade union movement together, not to continue to divide it. In the current situation, the ETUC does not in any way represent LO in the ongoing negotiations on a minimum wage directive.