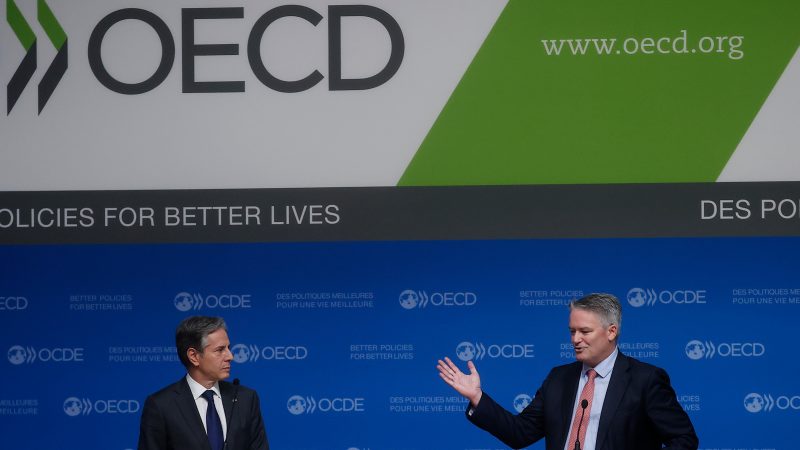 Aspects of the global tax reform agreement which have largely gone unnoticed are likely to come in for closer scrutiny in national parliaments of EU countries and in the European Parliament where some pushback can be expected, writes Dick Roche.

As the years-long marathon on global tax reform came into the final strait on Friday (8 October), the finish line is now close. The US, which has dictated the pace of developments since April, is the front runner in terms of achieving its goals. The unlikely contender for the silver medal is Ireland, which has run a very successful defensive race. Europe, having conceded ground, is down the field.

In Washington, the draft agreement is seen as a hands-down US victory.

The US has reason to trumpet its position as the Biden administration has determined the direction of travel in negotiations.

The arrangements brought to the table in April by the US aimed to strictly limit the number of US companies captured by the new arrangements, to spread the tax net beyond the digital sector, to ensure a global minimum tax level and to halt Europe’s move to digital service taxes. It can claim at least a partial victory on all fronts.

The US has determined that the principle of taxing multinationals where they do business and accrue profits, a key element in the draft agreement, will be tightly circumscribed. The key Pillar One proposal on this will apply only to multinationals with a global turnover of over €20 billion and profitability above 10%.

The US was less successful on the minimum tax rate. The Biden administration sought a minimum rate of 21%, the final agreement provides a 15% minimum rate, a point returned to below.

Washington had a hands-down victory on digital service taxes. The agreement signed off on Friday requires “all parties to remove all Digital Services Taxes and other relevant similar measures — and to commit not to introduce such measures in the future.”

Like the US, Ireland came to the negotiating table with very specific objectives in mind.

From the outset, Ireland was supportive of the aims of the BEPs process. It committed to the proposition that taxing rights should be assigned to countries where multinationals do business and take profit. However, it stands to lose over €2 billion under the agreement’s Pillar One provisions.

Ireland was adamantly opposed to the proposed wording on the issue of a global minimum rate.

Specifically, Ireland was not prepared to accept the proposal for a minimum tax rate of “at least 15%”. It saw this wording as putting its tax structure in the crosshairs of those who have long harbored an obsession with Irish tax rates. Ireland. was not prepared to allow an ambiguously worded agreement to tee up future hazards for its decades-long policy of low and stable corporate tax rates.

A related concern was that any agreed minimum rate would not apply to businesses with a turnover below €750 million, the threshold at which the minimum tax kicks in.

Gritty determination paid off. Ireland received three assurances, the words “at least” would be dropped, Ireland could retain its 12.5% corporate tax rate for businesses below the €750million threshold – benefitting 99.9 % of the companies operating in Ireland – and, most importantly, the EU Commission agreed it will not seek to “gold plate” the agreement when transposing it to EU law.

These assurances make it highly unlikely that the agreement will drive any multinationals currently based in Ireland to shut up shop – there will be no tax advantage in doing so. The fight to retain tax certainty will not have gone unnoticed in major corporations contemplating looking for a home for future investment locations.

The EU has not had a good marathon and has lost ground.

The new arrangements will give some EU states a significant boost in tax revenues in other cases, the gain will be modest, and some member states will lose revenue.

To a surprising degree, Europe has signed up for constraints that limit the extent to which the draft agreement will deliver real reforms in the global tax system. Principles have been compromised and little gained.

Europe has allowed the US to limit the application of the key principle that MNEs should pay profits where they do business and take profit to a point where only a fraction of the MNE profits captured will be available for distribution in Europe.

As previously discussed in EURACTIV,  Europe, which sees itself to the fore in the climate debate, has signed up for the extraordinary decision to exclude multinationals in the oil, gas, and mining sectors from the global tax reform arrangements – rewarding companies with appalling environmental records.

Europe has also decided to exclude the banking sector from the tax reforms, a decision which a study released in July estimates will cut the revenues coming under the agreement by 50%.

For all the hype that the agreement has attracted, these exclusions and carveouts will mean that most MNE profits will continue to be taxed on the basis of corporate residency as they are at present.

Arguably Digital Service Taxes which the EU has agreed to drop, could deliver more revenue to member states and do so in a way that gives individual countries more control.

Most striking of all, European member states have been willing to surrender important elements of tax sovereignty during the  behind closed doors OECD  discussions in a way that they would not readily contemplate in the context of a European treaty.

Aspects of the agreement which have largely gone unnoticed in the OECD process are likely to come in for closer scrutiny when the final proposals come for discussion in national parliaments and in the European Parliament, where some pushback can be expected.

An even closer scrutiny of what the marathon process has produced can be expected when the legislation required to translate it into law comes before the highly partisan US Congress.

The tax marathon still has some rough terrain to cover before the finish line is reached.