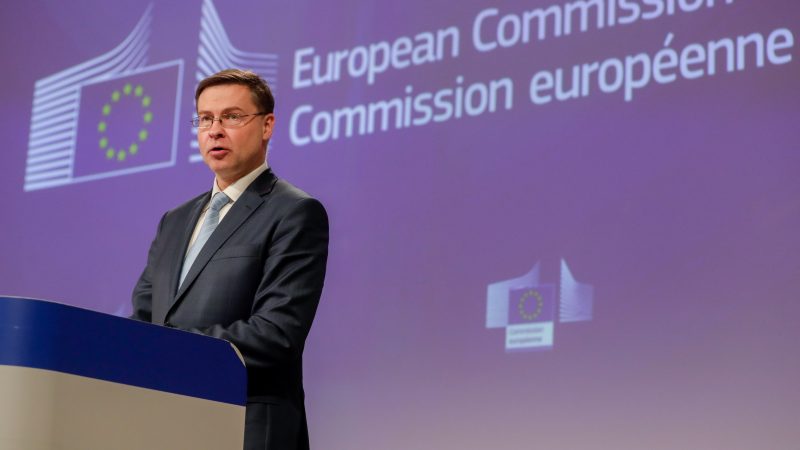 European Commissioner in charge of Economy Valdis Dombrovskis gives a press conference to present economic response to the coronavirus crisis at the European Commission in Brussels on 13 March 2020. [EPA-EFE/STEPHANIE LECOCQ]

Over the last decade, public export credit insurance has become one of the major instruments of trade policy, used to support and encourage exports. According to the figures of Berne Union members, public credit insurance covered more than one trillion of US dollars of new transactions in 2018, writes Matija Vodoplav.

Matija Vodoplav is a PhD student in Law at the Université de Tours in France. The article represents the author’s personal opinion.

To encourage exports means to increase domestic production, economic growth and jobs and have a better balance of trade and public finances.

However, despite the strong public support that exporters from some countries have, in particular in East Asia, European exporters do not benefit from support at the EU level and are facing a mosaic of national public export credit insurance programmes.

We believe that policymakers should examine the possibility of establishing a European public export credit insurance programmes that could provide risk cover, in addition to national programmes, for extra-EU exports from all member states. Such a unified instrument would allow exporters to benefit from the collective European economic and commercial strength.

Public export credit insurance protects exporters from the risk of non-payment of goods or services exported. It is provided by Export Credit Agencies (ECA) and is backed by a state guarantee enabling exporters to continue their activities with a significantly reduced risk.

The regulation is focused on the protection of competition on the internal market on one hand and, on the other, on the harmonisation of the conditions of state support. Public export credit insurance in the EU is granted under the same market rules as the private credit insurance and represents, therefore, an additional source of protection for exporters.

When the existing EU rules on this matter were created, in the late nineties, the EU and the World economies were very different. Uniform rules do not mean that exporters around the EU have the same access to public export credit insurance.

In fact, since its allocation is exclusively in the hands of member states, exporters are treated unequally, depending on the member state of their establishment. The offer of public export credit insurance differs across the EU and depends on the mandate and sophistication of each individual ECA.

Although the offer of each ECA is conditioned by characteristics of national economies, unequal support for exporters that wish to export outside of the EU may discourage large and specialised exporters to establish themselves in member states with less sophisticated and smaller insurance programmes, strengthening the existing economic gap.

As the public export credit insurance is backed by the state guarantee, the strength of insurance cover depends on the financial strength and stability of member states. Exporters from states with weaker public finances and lower sovereign ratings benefit from a weaker cover than the ones from financially stronger states.

Exporters that have pan-European installations and production lines are also disadvantaged under the existing framework because to benefit from national public export insurance, a certain percentage or value, usually around 50%, of the exported product has to be produced locally.

Production across several member states may, therefore, disqualify the product from support.

Establishing European extra-EU export insurance, supported by an EU guarantee, would allow exporters access to unified capacities of identical insurance products of the same strength regardless of the member state of their establishment.

Such a single export insurance programme could provide direct insurance and act in coinsurance or reinsurance of national ECAs.

In addition to benefits to the EU economy, such a programme would also help exporters to counter international competition. Numbers show that member state ECAs, even from bigger economies, struggle to compete with export insurance from other major world economies.

OECD estimates that in one decade its support surged from USD 3 billion in 2002 to USD 397 billion in 2013. United States ECA estimates that in 2018, the largest providers of public export credit insurance for the short-term export transactions to OECD and non-OECD countries, after China, were Korea, Japan, Canada, India and Russia, while Germany, the largest EU economy, came in sixth.

This instrument has also been one of the pillars of China’s Belt and Road initiative where, according to official figures found on the Sinosure’s website, by the end of 2017, the total insured amount granted by Sinosure for projects related to the initiative was almost $510 billion.

On the other side, the European Commission reports that the aggregate value of support for medium and long-term transactions, of top five EU public export insurance providers, Germany, France, Sweden, Italy and Netherlands was around €244 billion.

Establishing public export insurance of the EU would not only help to kick-start the EU economy and increase its presence around the world but would also help to equalise export opportunities of companies across the Union.