In particular, an active civil society contributes significantly to a new cohesive society in the 21st century. [Arthimedes/shutterstock]

Andreas Grau and Julia Tegeler are project managers at the Bertelsmann Stiftung.

Megatrends such as globalisation, digitalisation and demographic change are accelerating the centrifugal forces that threaten to drive society apart.

The rift across society is only getting wider. Such a trend calls for joint efforts to ensure that our society can continue existing and still be cohesive.

Social cohesion is crucial in ensuring society is worth living in and fit for the future. In societies with strong cohesion, people have stable, trusting and diverse social relationships, as well as strong and positive emotional ties with the community. In other words, people feel that they belong and are part of a larger whole.

Moreover, they strongly support the common good because people are more willing to take responsibility for the community and to care for the weak and needy.

In our experience, three areas can be identified by which social cohesion can be measured: 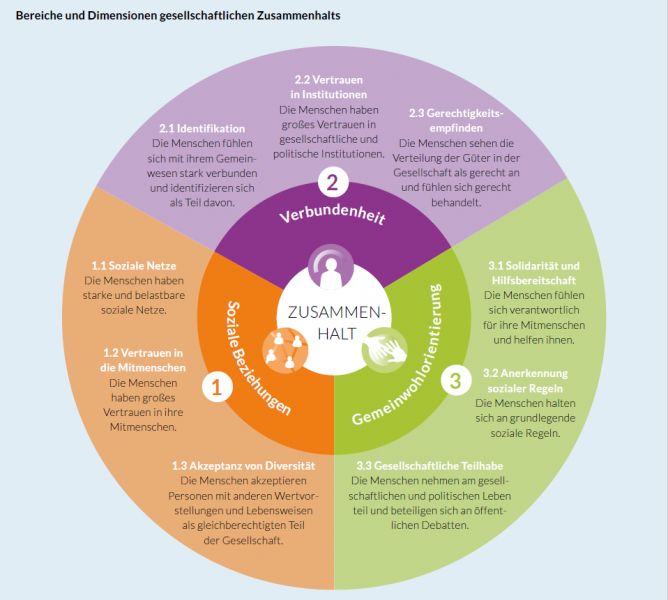 Based on this 3-part model, cohesion appears to be currently at risk of becoming fragile in some areas.

Firstly, this can be seen in the trust placed in democratic institutions. Although trust in Germany’s Bundestag, its state parliaments, state governments and political parties have hardly changed in recent years, trust in the German government has suffered significantly.

There are also considerable regional differences in Germany, but also Europe.

Compared to its western counterpart, Eastern Germany is less in favour of democracy being the best model for government. Peoples’ satisfaction with experiencing democracy also significantly differs between East and West.

Secondly, accepting diversity and how to deal with it is something that drives many European societies apart.  Although diversity per se is not an obstacle to social cohesion, it still makes cohesion more demanding. Because, despite diversity enriching our lives and increasing opportunities, meeting people with different traditions, backgrounds and customs could potentially cause tensions and conflicts.

Living together in diversity requires communication and negotiations processes to support lived values and different ideas of living together. Therefore, it needs to be actively designed.

A successful approach to diversity means, at the very least, that conflicts should be resolved non-violently. Ideally, people with different cultural identities will feel equally part of society, have the same opportunities to prosper, have a political voice and develop appreciative social responsibilities, not only among themselves but also beyond their group.

This gives rise to the responsibility not merely to tolerate and passively endure diversity but to recognise it and actively shape and includes requiring the observance of collective social rules and values by all those living in that society, as well as the setting of examples themselves.

Therefore, it is vital to practice respectful and appreciative interaction with one another, to counter discrimination and to ensure participatory opportunities are increased. This is all provided for by Germany’s Basic Law, which provides for a binding framework that supports coexistence in a diverse environment.

There is a need for structural measures, openness, tolerance and the positive recognition of diversity.

According to the Bertelsmann Stiftung’s study “Social Cohesion in Germany 2017,” about one in five Germans consider diversity to be threatening and are ambivalent about it. It is all the more important for various actors, such as political parties, trade unions or employers’ associations, to continuously communicate on the values and rules associated with coexistence.

Shaping values, which is key to developing democratic and human rights-related values in everyday life is, therefore, key to coexisting successfully in a diverse environment. Citizens here also have a duty to keep seeking exchanges and to engage in the necessary dialogues about values that are crucial for living together.

Of course, numerous civil society actors such as voluntary neighbourhood assistance centres and meeting centres, are already successfully shaping social cohesion. These activities need to be intensified and above all reach people who consider diversity to be a threat or are ambivalent towards it.

Thirdly, justice plays a central role when it comes to social cohesion. More specifically, it boils down to the subjective feeling of what members of society consider to be fair. If real inequalities are also perceived as unfair, there may be turmoils.

According to the Bertelsmann Stiftung’s study “Social Cohesion in Germany 2017,” only 16% of Germans believe that the distribution of economic goods is fair. According to the study, this perceived injustice corresponds to empirical data that points to actual inequality and a lack of participatory opportunities.

There is less social cohesion in areas with very high unemployment rates and where people live in poverty or are just above the poverty line.

In particular, an active civil society contributes significantly to a new cohesive society in the 21st century: Our guiding principle should be a society in which every individual can feel a sense of belonging, regardless of origin, age, gender, religion or social status.

Society needs civil society actors who are committed to peaceful coexistence characterised by equality, respect, tolerance and trust. These are essential components of our liberal democracy.

At the Young Europeans’ Forum, which took place in Berlin from 25-27 June and was organised by the Bertelsmann Stiftung and the Aladin Project in cooperation with UNESCO, around 100 young people from Europe who are involved in improving social relations on a full-time or voluntary basis discussed challenges and solutions for strengthening social cohesion.

They exchanged experiences, ideas, good practices and discussed solutions and ideas, which will help them improve social cohesion back home.

Participants agreed that that social cohesion begins with the quality of human encounters. Strong social relationships and networks are an essential cornerstone for this. This Young Europeans’ Forum and the ties that have been forged between these young actors are already a starting point to strengthening cohesion.

However, it also became clear that there is a need for structural promotion and support. Accordingly, we are eagerly awaiting activities from the Federal Ministry of the Interior, Building and Community, as one of the responsibilities of the ‘Community’ section is to strengthen social cohesion.

The Bertelsmann Stiftung stands for social cohesion that enables all people, regardless of their origin or religious and ideological orientation, to feel connected and included. It requires contacts, dialogue and exchange between people with different values, especially in towns and communities.

This is the only way to create trust and democratic coexistence. So let us oppose the centrifugal forces that affect European societies – Now!