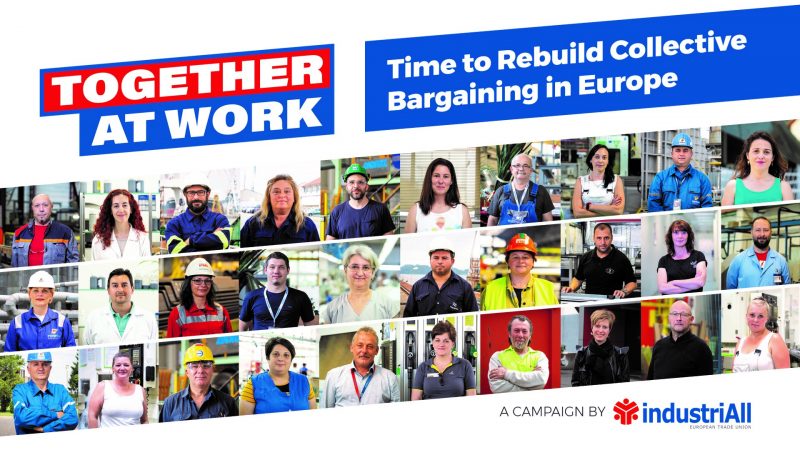 Following the crisis which began in 2008, collective bargaining was consciously attacked, by both national governments and European institutions, as a means to lower wages and restore profitability.

In the countries under Troika programmes, collective bargaining structures, and mechanisms aimed at extending collective agreements to all workers in a sector, have simply been dismantled. These policies have further contaminated other countries where governments have also interfered to undermine their national collective-bargaining systems.

The results are clear: a growing inequality, where in-work poverty, economic insecurity and precarious work are further exploding across Europe. The promised convergence between EU countries has not come to pass and as a result distrust towards the EU and national governments is not improving.

We need to create a model of social justice which reduces income inequalities, supports purchasing power, generates quality jobs and leads to an inclusive society. Collective Bargaining is an essential ingredient of this social model as it delivers fair and collective solutions for all.

Too often, debates about living standards overlook collective bargaining and, in doing so, disregards workers’ own agency in improving their lives and those of their families.

Speaking at our launch event, Federico Parrinello, shop steward from the FGTB Union at a Belgian glass factory, talked about how collective bargaining in his company means a shorter working week and full hospital insurance, whilst national bargaining has given them more rights for those injured at work.

Evelyn Regner, MEP, S&D, Austria, also emphasized that “wage rises happen because trade unions fight and negotiate for them… Collective bargaining needs to be at the front of everyone’s minds.”

Today, many European countries need to build or rebuild their collective bargaining systems in order to make sure that a large majority of workers will (again) enjoy the protection of collective agreements.

With our European campaign “Together at Work”, we want to show that Europe needs good collective bargaining, with good and solid structures, but also with strong trade unions and representative employers’ organisations that can negotiate good inclusive collective agreements that benefit for all.

At our event, Darko Davidovic from IF Metall Union highlighted that both and employers and workers benefit from the 97% coverage of collective agreements in Sweden. And Uwe Combüchen, Director General at Ceemet European Tech & Industry Employers, emphasized that “strong social partners make a difference”.

This is what the slogan of the campaign “Together at Work” reflects, specifically the meaning of collective bargaining: workers who come together at work and fight for better working conditions and pay represented by their trade union, which together with employers negotiate a collective agreement.

The campaign can we followed under www.togetheratwork.eu and will be broken down into six mini-campaigns, each lasting one month and focusing on specific target groups: workers, young workers, women, employers. In each month, new material linked to these mini-campaign will be distributed among our affiliates, in hundreds of companies, in conferences, on social media, in publications all over Europe.

This is a campaign of industriAll Europe, addressed to workers and to our members, but it is clear to us that we need political action at European level to strengthen collective bargaining. Hence, we have clear political demands.

First of all, to the European institutions, and the Commission in particular has to change the narrative that they followed during the period of crisis. Collective bargaining is not the problem, it is the solution to create a fairer Europe, with social progress for all.

It is also the tool to go through to the huge transformations which are present in our industries such as digitalisation, decarbonisation, climate action etc. We expect from Europe concrete action to support collective bargaining.

Therefore, we welcome the remark made at our launch event by Joerg Tagger, Head of Unit of Social Dialogue, DG Employment, that “the Commission wants to provide the basis for collective bargaining”.

Gabrielle Bischoff, MEP, S&D, Germany, also clarified that: “Whether the EU supports or destroys collective bargaining is nothing more than a political choice. This is a timely campaign to repair the harm that was done. The only way to address inequality in Europe is through giving workers a voice.”

Secondly, national and EU policymakers must adopt a public discourse on the value of collective bargaining and allocate dedicated national and EU support for capacity building on social dialogue and collective bargaining. And where not yet done, Member States must support and ratify ILO Conventions on the fundamental right to CB, as well as Council of Europe decisions on this topic.

At the launch event, Jenni Karjalainen, Special Adviser to the Minister of Employment Finland, emphasized how “It’s good to talk about collective bargaining and not just social dialogue… It’s true that work is the best tool to fight poverty, but only when there are decent jobs with decent pay”.

Marc Botenga, MEP, GUE/NGL, Belgium, also highlighted that “Collective bargaining doesn’t just bring benefits for workers but for the whole of society, but it needs to be backed up with action”.

For their part, employers can no longer refuse to sit at the negotiating table as they have been doing, for instance in some countries in Central and Eastern Europe. At our event, Florin Bercea, president of the FSLI Petrom Union, highlighted how foreign investors pressured the Romanian government to curtail workers’ right to negotiate higher pay – now the minimum wage in Romania is well below what you need to live.

Employers have to shoulder their responsibility and acknowledge that collective bargaining can also benefit companies, creating a level playing field which makes companies and economies more stable.

To conclude, we look into the mirror and we will do what we have to do as trade unions. We don’t put the responsibility solely on the shoulders of others. But, we also have to look to European and national policymakers, to employers, and we demand from them also a different approach, a constructive view and real support for meaningful collective bargaining.