By Anne van Schaik | Friends of the Earth Europe 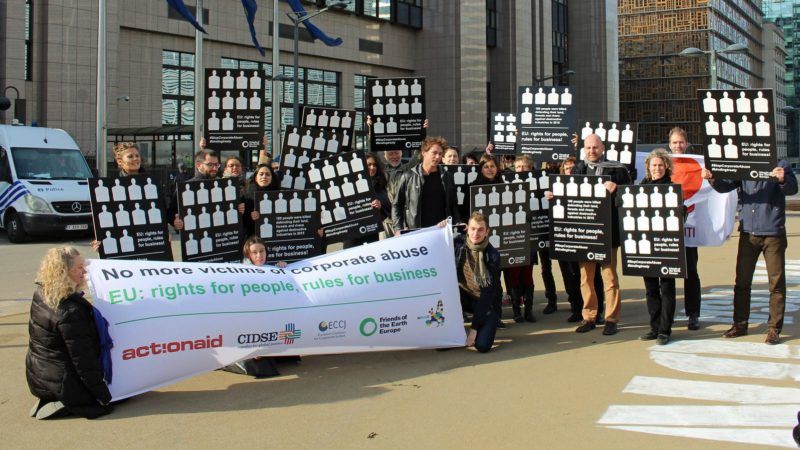 There are currently thousands of legally binding investment agreements to protect the interests of transnational corporations abroad, but no treaty to hold them to account, writes Anne van Schaik. [Friends of the Earth Europe / Flickr]

Would people still stop for a red traffic light or respect the speed limit if everyone knew they would not be fined? The same applies to corporate accountability, writes Anne van Schaik.

Anne van Schaik is a sustainable finance campaigner for Friends of the Earth Europe.

This week more than 200 representatives of global civil society, including victims of human rights abuses by corporations, joined the third session of the Open-ended Intergovernmental Working Group at the United Nations in Geneva on transnational corporations and other business enterprises with respect to human rights.

Subject to negotiations is a legally binding treaty that can hold corporations accountable, end their impunity for human rights and environmental crimes, and give people access to justice. It is about time to tip the scales: there are currently thousands of legally binding investment agreements to protect the interests of transnational corporations abroad, but no treaty to hold them to account.

The EU members of the Human Rights Council voted against the resolution initiating the process for a treaty in 2014, refused to participate in the 2015 session and eventually participated 2016. Although the EU delayed the start of the negotiations in 2017 because of procedural complaints, they did engage later on substance and raised technical questions.

The elements of the treaty provide essential suggestions on implementation and monitoring. We all know the many treaties and voluntary policies that convince on paper but fail in practice for lack of a strong implementation mechanism. Because after all, without implementation and enforcement, what would happen with current legislation? Would people still stop for a red traffic light or respect the speed limit if everyone knew they would not be fined?

The same applies to corporate accountability. For decades now, we have seen impressive policies or self-regulatory measures by companies and multi-stakeholder dialogues, categorically stating that they will respect human and environmental rights. Yet we hear from our colleagues in the South that these policies simply are not implemented.

This is why it is important that Ecuador, in its capacity of Chair-Rapporteur of the working group, has proposed in its elements an International Court on Transnational Corporations (TNCs) and Human Rights. This is a must. The reason for this is that we have repeatedly seen the failure of the national and international remedies that are currently at our disposal.

Take the case of Socapalm in Cameroon: For the past ten years, communities in Cameroon have been trying to stop the violations of their rights and the pollution of their environment by the palm oil company which is a subsidiary of transnational agribusiness giant SOCFIN. Supported by local organisations, they seized national contact points (NCPs) in Paris and Brussels. The company refused to comply with the NCPs’ recommendations. After several unsuccessful attempts to make Socapalm respect the rights of communities, the Belgian NCP issued a statement a few weeks ago regretting the multinational’s refusal to comply and ending the procedure. Victims are now left without any means of redress and condemned to suffer systematic violations of their rights every day.

An international court should have the competence to receive, investigate and judge complaints against TNCs for violations and abuses of human and environmental rights. This court should protect the interests of the individuals and communities who are affected by the operations of TNCs, including an assurance of full reparation and imposing sanctions on TNCs and their managers. This court’s rulings and sanctions should be enforceable and legally binding.

EU Member States are often genuinely surprised when we bring forward this demand for a new, yet to be established international court. But in reality, our demands are not outlandish. The same delegations remain straight faced when bringing forward at UNCITRAL, another UN body, the proposal for a Multilateral Investment Court which could once again enshrine investors rights in a legally binding way, with no obligations. The European Union has shown a lot of ambition in advancing this project, gathering more than 60 countries to explain its proposals in workshops and presentations around the world. It has also already estimated that it would contribute €5.4 million annually to the operation of the new corporate court. Why not invest this time, energy and money in the establishment of a UN treaty?

Towards the end of the negotiations, the EU yet again hindered the UN treaty process from moving forward, by objecting to a fourth session of the Intergovernmental Working Group in 2018 and proposing to have only consultations on the process. But civil society and many states insisted that a fourth session should and will be realised in 2018.

This position of the EU is unacceptable. The European Union  has an important role to play in the upcoming negotiations, especially in a time of rising isolationism. We therefore urge the EU and its Member States individually, to support the UN Treaty and show that Europe can champion multilateralism and human rights and business. Europe needs to embrace this historic opportunity to show its citizens and the whole world that it prioritises human rights, over the interests of big business.