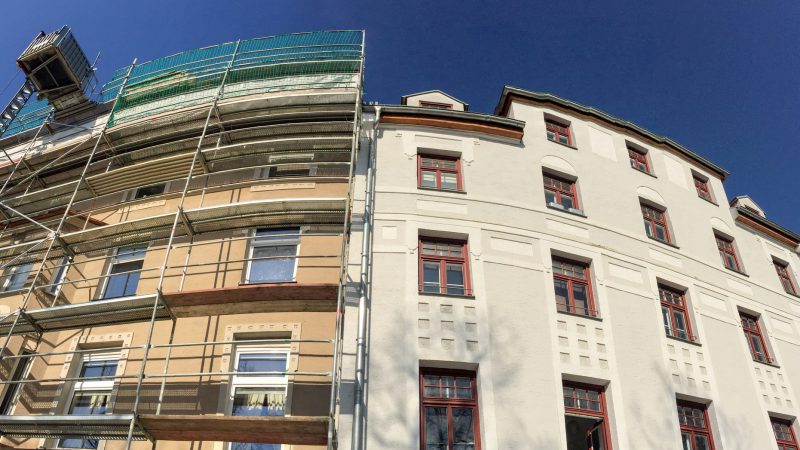 Wilhelminian style old residential building, facades before and after renovation. [Shutterstock/PIXEL to the PEOPLE]

Since housing is a fundamental right guaranteed at EU level, the bloc has to play its part and support cities and countries in tackling the housing crisis, providing affordable, adequate and sustainable housing, writes Kim van Sparrentak.

Kim van Sparrentak is a Dutch Member of the European Parliament for the Greens/EFA group. She is the rapporteur for the Parliament’s report on Access to Decent and Affordable Housing for All.

Europe is in the midst of a housing crisis. From Paris to Warsaw, Dublin to Athens, an increasing number of people in the EU are struggling to afford the rising cost of housing. Even before the start of the pandemic, one in 10 Europeans were spending more than 40% of their income on housing.

In urban areas, in particular, many people find themselves in a dire situation and are driven out of the city. Also, the quality of housing is often deplorable. Far too many people in Europe are living in overcrowded dwellings and damp or poorly insulated homes, with unaffordable utility bills.

That’s why the European Parliament has this week adopted its report ‘access to decent and affordable housing for all’. The next step is for the European Commission to take up the gauntlet and ensure that housing rights are put before market interests.

Access to housing is a fundamental right that is guaranteed at EU level by the Social Charter and is a part of the European Pillar of Social Rights. The EU’s economic governance framework and its rules on banking, competition and consumer protection have a major impact on the housing market.

It has become painfully clear to me, as rapporteur on this topic in the European Parliament, that European rules today are often better at protecting the making of profit on the housing market, than at protecting people who need a roof over their head. This has to change.

There’s an economic and social crisis unfolding and we find ourselves at a crucial moment when housing insecurity and household debt are rising. Many Europeans were evicted from their houses during the financial crisis that started in 2008. Investors were quick to sweep up this housing as an ‘investment opportunity’.

We must by all means avoid a repetition of this horror scenario with the economic downturn that is taking place as a result of the pandemic. This is why action is needed now. The European Commission should swiftly turn the proposals of the European Parliament into action.

An Integrated Strategy on affordable housing

The Commission should, when proposing the new fiscal rulebook, follow up on the European Parliaments’ call to allow for more public investments and the European semester should set affordable housing as an important policy goal. Investment in affordable, social and energy-efficient housing should be a priority for the EU budget and the economic recovery.

Tackling financialisation of the housing market

Rather than a fundamental right to be guaranteed for all, housing has increasingly been considered a market to make profits through speculative acquisitions and the so-called financialisation of the housing market, especially in cities, where investors such as Blackstone treat housing as a tradeable asset.

This has a dramatic effect on prices. The European Commission should evaluate the impact of EU rules on financialisation, ensure better transparency on real estate transactions and ownership and put forward proposals to better protect mortgage borrowers from eviction.

The European Parliament gives its full support to the Renovation Wave that was launched by the European Commission.

We know massively investing in housing renovation is good for climate and jobs, but it also can get people out of energy poverty and into decent homes by focusing efforts on social housing and on the least energy-efficient houses.

Ensuring this does not lead to increased housing costs or gentrification should be central in its implementation.

To realise the full potential of this strategy, the European Commission should further increase its ambitions and aim to achieve a deep renovation of 3% of the European building stock per year, improving the energy performance of these buildings by at least 60%. It’s been calculated that this can create 2 million jobs.

An EU goal to eradicate homelessness

Everyone has the right to a home. Homelessness is an extreme form of poverty and a violation of human rights. Homelessness has almost doubled in the EU over the last ten years. The Commission should take stronger action to support member states in reducing and eradicating homelessness and propose a goal to end it by 2030.

In the coming six months, the Commission will propose its action plan on the European Pillar of Social Rights, that addresses homelessness in its Principle 19, and the topic is high on the agenda of the Portuguese presidency. The Commission should be bold and dare to propose a social ‘moonshot strategy’.

People were already struggling to afford a proper roof over their heads before the pandemic and it has only made the importance of a decent place to call home more clear.

With this strong signal by the European Parliament, the European Commission can no longer hide behind the fact that the EU has no “direct competence” on housing and should use all policy tools it has at its disposal to fight the housing crisis.