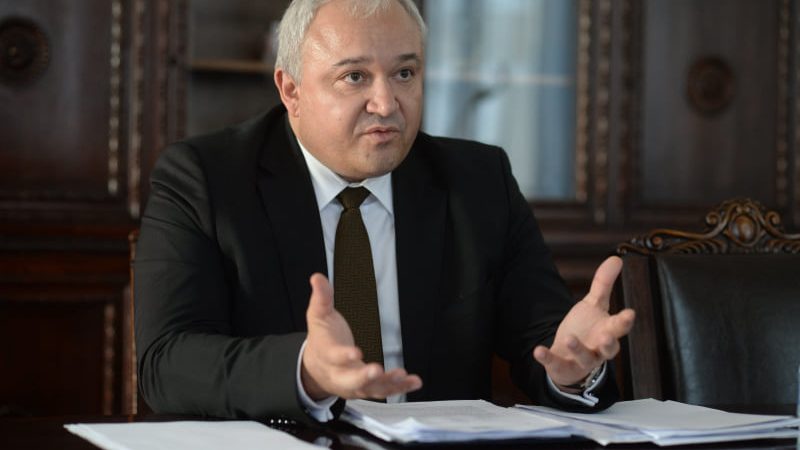 In an exclusive interview for EURACTIV Bulgaria, the caretaker justice minister Ivan Demerdjiev offered scathing criticism of Prosecutor-General Ivan Geshev, saying that unless he is removed, Bulgaria risks losing access to EU funding.

In the summer of 2020, Bulgarians took to the streets, demanding the resignation of  Prime Minister Boyko Borissov and Ivan Geshev, the prosecutor general seen as the guardian of Borissov’s status-quo. Borissov lost power after the 4 April elections, but Geshev is still in office.

“I can’t wait to give Ms. Laura Kovesi (the head of the European Prosecutors’ Office) the opportunity to work directly with the Bulgarian investigative bodies, so we will be able to compare the work of the two institutions.”

As chairman of the Plovdiv collegium of advocates, Demerdjiev opposed the appointment of Geshev as prosecutor general in 2019.

The following year, Demerdjiev was a lawyer for a foreign national who had invested in a photovoltaic park in Bulgaria. He said a private security company called Delta Guard came and took possession of the park by force, with no reaction from the state bodies, the police or the prosecution.

One of the owners of Delta Guard, Demerdjiev said, “threatened me with the prosecutor general. In the sense that if I somehow try to create problems and actively work in defence of my client, someone can send a signal to the Prosecutor’s Office and then I will be sorry for what will happen”.

“To my question of what will happen, he replied that I had led protests against the prosecutor general and what will happen is clear and I should be able to understand it.”

“Apparently, I have already come under the scrutiny of the Prosecutor General or his circle, so to speak. The threats I’m talking about were shared with one of the park guards, who signed a declaration of what he was told, of the threats against me. I gave this declaration in two police files, which went to the prosecutor’s office”, he said.

But he complained that there had been no follow up, except for the embassies of Germany and Austria, “who followed the case closely”.

The problem with the chief prosecutor in Bulgaria, Demerdjiev explained, is that under the Constitution, the office is invested with enormous power, but without any democratic scrutiny of its activity.

“For years, a solution has been sought for how a person endowed with such enormous power can be restrained. The Commission is asking us why for so many years we have been unable to find a mechanism that works.”

“The most cardinal decision is not to have a person who has such great power. This idea comes from them [the Commission], but also from the fact that for so many years we have not seen any of the chief prosecutors exercise their power for the benefit of society.”

“At best, nothing happened. In bad cases, we saw what is happening now, what I am describing. How some people are charged very quickly, how they are detained, while for others this is impossible.”

Asked how this would affect the disbursements of funds from Bulgaria’s recovery plan, he said:

“Brussels tells us that without solving this problem [with the Prosecutor’s powers], we will not receive money under the recovery and sustainability plan. No money at all.”

Asked about possible pressure from Western European countries, in particular, Germany after their elections, he said “they are losing patience because we have been lying to them for too long”.

Demerdjiev also talked about the ‘golden passports’, a scheme under which Bulgaria gives passports to third-country nationals in return for investments. Demerdjiev was adamant that the so-called “investments” were a sham and the system of checking whether the investments were real was flawed.

“Here we are not talking about classic investments that develop the Bulgarian economy, but about putting some money, sometimes virtual, for a few days in one place, which then goes back home. This is a humiliating system that has continued because it has brought benefits to the people who made it”, he said.

Asked who these people were, he said his ministry had sent a signal to the State Agency for National Security (DANS) to check a large number of these cases.

“I very much hope that the law enforcement authorities will name those who profited. It is clear that politicians were involved in this scheme. The spheres of influence with regard to Bulgarian citizenship and who exercised this influence are clear to a large part of Bulgarian society”, he said.

Demerdjiev said he expected DANS “at any moment” to make public the real results from the so-called investments promised in return for passports.

“In the last few months, DANS has issued opinions that some of the candidates for Bulgarian citizenship pose a threat to national security and they did not receive approval. It is strange how people from all over the world would want to become Bulgarian citizens, and in the best case, they have come to Bulgaria only once. They are from all over the planet. You cannot imagine. There is almost no country in the world from which there is not someone with a golden Bulgarian passport.”