Márki-Zay: My government would be ‘grand prize’ for the EU 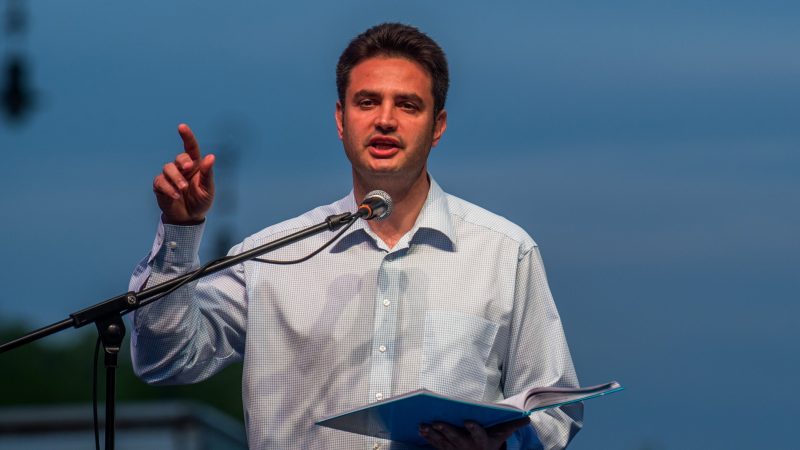 This article is part of our special report Orbán’s potential challengers in Hungary pledge pro-European course.

A Hungarian government with Péter Márki-Zay at its helm would be like winning the “grand prize” for the EU, the independent Christian conservative mayor of Hódmezővásárhely told EURACTIV in a phone interview.

Péter Márki-Zay is one of the two candidates in the race for the joint opposition contender to challenge Viktor Orbán and his ruling Fidesz party in next year’s elections.

The interview was edited for length.

What would a Márki-Zay government mean for the EU?

Well, I think it’s the grand prize for the EU. My commitment is to the European Union, to membership, to values, to the accession to the European Public Prosecutor’s Office (EPPO), which I first raised in a joint 12-point declaration with several others on 15 March 2018. Then, under the leadership of my friend Ákos Hadházy, we collected hundreds of thousands of signatures in favour of joining EPPO.

Now, like [the other opposition PM candidate] Klára Dobrev, I have taken a strong stance in favour of the introduction of the euro as soon as possible. The letter that the candidates for prime minister jointly wrote to the leaders of the European Union in the summer was filled with content by me. I made my colleagues promise that we would extradite the criminals, international fugitives, hosted by Viktor Orbán, that we would be loyal members of NATO and the European Union. For me, this is a moral and not a political question.

The four principles to which the future of Hungary must adhere are democracy, the rule of law, the market economy and European integration. So among these is the closest possible cooperation with the European Union. I myself would also like to see the effectiveness of cooperation and European functioning improved and increased. To take an example, I do not consider it necessary to have 27 embassies in Bogota or Islamabad. The European Union has not yet reached the point, today, where the Austro-Hungarian Monarchy, or Austria-Hungary as it is known in English, was in 1867, when we had a real common — not only a common currency, but also a common treasury, — defence and foreign affairs. I would say that if the Austro-Hungarian Monarchy in 1867 was ahead of the European Union today, then I think the Union still has to take serious steps towards integration.

I also find the democratic deficit intolerable. I am sure it was one of the most compelling arguments for Brexit. It is unacceptable that the European Union is not a democracy of 500 million people but of 27 heads of government. And that Viktor Orbán can, in one person, prevent a moral stand in issues such as the Uyghurs or the freedom of Hong Kong from being taken, hat one head of government can prevent that.

Last year, the European Commission put forward a pact on migration. It is now completely deadlocked. Do you support Fidesz’s hardline migration policy? And what will you do about the EU migration pact if you become prime minister?

First of all, unfortunately, I don’t know the details of the European migration pact. But let’s talk about the migration policy of Fidesz. I am critical of Fidesz’s migration policy not only because it has kept the thousands of refugees it has taken in inhuman and inhumane conditions, and has made them an enemy of Hungary and, indeed, of our nation, because they could, rightfully, feel that they were not being treated as human beings, but as prisoners. Beyond that, I also criticised the fact that, while they were conducting hate campaigns against migrants in a very inappropriate way, they were settling migrants in Hungary by the tens of thousands.

I can accept the fact that Viktor Orbán said already 20 years ago that Hungary needed one million migrant workers to maintain economic development, and he is obviously making good progress in this direction. He has settled 20,000 migrants in Hungary with a settlement policy. Namely Fidesz-allied interests won €150 billion there, while the state has lost 17 billion. They let in without proper screening people who are criminals or Islamist terrorists on international wanted lists. The best known of these lately is [honorary consul of Jordan in Hungary] Zaid Naffa. But they also took in [former Macedonian Prime Minister Nikola] Gruevski, who is an international fugitive.

So, on the one hand, Fidesz is waging a hate campaign against migration and, on the other, it is taking in wanted criminals and terrorists indiscriminately. So I think it is very important that the whole of the European Union is aware of what Viktor Orbán is really doing, and not just his declaratory policy. I think we need to change both. We need to be humane with the refugees that Orbán has brought in and we must not let criminals into Europe. The question is what I would consider to be right in terms of migration.

I have lived in the United States, but I have also lived in Canada, and I consider the Canadian immigration policy to be absolutely right in the sense that when they decided to help, to take people in for humanitarian or other reasons, they were so thoroughly vetted. They took in 40,000 refugees from Syria, for example, but those 40,000 people were screened for almost a year by around 500 embassy staff to ensure that they did not include terrorists like those that Orbán brought into Europe. And, of course, there are integration programmes in Canada — I myself was a Canadian immigrant in 2004 — and public service and support, as well as a culture, that helps integrate those who are admitted and helps second-generation immigrants, at the latest, to feel Canadian and to call Canada home.

Hungarian society has become very fragmented under the Fidesz government, and even if the opposition wins, there will be a lot of work to do for national unity. How do you plan to do that and to speak to those who may have voted for Fidesz?

Well, first of all, within the opposition, I would like to emphasise that I am the only politician to my knowledge who regularly praises Fidesz for its positive actions and also criticises the reprehensible actions of the opposition. Our values are not determined by whether an action is committed by Fidesz or the opposition, but by whether or not it is morally acceptable. Consequently, I have retained Fidesz leaders in [the town of] Hódmezővásárhely, who are not involved in corruption and who faithfully carry out the tasks entrusted to them, and we have had very good cooperation ever since.

We do not appoint city leaders and public companies on political but on professional grounds. So, as I did there, I also believe here that the opposition is in great need of those experts who, under the Fidesz government, could have been able to do a lot for the country in some administrative or expert position, or have actually done so. With this attitude, we can ensure that social peace will come to Hungary and that the corruption of Fidesz will not be replaced by the corruption of the opposition before 2010, but that we will truly clean up Hungary from corruption.

The EU has taken a strong stance on LGBTQ rights, the issue has been on the agenda in the last six months, partly due to Fidesz but also Poland, and the current Hungarian government is fighting with Brussels over the rights of sexual minorities. Will you follow in Fidesz’s footsteps or will you take a different position on this issue?

Well, first of all, I would like to deny that I have supported Fidesz policy in any way. In contrast to those who thought that flying a rainbow flag would stop the Fidesz hate campaign, I have regularly pointed out how Fidesz takes a disingenuous stance on this issue, too. While, by the way, the leaders and politicians of Fidesz have voted for same-sex civil partnerships back in ’97 I think, at the time as liberal politicians, as far as we know, their party has the largest number of gay politicians in Hungary. And since József Szájer being caught [in a sex party] in Brussels, I think that it is not just me who knows this, but also insiders who know quite a few people in the party and even in the government. That is to say, they are conducting hate campaigns against gays despite the fact that their own ranks, for example, have the largest number of gays in politics. […]

I would like to say that I have said many times, just in the spirit of taking a stand, that I would like to see a country where even Fidesz politicians can openly embrace their homosexuality, because there is no shame in that. I think that this strong statement, this strong position, is something that everyone should bear in mind when they want my opinion.