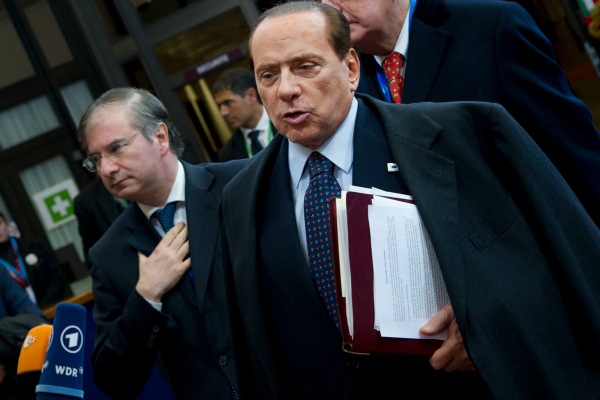 An Italian Supreme Court ruling that bans Silvio Berlusconi from running for election for the next six years could set off a struggle for the leadership of his party, although odds are good that another Berlusconi will succeed the ex-prime minister.

Italian commentators are speculating that Marina Berlusconi will be her father’s heir to the throne of the People of Freedom (PDL) and will re-launch the party under its original name, the Forza Italia (Go Italy). PDL is affiliated with the centre-right European People’s Party in the European Parliament.

If Marina Berlusconi does take over, it would trigger comparisons to another famous father-daughter political team, the Le Pens in France. Marine Le Pen succeeded her father Jean-Marie as leader of the far-right Front National (FN) in 2011.

Listed by Forbes magazine in 2007 as the world’s 33rd most powerful woman, Marina plays an important role in her family's business: In the 1996 she joined Fininvest, the Berlusconi family’s holding company, and became chairwoman in the 2005.

Marina Berlusconi, who turns 47 on Saturday and is the oldest of the billionaire businessman’s five children, also has been chairwoman of the Mondadori publishing house since 2003 and she was a director of Mediobanca, an investment bank, until 2012.

She is appreciated by women of the party, such as Laura Ravetto, who said: “Marina is the heir of Silvio Berlusconi.”

She is also supported by Angelino Alfano, who was until recently was thought to be the most likely successor. Alfano, in an interview on the television programme Porta a Porta, said: "Berlusconi is a name, a brand, an assurance."

Yet not all the party is favourable to another Berlusconi taking over. Renato Brunetta, party leader in the lower house, said: "I don’t like dynasties, be they monarchical or republican," he told the Corriere della Sera newspaper.

Brunetta, along with some other People of Freedom deputies, aren’t quite ready for Silvio Berlusconi to step aside as leader of the party. They are lobbying Giorgio Napolitano, Italy's president, to pardon Berlusconi.

Marina appears to agree with them: The Financial Times on Monday (5 August) quoted her as saying that political leadership cannot be inherited or transmitted through a dynastic investiture. There is an abyss between following politics… and engaging directly, a gap I have never remotely thought of bridging."

Meanwhile, Foreign Policy magazine said Marina Berlusconi could be the leading competitor of Matteo Renzi, the younger and more progressive candidate for the Democratic Party – a main rival of the centre-right People of Freedom – at the next elections. According to the magazine, Marina could count on the support of powerful business interests as well as her father’s long-time supporters.

Even if there is opposition within the People of Freedom to a family succession, without a Berlusconi at the head of party, its fortunes are uncertain, Giovanni Orsina, historian and professor at Luiss Guido Carli University in Rome, told the Financial Times.

Silvio Berlusconi, 76, reacted angrily on 2 August when the supreme court rejected the billionaire's appeal against a conviction for tax fraud. "No one can understand the real violence which has been directed against me," he said in a message broadcast on Italian television after the verdict. "A genuine campaign of aggression that has no equal."

Silvio Berlusconi turned a successful business career into a platform for politics. In 1994, few months before elections, he founded Forza Italia and went onto win, but his government soon collapsed when an ally withdrew support.

In the subsequent election, he was defeated by Romano Prodi, a centre-left candidate. But that was not the end of Berlusconi. He returned power others two times, in the 2001 and again 2008, after losing another election to Prodi in 2006.

But his political ventures were always dogged by tax and legal problems. In 2011, Berlusconi was hit by a sex scandal known as 'Rubygate', after the name of an underage prostitute. With the Italian economy teetering and fears of a eurozone meltdown looming, he resigned in November and was succeeded by a government of technocrats headed by Mario Monti.

Berlusconi was not a candidate in the 2013 elections but he agreed to break a stalemate in the formation of a government by supporting the coalition led by political rival Enrico Letta.