After ‘Mercron’: What German elections could mean for the Franco-German tandem 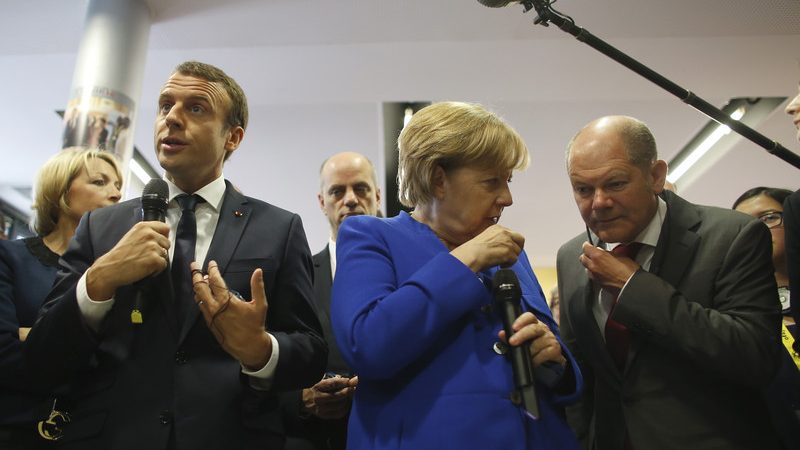 As the 16-year Merkel era comes to an end, the Franco-German partnership in the EU is at a watershed. [MATTHIEU ALEXANDRE/EPA]

With the era of Angela Merkel coming to an end, both the Franco-German relationship and the role of the Merkel-Macron tandem in the EU are at a watershed. For the moment, France seems to be holding its breath.

One thing is sure: after Sunday’s (26 September) German elections, Paris will follow the course of German coalition negotiations very closely, according to Joachim Schild, a professor at Trier University specialising in Franco-German relations in the EU.

For now, it is still unclear which parties will form Germany’s future government. Most analysts see an alliance of the Greens and the liberals (FDP) with either the social democrat SPD or the conservative CDU/CSU as most likely.

“From the French side, there are reservations about the participation of the FDP in government,” Schild told EURACTIV, explaining that, for many, the party “stands for a hard line in economic and financial policy, which is sometimes interpreted as national-egoistic”.

The liberals oppose key projects of France’s EU policy, such as EU-wide common debt or a European deposit guarantee, the building block missing for the completion of the European Banking Union.

In contrast, SPD’s lead candidate, former finance minister Olaf Scholz, would be quite well received by the French, Schild explained. This is despite him not embodying the role of the Francophile European as much as his conservative competitor Armin Laschet.

“Scholz has shown himself capable of adapting to French partners, some of whom have taken quite divergent positions from his own, and has found a working method for dealing with differences,” he said, adding that the current finance minister had established a trusting and close relationship with his French counterpart, Bruno LeMaire.

Schild said that Scholz’s role as finance minister while hammering out the pandemic recovery package, for which the EU took up common debt for the first time, was likely to win him points in Paris.

Connected to the suspension of the national debt brake during the crisis, Scholz’s openness towards common EU debt represents a departure from Germany’s traditional stance of fiscal rigour. For Schild, it remains to be seen whether Scholz will act “more like a Social Democrat or more like a German finance minister”.

On the French side, politics seems to be holding its breath for the time being. For France, which will assume the presidency of the Council of the EU on 1 January 2022, a lot depends on whether Germany has a government capable of winning a majority by the end of this year – and which parties will be in it.

The Macronist leadership wants to make its mark on issues of the European Stability Pact and strategic autonomy. Depending on which parties form the future coalition in Berlin, Paris will have more or less room for manoeuvre.

But despite the pressing situation for France, there has been a conspicuous silence among French politicians since the election results were announced. On election day (26 September), Emmanuel Macron tweeted about vaccines in Africa, French cyclist Julian Alaphilippe’s world championship title, and the Global Citizen Live event – but the president did not utter a single word about the German elections.

Not surprising at all, according to Éric-André Martin, secretary-general of the Franco-German Relations Study Committee (Cerfa) at the French Institute of International Relations (IFRI), interviewed by EURACTIV. After his election as president in 2017 and the federal elections that same year, Macron had turned to Germany full of expectations – only to find his youthful enthusiasm stifled by Angela Merkel’s dry reticence, Martin said.

His famous speech at the Sorbonne on 26 September 2017, in which Macron expressed his hopes for a more dynamic EU, had simply “fallen flat,” he added.

The mistake of having been too pushy and expectant too soon must be avoided this time, said Martin. Paris must be able to “send clear signals to Germany without giving the impression of wanting to interfere in internal affairs.”

As long as it is not clear who will lead Germany as chancellor, he said, France must avoid rash gestures.

Since coalition negotiations are expected to last for months, Paris must remain patient and “keep its nerve”. Because even if the time after the elections is often perceived as a power vacuum abroad, these months are actually of great importance as they form the pillars of German policy and make the country “governable” for the next four years.

It was necessary, he said, to remember that Germany is by no means experiencing a power vacuum after the elections. After all, the “old” government continues to take care of ongoing affairs.

Franco-German relations are therefore not on ice for months, “there is a strong culture of dialogue and cooperation” between the countries, Martin said, “and at the administrative level, this cooperation continues as usual.”